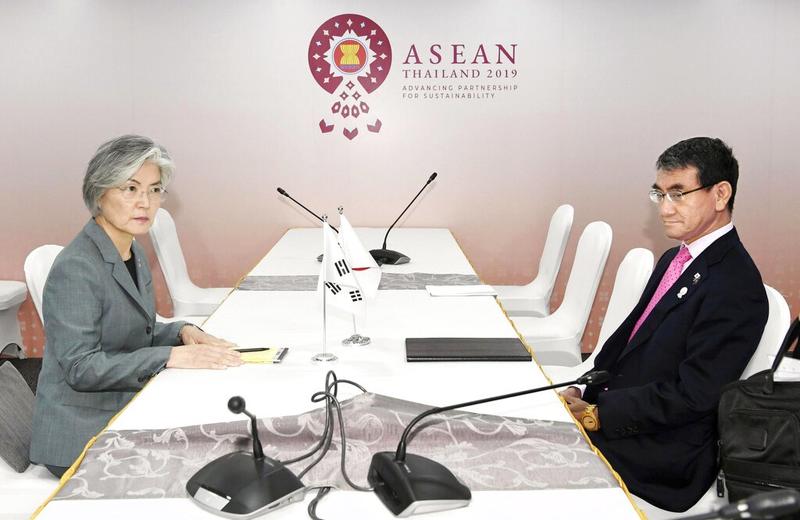 Japanese Foreign Minister Taro Kono, right, and his Republic of Korea (ROK) counterpart Kang Kyung-wha sit at a table for a bilateral meeting on the sidelines of the ASEAN Foreign Ministers Meetings in Bangkok, Thailand, Aug 1, 2019. (NAOHIKO HATTA / KYODO NEWS VIA AP)

BANGKOK/SEOUL — The Republic of Korea (ROK) warned on Thursday that security cooperation with Japan might be hurt if it removes ROK from its list of countries that face minimum trade restrictions, after talks failed to narrow their differences.

Relations between Japan and the ROK are arguably at their lowest since they normalized ties in 1965, with a spiralling diplomatic and trade row threatening to disrupt the global supply of semiconductors and undercut security cooperation on the Democratic People's Republic of Korea (DPRK).

ROK Foreign Minister Kang Kyung-wha held talks with her Japanese counterpart, Taro Kono, in Bangkok but the talks yielded little progress, with an official at ROK's foreign ministry saying there was "virtually no change" in Japan's stance

ROK Foreign Minister Kang Kyung-wha held talks with her Japanese counterpart, Taro Kono, on the sidelines of a Southeast Asian conference in Bangkok on Thursday.

The 55-minute talks began with a frosty greeting. Both Kang and Kono appeared stony-faced as they shook hands, and Kang focused on reviewing documents she brought before making opening remarks, shunning eye contact.

The meeting was the highest-level talks since Japan tightened curbs last month on exports to the ROK of high-tech materials, accusing its neighbor of inadequate management of sensitive items.

The export restrictions came as Japan was already angry about a ROK court ruling last year that Japanese firms had to pay compensation to ROK people forced to work in Japanese factories during Japan's occupation of the Korean Peninsula from 1910 to 1945.

Japan says the issue of compensation for its wartime actions had been settled by a 1965 treaty and it asked the ROK to seek international arbitration to resolve the dispute.

The Bangkok talks yielded little progress, with an official at ROK's foreign ministry saying there was "virtually no change" in Japan's stance.

Kang said she urged Kono to stop the process or it would force the ROK to craft countermeasures. 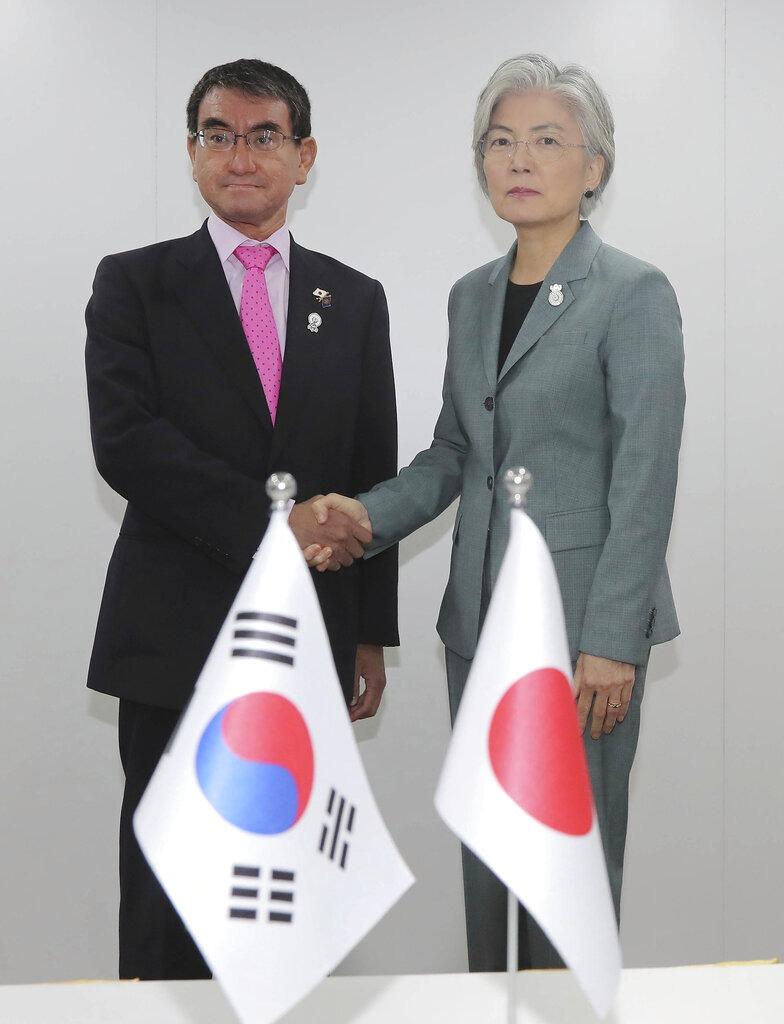 Japanese Foreign Minister Taro Kono, left, and his Republic of Korea (ROK) counterpart Kang Kyung-wha pose for a photo prior to their bilateral meeting on the sidelines of the ASEAN Foreign Ministers Meetings in Bangkok, Thailand, Aug 1, 2019. (LEE JUNG-HOON / YONHAP VIA AP)

ROK officials have warned they may reconsider an intelligence sharing accord with Japan if the feud worsens.

The bilateral accord, known as the General Security of Military Information Agreement (GSOMIA), was signed in 2016. It is automatically renewed every August, and is chiefly aimed at countering DPRK's nuclear and missile threats.

As Japan cited security reasons for its trade restrictions, I said we will have no option but to review the various frameworks of security cooperation with Japan.

"As Japan cited security reasons for its trade restrictions, I said we will have no option but to review the various frameworks of security cooperation with Japan," Kang told reporters, when asked whether the ROK would keep the GSOMIA if it was dropped from the Japanese list.

"I made it clear that we need the time and room to make efforts to find a way to resolve the issue through consultations."

There was no immediate comment from Japan's foreign ministry.

Japan's Kyodo news agency reported Kono had asked the ROK to take steps to prevent any damage to the Japanese firms ordered to pay compensation to former laborers.

A Japanese government source said that Tokyo's stance was to try to keep the trade and history dispute separate from security matters, including the renewal of the GSOMIA.

ROK's spy chief, Suh Hoon, called for caution in nullifying the GSOMIA, telling a parliamentary intelligence panel that it had both "practical benefits and symbolic meanings", said Lee Eun-jae, a lawmaker who attended the meeting.

Any change in security cooperation between Japan and the ROK would likely worry the United States, which played a key role in initiating the hard-won GSOMIA, which facilitates three-way intelligence sharing.

The United States has urged the ROK and Japan to consider reaching a "standstill agreement" to forestall any further action and allow time for negotiations, a senior US official told reporters on Tuesday.

US Secretary of State Mike Pompeo also said he would encourage "a path forward" when he joins Kang and Kono for a three-way meeting in Bangkok, though Kang has said it "wouldn't be easy" for the United States to mediate openly.

"We've made clear to the Japanese side that for now we need to buy time for a diplomatic solution," the ROK foreign ministry official told reporters after the meeting with Kono. 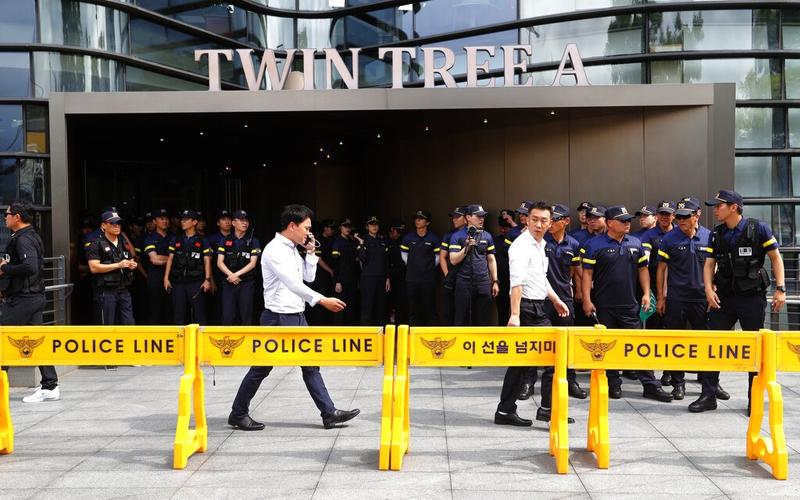 The Republic of Korea (ROK)'s police officers stand guard for possible rallies against Japan in front of a building which houses the Japanese embassy in Seoul, ROK, Aug 1, 2019. (AHN YOUNG-JOON / AP)

In downtown Seoul, police said a 72-year-old ROK man is in critical condition after setting himself ablaze, apparently to express his anger toward Japan amid worsening tensions, AP reports.

An official from Seoul's Jongno Police Station said the man was being treated at a Seoul hospital for burns over his entire body.

The official said police at the scene found a bag that likely belonged to the man and contained a memo and leaflet criticizing Japan over its decision to tighten controls on high-tech exports to the ROK and vowing to fight Tokyo until Japanese Prime Minister Shinzo Abe apologizes, according to AP.

Also inside the bag was a book about the late Kim Bok-dong, who was one of the first victims to speak out and break decades of silence over the Japanese military's sexual slavery during World War II, according to the police official, who didn't want to be named, citing office rules.

Thursday's incident came a day before the Japanese government was widely expected to remove the ROK from its "white list".

ROK's removal from the Japanese preferential trade list could have a broader impact as it would require Japanese companies to apply for case-by-case approvals for exports to the ROK of hundreds of items deemed sensitive, not just the three materials affected by the trade curbs that took effect July 4. It will also allow Japanese authorities to restrict any export to the ROK when they believe there are security concerns.