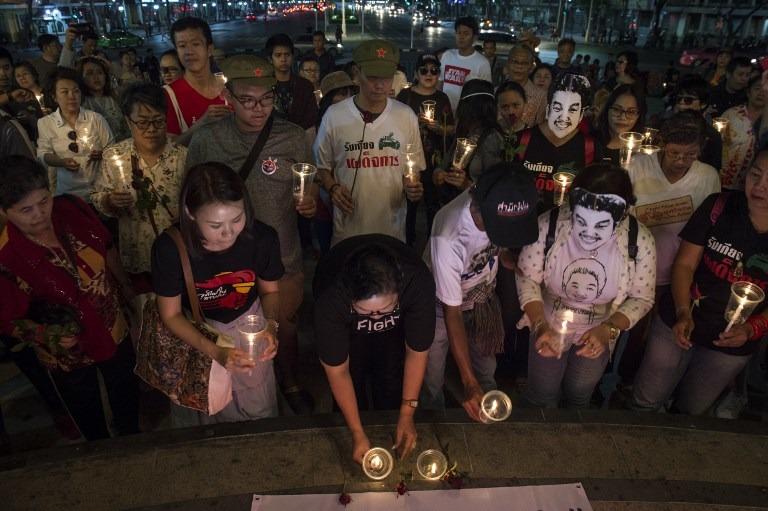 Thai protesters lay candles during a protest against the Thai military's ongoing rule in front of the Democracy Monument in Bangkok on Dec 10, 2017, as they commemorate Thailand's Constitution Day. (LILLIAN SUWANRUMPHA / AFP)

BANGKOK - Pro-democracy activists on Saturday repeated calls for the government under Prime Minister Prayut Chan-o-cha to hold a general election within this year.

Hundreds of people peacefully gathered on the campus of Thammasat University where the young activists continued to press for the government and National Council for Peace and Order (NCPO) to no longer put off the nationwide election and to hold it within this year.

Last year, Prayut pledged to hold the election in November this year but the pro-democracy activists and media feared that it might be put off for another 90 days due to the amendment to an organic law governing the election of MPs.
Calling themselves the Democracy Restoration Group and the Group of People Who Want to Vote, the activists managed to distribute masks of long-nosed "Yutnocchio", an imitation of the fictional Pinocchio, to the demonstrators to put them on and be photographed at the rally spot on the university's Tha Phrachan campus.
The crowd shouted "election this year" as the media's photographers took pictures of them wearing the "Yutnocchio" masks.
Pro-democracy activist Sirawit Serithiwat charged that Prayut has acted "just like Pinocchio" because, he said, the premier had lied to the Thai people and the world community about the election which he had postponed for several times over the last four years.

In sustained effort to press for the election within this year, the activists earlier vowed to continue to organize the peaceful gathering of demonstrators on Saturdays of next month and May.
They planned to culminate their planned protest on May 22 -- the date on which the NCPO, headed by the then-army chief Prayut, staged a coup to overthrow former premier Yingluck Shinawatra's government four years ago.