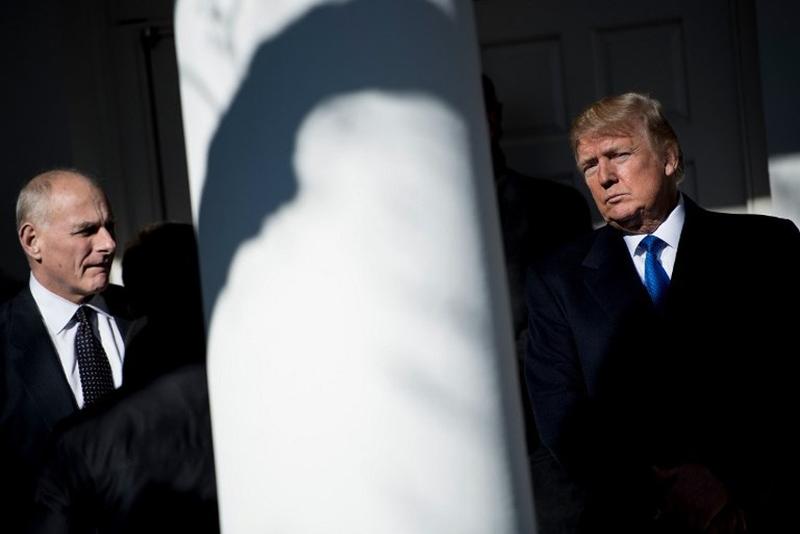 In this Jan 19, 2018 photo, White House Chief of Staff John Kelly, left, waits for US President Donald Trump to speak live via video link to the annual "March for Life" participants and anti-abortion leaders from the White House in Washington, DC. Amid reports on relationship strain, President Trump on Jan 23, 2018 spoke highly of Kelly for his job performance. (BRENDAN SMIALOWSKI / AFP)

WASHINGTON – US President Donald Trump Tuesday spoke highly of White House Chief of Staff John Kelly for his job performance, amid reports that their relationship had become tense.

"Thank you to General John Kelly, who is doing a fantastic job, and all of the Staff and others in the White House, for a job well done," Trump tweeted.

"Long hours and Fake reporting makes your job more difficult, but it is always great to WIN, and few have won more than us!" he added.

The president's tweet came a day after Vanity Fair, a US news and commentary magazine, reported Monday that Trump's relationship with Kelly "may finally have gone past the point of no return" and that his daughter, Ivanka, is helping to find Kelly's replacement.

Kelly, according to the report, has expressed "frustration with Trump's freewheeling management style and habit of making offensive statements."

White House Press Secretary Sarah Huckabee Sanders disputed the story, expecting Kelly "not just be here for the next three years but for the next seven years."

The retired Marine Corps general also appeared to have angered Trump by suggesting the president's stance on immigration had "evolved" with regard to Trump's proposed wall along the US border with Mexico.

"Campaigning and governing are two different things and this president has been very, very flexible in terms of what is within the realm of the possible," Kelly told a Fox News interview last week.

But he was directly contradicted by Trump on Twitter the following day.

"The Wall is the Wall, it has never changed or evolved from the first day I conceived of it," the president wrote in a series of tweets at that time.

Kelly, 67, was brought in to the White House last summer to replace his predecessor, Reince Priebus, amid great expectations that he would bring discipline to the once chaotic West Wing.

Before that, he was Trump's first secretary of homeland security.