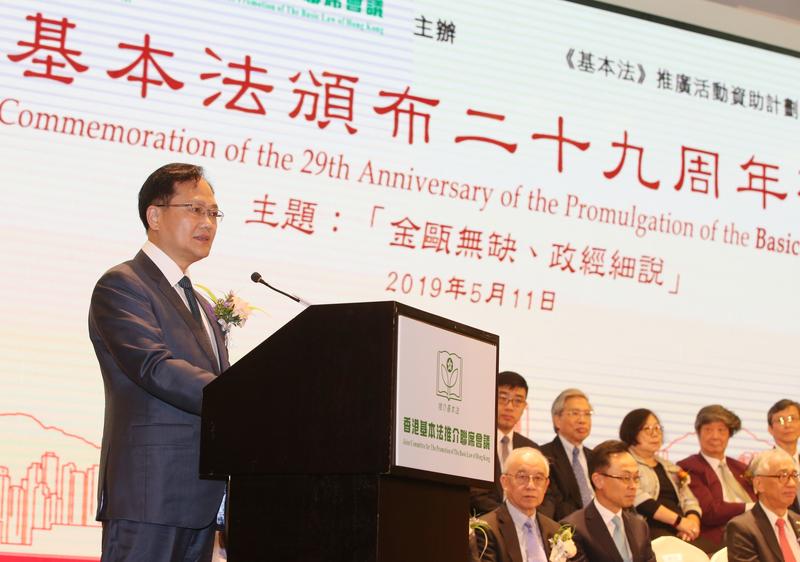 Chen Dong, deputy director of the Liaison Office of the Central People's Government in the HKSAR, delivers a speech at a Basic Law seminar in Hong Kong, May 11, 2019. (PROVIDED TO CHINA DAILY)

HONG KONG - The key for the development of the Guangdong-Hong Kong-Macao Greater Bay Area is to respect the rule of law and uphold the “one country, two systems” principle, political heavyweights and legal experts said on Saturday.

They made the remarks when attending a seminar held in Hong Kong to commemorate the 29th anniversary of the promulgation of the special administrative region’s Basic Law.

Zhang Yong, vice-chairman of HKSAR’s Basic Law Committee under the Standing Committee of the National People’s Congress, said respecting the rule of law and the institutional differences among Bay Area cities is fundamental to the region’s development.

Given the differences in political, economic, and legal systems among Guangdong province, the Hong Kong and Macao SARs, it is inevitable for divergences, even conflicts, to occur in the development of the Bay Area, Zhang said.

Echoing with Zhang, Chen Dong, deputy director of the Liaison Office of the Central People's Government in the HKSAR, said the development of the Bay Area must be advanced under the “one country, two systems” principle and in strict compliance with the nation’s constitution and the Basic Law of HKSAR.

That is also in line with the development outline for Greater Bay Area unveiled by the central government on Feb 18.

Respecting the differences among various legal systems in the Bay Area could help give full play to the strength of each city, he said, adding that the rule of law is a shared principle in the Greater Bay Area.

The rule of law, a core value of Hong Kong society, serves as a cornerstone for Hong Kong’s stability and prosperity, Chen said.

Ensuring every dimension of governance is law-based is also one of the 14-point fundamental principles to guide the endeavors made by the Communist Party of China since the 19th National Congress in October 2017, Chen said.

Hong Kong’s Secretary for Constitutional and Mainland Affairs Patrick Nip Tak-kuen called for a “think out of the box” approach towards differences in the Bay Area.

The “one country, two systems” brings opportunities, rather than challenges to the development of the Bay Area, he said.

The seminar was held by the Joint Committee for the Promotion of the Basic Law of Hong Kong, and sponsored by Constitutional and Mainland Affairs Bureau’s Basic Law Promotion Research Sponsorship Scheme. The government holds various kinds of promotion activities, such as seminars, exhibitions, and quiz competitions, to enhance public understanding of the "one country, two systems" principle and the Basic Law.