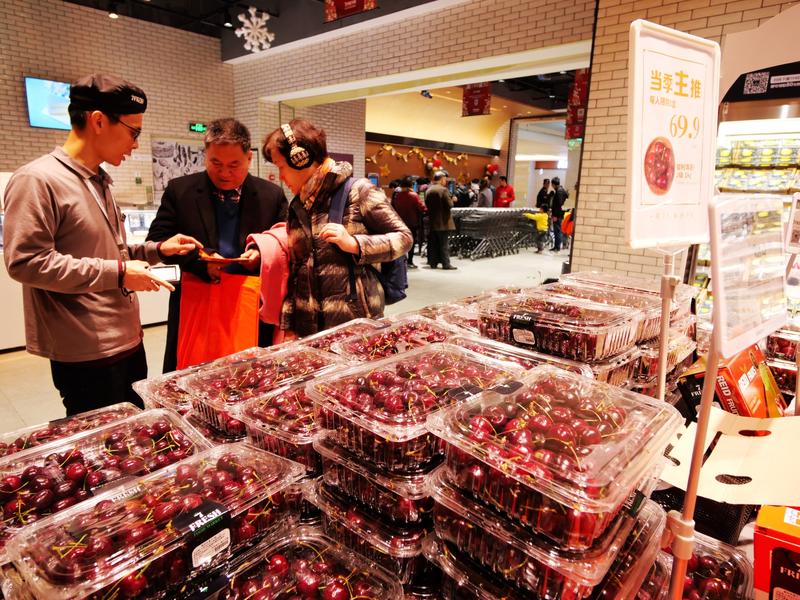 Thanks to Chinese people's growing demand for high-quality imported produce, Chilean cherries have become one of the most popular choices for treats and gifts associated with the annual Spring Festival.

Fueled by China's appetite for Chilean cherries, Chinese leading online-to-offline retailer Suning.com experienced a shopping spree during the Spring Festival. Sales of Chilean cherries via the platform reached 500 metric tons from Feb 4 to 10.

Cherry sales were also brisk on other retail platforms. Miss Fresh, an e-commerce startup that delivers fresh produce in 21 Chinese cities, said more than 4,000 tons of Chilean cherries had been sold via the platform between November and January.

Cherries from Chile not only have counter-seasonal advantages, but also fit the Chinese New Year culture with their red color, which denotes luck and fortune

During Miss Fresh's 2019 shopping festival in January in the lead up to Spring Festival, the sales volume of cherries from Chile expanded more than 30 times over the previous year, the company said.

Zhao said: "Chilean cherries are extremely popular for several reasons. First, with imports of the cherries increasing annually, their average price has dropped sharply compared with the previous years. Chinese consumers' growing purchasing power has also fueled the surge in buying cherries. Second, the red color, round form and the sweet taste satisfy local consumers' expectations for fresh fruit. Third, Chile is located in the southern hemisphere and its cherries are harvested during China's New Year season, which will help fill in for the lack of fresh fruit during the winter."

Cherries are one of Chile's main exports, and the crop will usually ripen from November to February, making it one of the popular selections for the Spring Festival shopping spree.

After signing a deal with Chile, China started importing cherries from Chile in 2008. Currently, Chile is the largest supplier of cherries to China, which is also its top customer for cherries, buying more than 85 percent of Chile's cherry exports.

Data from the Chilean Fruit Exporters Association showed that Chile exported more than 125,000 tons of cherries to China during the 2017-18 season.

Charif Christian Carvajal, marketing director for Europe and Asia at the Chilean Fruit Exporters Association, said while Chinese people are bundled up for winter weather, it's actually warm in Chile.

"Cherries from Chile not only have counter-seasonal advantages, but also fit the Chinese New Year culture with their red color, which denotes luck and fortune."