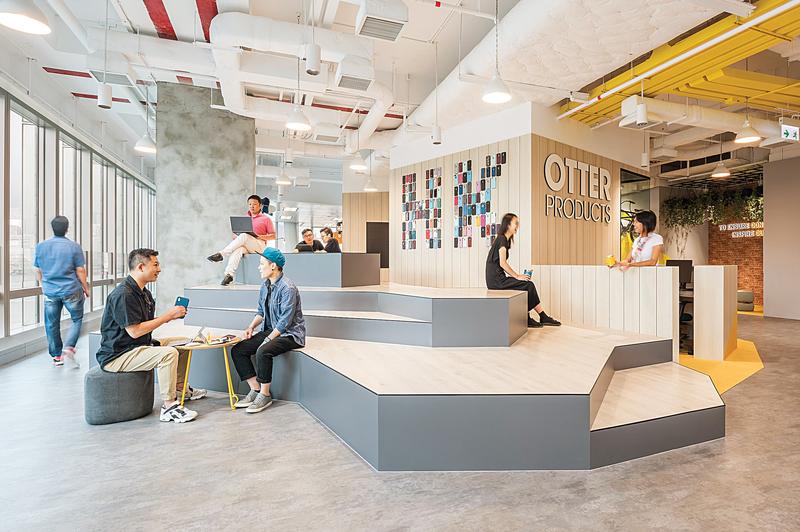 Prime location office addresses have long been seen as status symbols in Hong Kong, a city notorious for its sky-high property prices. From the mid-19th century up until the 1960s, it made sense to be close to the bounty loading on and off merchant ships. Central, where foreign companies set up shop en masse, quickly grew to become Hong Kong’s central business district, clustered with office and warehouse hybrids.

As Hong Kong evolved into a service-oriented city, demand for commercial office spaces skyrocketed not only in Central, but also neighboring areas such as Wan Chai, Causeway Bay and Western District. In the recent years a growing number of businesses are seeking to site their offices in less expensive areas as a result. Aside from being more cost-effective, by moving away from traditional business districts — which are often dominated by old buildings with rigid floor plans — companies are finding flexible new spaces that give them the opportunity to reinvent and rebrand.

At the end of July 2019, the Hong Kong office of London-headquartered law firm Eversheds relocated from The Landmark in Central to One Taikoo Place in Quarry Bay. With this move, the firm almost doubled its office space to 22,000 square feet  (2,044 square meters) while keeping its rent bill roughly the same. It capitalized on the blank slate of the recently completed Swire development to realize an open office concept with furniture by Swiss brand USM.

“We went from six to 140 people in the decade that we have been in Hong Kong,” reveals Stephen Kitts, Eversheds’ managing partner for Asia. “With its one percent vacancy rate and up to 25 percent rent increase, there were almost no suitable options for us in Central. We knew we were pushing the envelope with the move to One Taikoo Place. Law firms are risk-averse by nature. But this was manageable risk, as we can accommodate future growth in our new office.”

By moving from Central to Quarry Bay, Eversheds doubled their office space to 22,000 square feet (2,044 square meters) while managing to keep their rent bill roughly the same as before. (PHOTO PROVIDED TO CHINA DAILY)

Not everyone in the company was excited about the move away from Central at first, but Eversheds managed to allay concerns by creating a progressive yet humane space with the help of interior design firm Spatial Concept.

“Everyone was unsure about the open plan,” recalls Gary Lai, Spatial Concept’s founder and creative director. “We found that their biggest concerns were storage and privacy. We ended up showing 20 options that demonstrated how privacy could be achieved without building any walls.”

To address the privacy issues, Lai and his team created internal non-dedicated rooms of varying sizes for confidential calls and brainstorm sessions. Comfort was also addressed with a cafe, wellness room with bed and massage chair, and showers that allowed staff to rejuvenate. In the front of house, reception pods and flexible meeting spaces set against a panoramic harbor-view backdrop reflect the firm’s forward-thinking nature.

Lai believes that as infrastructure continues to improve with roads such as the Central-Wan Chai Bypass, more companies will start to look beyond what has traditionally been Hong Kong’s CBD. “New buildings give clients the opportunity to reimagine the professional office,” he states. “We cannot do this type of design in older buildings.”

In Eversheds’ Landmark office, the large building core and low ceilings — typical of buildings from the 1970s and 80s — made the space less adaptable to an open design. “We wanted to challenge how we work by adopting an open plan,” Kitts adds. “Now people will see each other more regularly.” 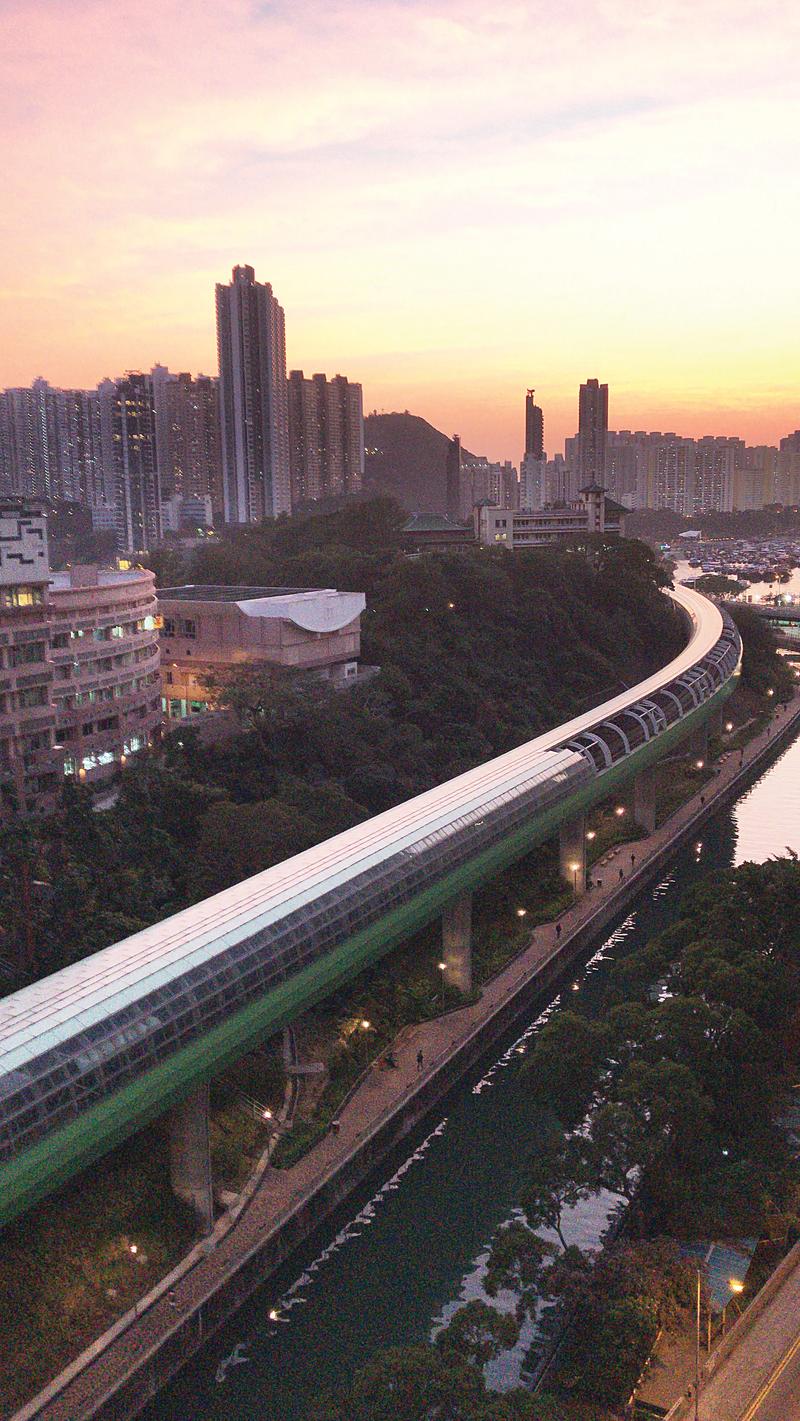 The opening of MTR South Island line has ratcheted up Wong Chuk Hang’s value as an alternative to the corporate hub in Central. (PHOTO PROVIDED TO CHINA DAILY)

For Otter Products, a move to Hung Hom was meant to better showcase the brand’s DNA. Specializing in protective products for smart phones and tablets, the Colorado-headquartered American company was founded two decades ago and has been operating in Hong Kong for seven years. The move from Wan Chai became necessary when the number of employees rose from five to 35.

“Our company is about collaborations,” explains Sean Murphy, Otter Products’ head of marketing for Asia-Pacific, who steered the move to Hung Hom. “Marketing, product design, operations and finance all work out of the Hong Kong office. Along with increasing the space for expansion of up to 85 people, we wanted to create a hub for the region.” The idea was to “diffuse” the frenetic atmosphere in the Wan Chai office in order to create  “a fun work environment” in the new  Hung Hom location.

After looking at options in Kowloon Bay, Tsuen Wan and Kwun Tong as well as other properties in Wan Chai, Otter Products found a building with high ceilings and expansive floor plates adjacent to the Hung Hom waterfront. The 270-degree view of Victoria Harbour was the icing on the cake. 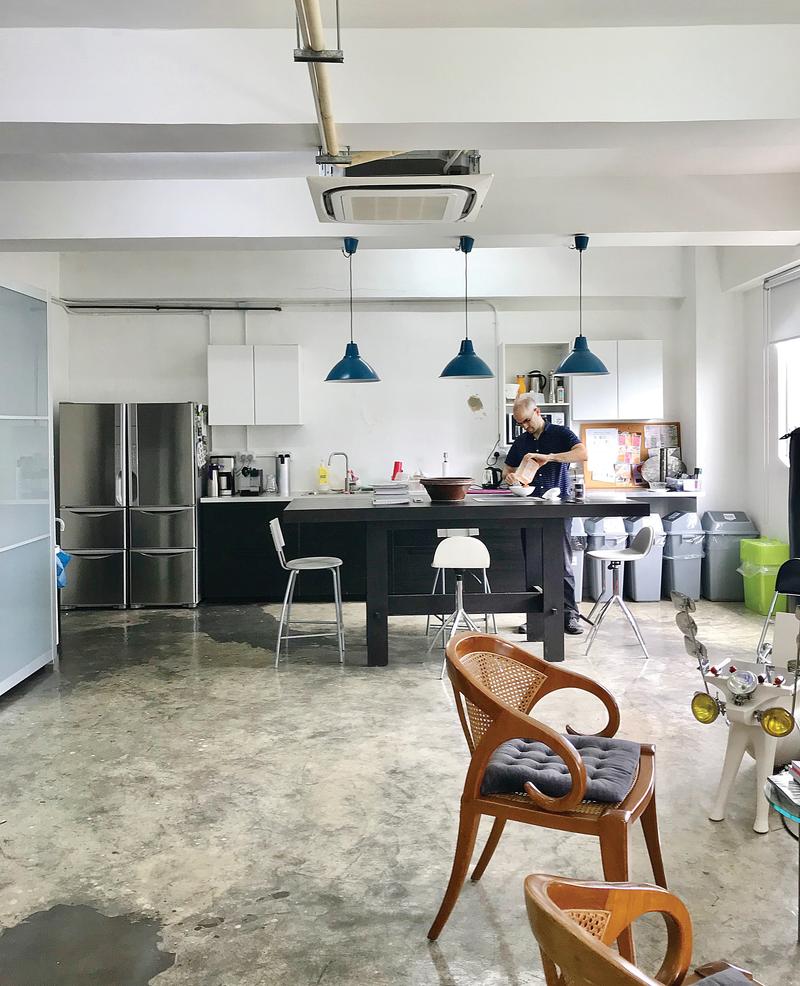 Also designed by Spatial Concepts, the new office boasts plenty of progressive features, including a colorful open lounge that functions as a reception area, lunchroom, cafe and meeting venue.

“Companies are looking for newer buildings which provide better architectural design and services,” explains Lai, adding that the full-length windows and raised floors give the office more open views and natural light. A mountain-shaped tier seating, inspired by the brand’s Colorado roots, was also made possible by the four-meter ceiling height — a rarity in Central.

“This space is better value per square meter than a traditional office,” Murphy states. “Previously, we had only one boardroom and it was sometimes empty. Now, we have three different enclosed meeting rooms and many open areas for casual discussions. People are talking to each other more.” 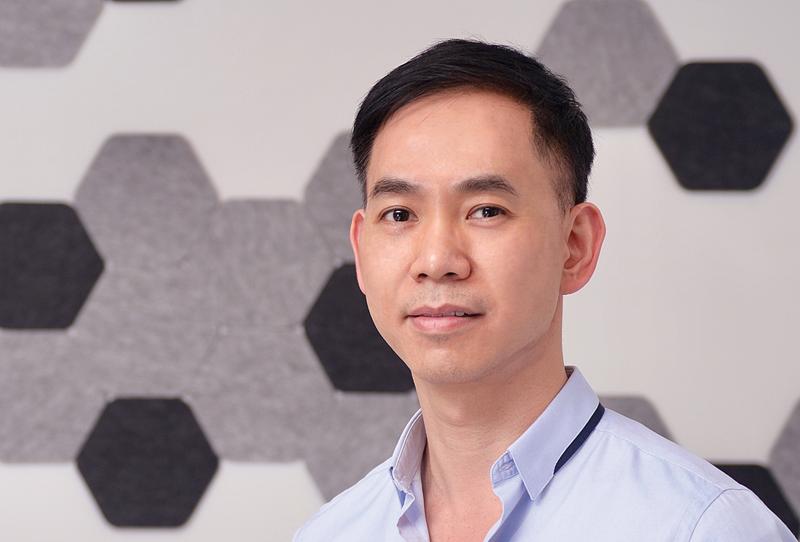 Infrastructural improvements, such as the opening of the MTR South Island line, made it possible for Buz Design to relocate to Wong Chuk Hang from Western District in late 2017. The hospitality design firm previously shared a 6,000-square-foot office with Handel Architects and St Legere Design International. In the decade prior to their move to Wong Chuk Hang, their businesses changed: Handel expanded while Buz contracted.

“We could have redistributed our premises,” admits J Lee Rofkind, principal and founder of Buz Design, who designed the company’s new premises with her officemates. “But our rent was going up. We looked at spaces in Chai Wan, North Point, Quarry Bay and Kwun Tong besides Wong Chuk Hang. All the principals lived on Hong Kong island side. When we saw our Wong Chuk Hang office space, we all said: this is it.”

For Rofkind, having a good workspace was more important than having an enviable address. “We tend to go to see our clients rather than the reverse,” she notes. “Designers need space to spread out materials. We now have a large pantry, giving staff more opportunities to mingle. Although the space is the same square footage as our previous one, it feels bigger. It’s a bright space with high ceilings and a funky, contemporary design.”

Rofkind admits that some of her staff resigned due to the longer commute. However, she herself finds the journey to work more pleasant after moving office to the south side. “It’s a nice 10-minute train ride above ground,” she says. “From the MTR, I walk past a temple along the way to the office.” The proliferation of art galleries and private kitchens adds to the neighborhood’s charms, Rofkind says.

As more companies reassess their priorities, many are finding that having an office on prime real estate is increasingly less important than having a space that fosters growth, innovation and work satisfaction. “Creative businesses are selling what people have in their heads,” says Kitts.

It is no longer about where you work, but how you work.