By Hou Liqiang in Madrid 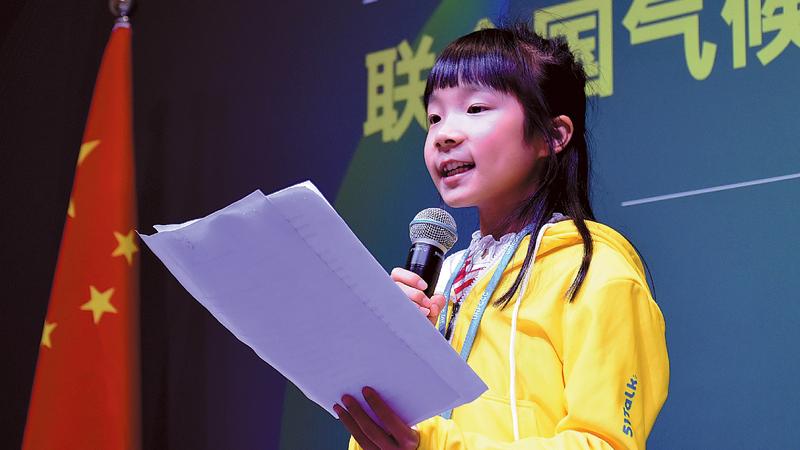 Li Zilin, 9, speaks at an event on the sidelines at the United Nations climate change conference in Madrid on Dec 5. (PHOTO PROVIDED TO CHINA DAILY)

Thousands of people of all ages filled the streets of Madrid early this month, marching amid the flashing blue and red lights of police cars, chanting slogans and holding placards or flags.

Some of the protesters in the Spanish capital sang and danced, accompanied by lively music.

Sitting on his father's shoulders, one small boy, who was among the youngest in the crowd, wore a white T-shirt with a slogan on the back stating, "Never too small to make a difference."

Different countries have different ways of expressing their concerns about the challenges of climate change. If we look at what’s happening in universities and also in the private sector (in China), there’s a lot going on

These scenes on Dec 6, during the United Nations climate change conference, were just one of the latest reminders of the push being made by NGOs worldwide for enhanced action on the issue.

Chinese delegates attending the conference, especially the younger ones, faced questions about what they had been doing at home to address global climate change.

The conference, also known as COP25 for the conference of the parties that signed the Paris climate agreement, had been scheduled to end on Friday. But heated discussions over differences delayed the closure until Sunday. The event was not only attended by diplomats from nearly 200 countries, but also by NGOs from across the globe.

Although they wore no special costumes, two 9-year-olds from China stood out amid the thousands at the bustling center. Chen Hetu, a boy, and Li Zilin, a girl just three months older than him, were among the youngest speakers on the event's sidelines.

On Dec 5, Li, who comes from Sichuan province, the major habitat of the giant panda, delivered a speech on climate change and animal protection.

She told her audience that in the next 80 years pandas may have to move to higher altitudes with lower temperatures in search of certain varieties of bamboo if global warming continues at the present rate. 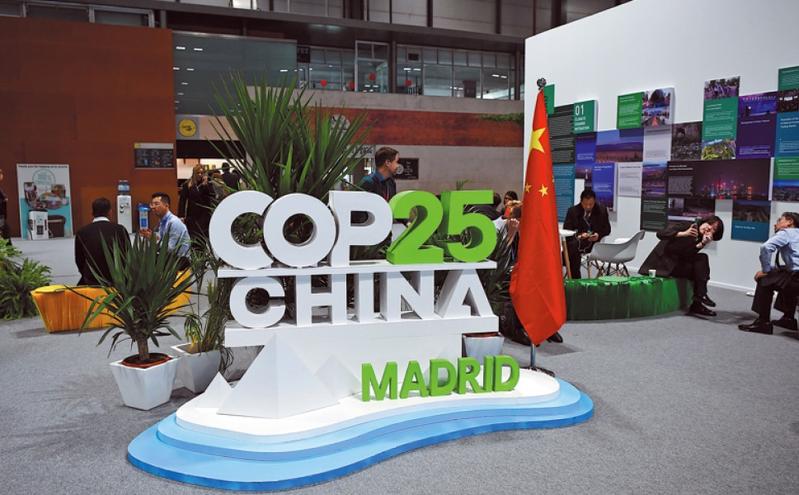 The two primary school students joined hundreds of NGO representatives from China for the 9,000-kilometer trip to Spain to attend the conference, a stark contrast to just seven more than 10 years ago.

Wang Xiangyi, deputy secretary-general of the China Association for NGO Cooperation who has observed the annual climate gathering for 12 years, said she thought representatives from Chinese NGOs first attended in 2007, when COP 13 was held in Bali, Indonesia.

She said just seven Chinese from the nongovernment sector were at the event, including only three from local NGOs. The others were a journalist and a college student, while the remaining two worked for branches of international NGOs in China.

Wang said their attendance attracted a lot of attention and they were interviewed by many journalists, some of whom said they did not know that Chinese NGOs were working on climate change issues.

"When Sha Zukang (former UN deputy secretary-general for economic and social affairs) saw us, he came to talk with us and asked to have a group photo taken," she said.

Wang added that since 2007, the development of climate-related NGOs in China has boomed. When her association launched the China Civil Climate Action Network that year, the latter only had about 10 local climate-related NGOs. Now, the number has risen to 33.

She said some Chinese NGOs are actively promoting projects that could help with climate change mitigation and adaptation, without knowing that these ventures are climate-related.

"There are many such cases," she said, citing the example of a local NGO in Yunnan province which thought its project to help farmers adapt to frequent droughts by promoting new crop species with fresh planting methods was solely an agricultural program. 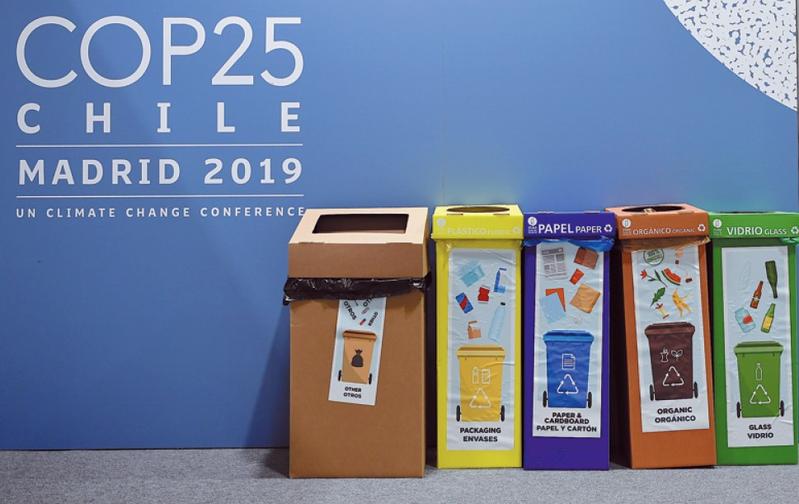 Trash bins at the conference were made from recycled paper. (LU YANG / XINHUA)

Chinese NGOs gained access to the UN climate change conference through their international counterparts, which held observer status for the event. Wang's association was granted such status in 2011, but there are only about 10 Chinese local NGOs that are observers, she said.

Among the representatives from Chinese NGOs this year, the younger generation stood out by taking part in a range of events on the sidelines. They not only delivered speeches, but also held news conferences and joined their foreign counterparts in joint declarations on climate action.

On Thursday, they, together with some international students, staged a fashion show, featuring costumes made from recycled materials to promote a low-carbon lifestyle.

Back home, instead of taking the approach adopted by Greta Thunberg, the teenage climate activist from Sweden, to motivate students to boycott classes in pursuit of enhanced action, young Chinese, motivated by local NGOs, are joining more "classes" with a climate-change theme.

For example, Wang Zekai, who launched the NGO Youthink Center in 2009, has been promoting online classes, hoping to "transform youth into low-carbon talent that not only thinks low-carbon is important, but will also take action and be capable of influencing people around them".

Students who complete the course receive e-certificates and are encouraged to share what they learn via social media to attract increased participation in the program from NGOs. 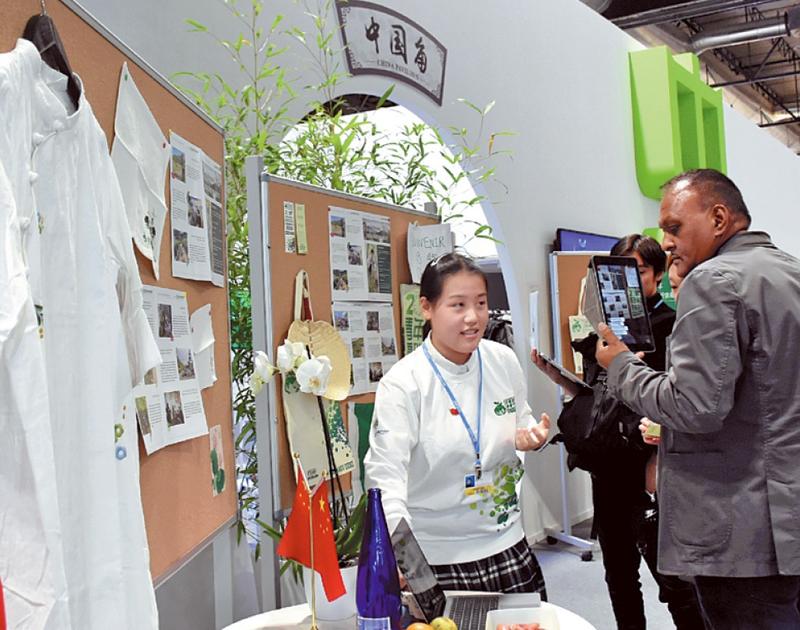 Visitors are presented with gifts at the Chinese pavilion in Madrid. (LU YANG / XINHUA)

In one of the latest online classes, for example, Youthink Center will share with young participants the journey made by a Syrian girl to attend this year's UN event in Madrid. She had to take a taxi from her war-torn homeland to Jordan before flying to Spain.

Participants in the program are also encouraged to make online pledges on living a low-carbon lifestyle.

"We offer them a series of choices. Some are as simple as taking public transportation. They can also make a promise to work in green industries after they graduate. With a range of interesting online activities and interaction, we want to mobilize the participation of young people," Wang Zekai said.

The project also includes a competition on climate action plans, with the winner qualifying for a sponsored trip to the UN climate change conference.

Wang Zekai said he expects the number of participants in the project to surpass 100,000 this year. There are plans to expand the project to other countries in the Asia-Pacific region by recruiting 200,000 volunteers to help mobilize 1 million young participants.

Meanwhile, the China Youth Climate Action Network has launched a two-year project named 2030 Climate Change +. Every year it will choose 20 teams from across the country. In addition to offering training, half the teams will be provided with financial support to conduct yearlong climate-related field research, according to the network.

The NGO will organize three cross-sector joint learning teams, who will publish at least 50 climate-themed papers written from the perspective of young people to help spread climate knowledge.

Zhang Haoran, 24, who works with the network, said, "Media exposure is a major part of the project to help promote it, with the aim of involving government, enterprises, the public and think tanks."

While motivating the teams that are chosen to contact government bodies and businesses in their field research, it is expected that the in-depth climate-themed articles published by these young people will further encourage stronger action, Zhang said.

The program has a target of getting at least 10 local governments to carry out "more ambitious actions" in their jurisdictions, according to the network.

The students do not usually have access to officials and may not know how to make their acquaintance. As part of the lectures, or closed-door seminars held in conjunction with them, they will learn how to communicate with officials, in addition to climate-related knowledge.

Zheng Xiaowen, 28, head of the China Youth Climate Action Network, said the NGO, which was established in 2007, has been organizing young Chinese to take part in UN climate change conferences since 2008. It hopes they can develop instructive ideas on what they can do in their home country by communicating with their counterparts from overseas.

Since 2007, the network has also been promoting energy conservation at universities. Previously, it mainly motivated students in leading low-carbon lifestyles or in calculating carbon emissions at their universities, Zheng said. 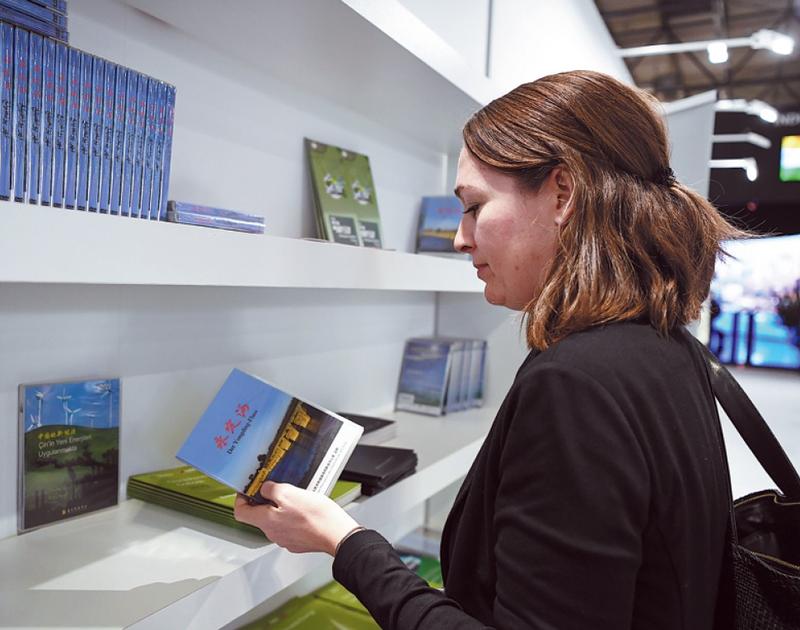 She added that more than 500 Chinese universities have taken part in activities organized or sponsored by her NGO, involving at least 100,000 young people.

The network plans to introduce a new strategy in promoting the campus project by persuading university executives to launch energy-conservation initiatives at management level.

She said that while Chinese NGOs could help promote the concept of climate change, they have yet to adequately play such a role and need to step up their efforts.

Li Xiajie, deputy director of the International Department at the China Association for NGO Cooperation, said Chinese NGOs urgently need to better explain the efforts they have made on climate change to people around the world.

They also need to increase their efforts to conduct work in a way that can be clearly understood and accepted by the international community.

Joel Naoki Ernesto Christoph, a French student who has been studying at Tsinghua University for four months, said Chinese society is now speaking out more on climate change.

"Different countries have different ways of expressing their concerns about the challenges of climate change. If we look at what's happening in universities and also in the private sector (in China), there's a lot going on," he said.