Trump sees 'decent chance' of denuclearization ahead of summit 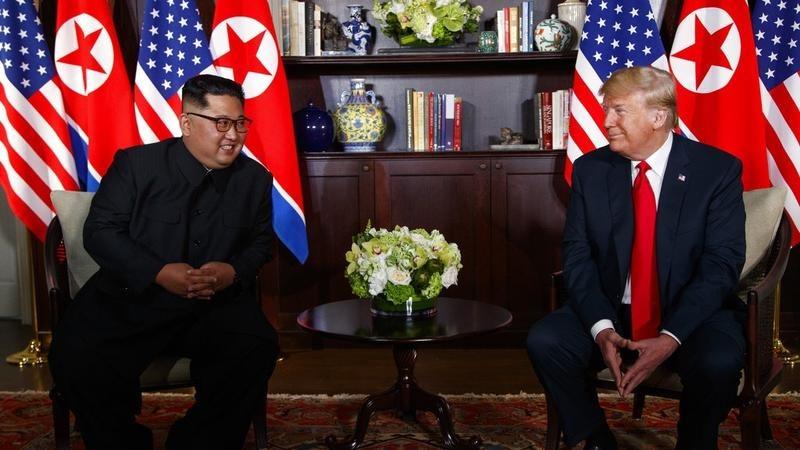 In this June 12, 2018 photo, US President Donald Trump, right, meets with leader of the Democratic People’s Republic of Korea (DPRK) Kim Jong-un at the Capella Hotel on Sentosa Island in Singapore. (EVAN VUCCI / AP)

WASHINGTON - US President Donald Trump said on Wednesday that progress is "being made" in negotiations with Pyongyang and he saw a "decent chance" of denuclearization on the Korean Peninsula.

"North Korea relationship is best it has ever been with US ... Decent chance of Denuclearization," Trump tweeted.

"North Korea relationship is best it has ever been with US ... Decent chance of Denuclearization," Trump tweeted

The Democratic People’s Republic of Korea is also referred to as North Korea.

Washington and Pyongyang have regained momentum in their talks on denuclearization as the White House announced over a week ago that the second summit between Trump and Kim Jong-un, top leader of the DPRK, "will take place near the end of February."

"I look forward to seeing Kim Jong Un shortly. Progress being made-big difference!" The US president wrote in a separate tweet.

US Secretary of State Mike Pompeo said on Wednesday that the meeting will be held somewhere in Asia.

"We'll do it someplace in Asia," he said during an interview with Fox News Channel.

The top US diplomat added that he was "dispatching a team" which is "headed that way now to lay the foundations for ... a substantial additional step towards the path for not only denuclearization of the peninsula, but a brighter future for the North Korean people and security on the peninsula."

We'll do it someplace in Asia

"I am dispatching a team there. They're headed that way now to lay the foundations for what I hope will be a substantial additional step towards the path for not only denuclearization of the peninsula but a brighter future for the North Korean people," Pompeo said.

Pompeo did not name the summit venue. Vietnam said last week it had not been informed about any time or venue for a possible Trump-Kim summit, but that it was confident in its ability to host such a meeting.

Officials and diplomats said two weeks ago that Vietnam was keen to host the summit and two sources told Reuters that Hanoi was preparing to receive Kim on a state visit.

Singapore, where Trump and Kim met in June, and Bangkok have also been talked about as possibilities for the planned summit.

"We currently assess that North Korea will seek to retain its Weapons of Mass destruction (WMD) capabilities and is unlikely to completely give up its nuclear weapons," said Director of National Intelligence Dan Coats in a congressional testimony on Tuesday.

The meeting between Trump and Kim, if held as scheduled, will be the two leaders' second face-to-face encounter following their landmark summit in Singapore last June. Both sides have said they look forward to such a meeting.

During his Jan 7-10 trip to China, his fourth visit to China in less than a year, Kim said that Pyongyang will make efforts for the second summit between DPRK and US leaders to achieve results that will be welcomed by the international community. The DPRK leader also thanked China for its related efforts.