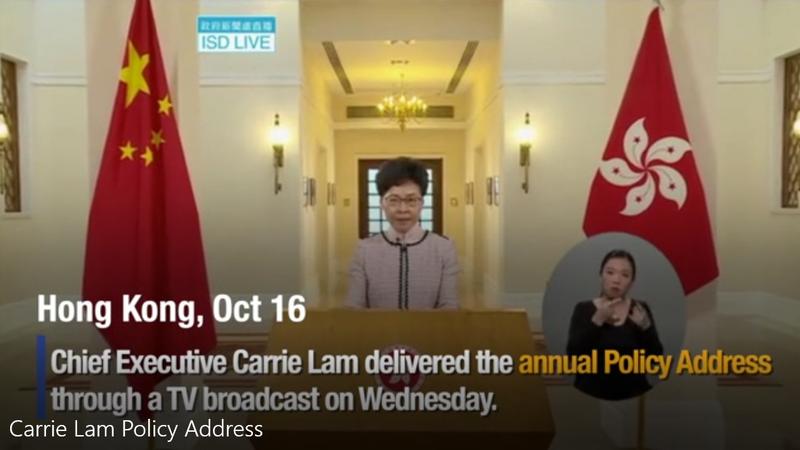 HONG KONG - Hong Kong Chief Executive Carrie Lam Cheng Yuet-ngor began her highly anticipated third Policy Address via video at 12.15 pm on Wednesday after she was prevented from speaking shortly after 11 am as scheduled as she was repeatedly heckled inside and outside the Legislative Council (LegCo) chamber.

Shortly before 11:30 am, LegCo President Andrew Leung adjourned the meeting as Lam left the chamber. The LegCo meeting was suspended within minutes of convening at 11 am after three pan-democrats were ordered to leave the chamber.

Regretting the circumstances that prevented her from speaking at the LegCo, Lam began her speech by urging calm in Hong Kong and with an appeal to creating an environment of mutual respect and trust in the city.

Noting that 220 policy initiatives had been taken by her government to improve the lot of people, she acknowledged housing remained the most serious issue that her government must tackle. The highlights for her speech included reducing waiting times for public housing access, making it easier for first-time buyers to get mortgages on properties and increasing land supply through compulsory purchases and land reclamation. 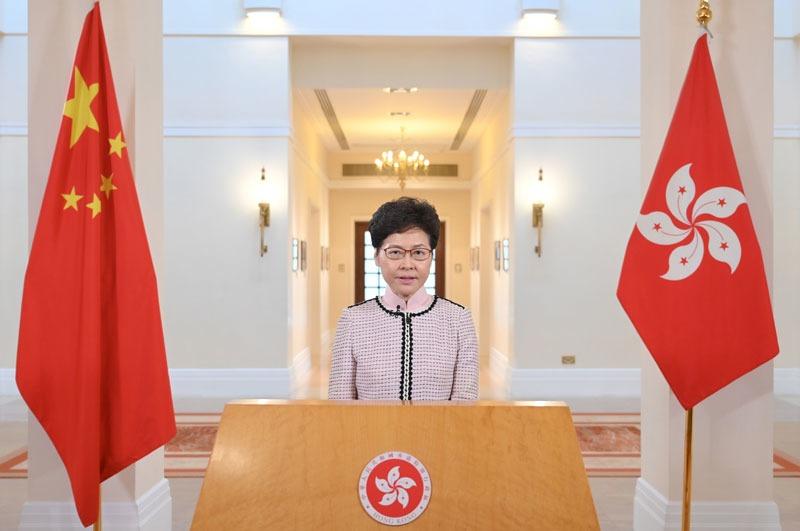 The CE said she has set a clear objective that every Hong Kong citizen and his/her family will no longer have to be troubled by or pre-occupied with the housing problem, and that they will be able to have their own home in Hong Kong

This apart, the CE proposed starter homes (SH) targeted at Hong Kong residents who are young professionals and converted the private residential project of the Urban Renewal Authority (URA) at Ma Tau Wai Road into an SH Pilot Project for sale.

In a significant move, the government proposes to delink the selling prices of flats under the Home Ownership Scheme (HOS) from the market prices of private residential properties, and adopting the affordability of applicants as the basis while ensuring that at least 75% (up from 50%) of the number of HOS flats for sale are affordable.

"I hereby set a clear objective that every Hong Kong citizen and his family will no longer have to be troubled by or pre-occupied with the housing problem, and that they will be able to have their own home in Hong Kong, a city in which we all have a share," the CE said in her Policy Address.

Lam pledged to increase the number of transitional housing projects substantially to provide a total of 10,000 such units within the next three years and offering relief for low-income households not living in public rental housing (PRH) and not receiving Comprehensive Social Security Assistance (CSSA) (including people on the PRH waiting list) by providing a cash allowance.

In her speech, Lam aslo pledged to "increase the supply of land for housing development in a persistent manner".

"We will expedite our planning work and resume three types of private land wholly for public housing... and related infrastructure development by invoking the Lands Resumption Ordinance and other applicable ordinances," Lam said. 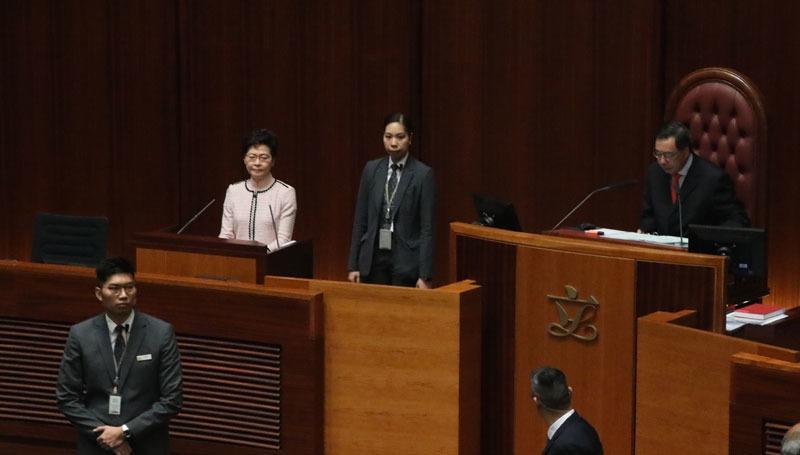 Hong Kong Chief Executive Carrie Lam Cheng Yuet-ngor waits in vain for opposition chaos to die down as she readies to present her Policy Address at the chamber of the Legislative Council in the morning of Oct 16, 2019. The meeting was eventually adjourned. (EDMOND TANG / CHINA DAILY)

Three types of land will be seized a) About 450 hectares of brownfield - abandoned farmland - near existing new towns or main roads, such as Ping Shan in Yuen Long and Lam Tei in Tuen Mun; b) land planned for public housing in existing zoning plans, with proposals stalled because of different reasons such as diverse ownership; c) three urban squatter villagers Ngau Chi Wan, Cha Kwo Ling and Chuk Yuen United Village, totalling 7 hectares.

"Given the importance of public transport infrastructure to housing development," Lam said MTR Corporation Limited will be invited to start detailed planning and design for the Tung Chung Line Extension, Tuen Mun South Extension and Northern Link in the coming year.

In her speech, Lam said recurrent spending on welfare and health care increased by 29 percent in the past two years, amounting to HK$164.9 billion in the 2019–20 estimates.

According to the CE, service places for On-site Pre-school Rehabilitation Services will be increased by 1,000 each year over the next three school years to bring the total number to 10,000 as pledged before.

Also, the government plans to widen its after-school care program with a host of new measures, including adding 2,500 full fee-waiving places. Lam said the pro-child policies are expected to benefit more than 5,700 students and their families.

The support under the Public Transport Fare Subsidy will raised from one-fourth to one-third of the monthly public transport expenses in excess of HK$400, as well as raising the subsidy cap from the existing level of HK$300 to HK$400 per month.

Fees on government-owned tunnels will also be waived to ease the public's transport cost burden and the cover of government subsidies will be widened to include eight outlying island ferry routes in addition to the current six. 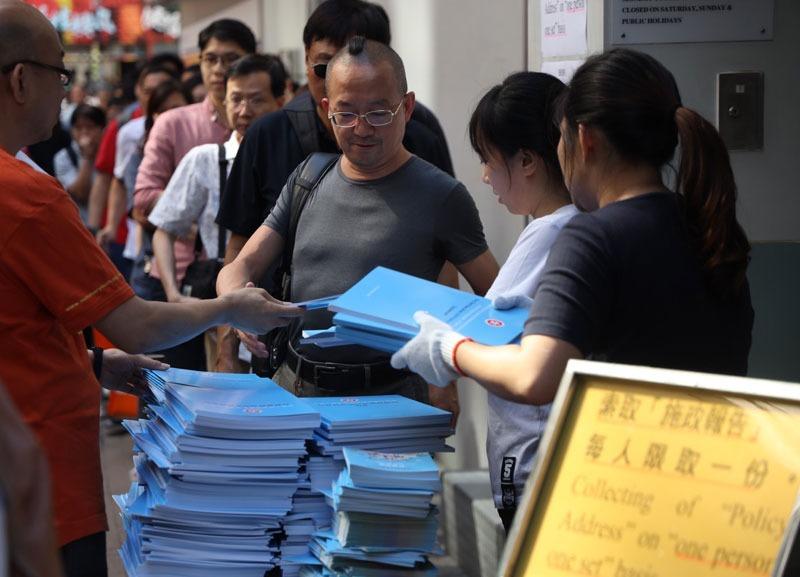 Noting that small and medium enterprises needed particular attention, Lam said that despite turbulence the number of startups in Hong Kong grew by 42.8 percent to 3,184 between 2017 and 2019.

We have to put aside differences and stop attacking each other, so that we could set sail again based on the values upheld by all

"...the Government capitalises on the opportunities brought by the Belt and Road (B&R) Initiative and the development of the Guangdong-Hong Kong-Macao Greater Bay Area, with the aim of creating new growth areas," Lam said in her speech.

She said her government is working on tax concessions for HK enterprises wishing to shift from exports to domestic sales with a view to enhancing their competitiveness in the mainland domestic market.

Lam's administration has struggled for months to resolve escalating protests sparked by a since-withdrawn extradition bill. The violence intensified in October after Lam invoked a rarely used emergency law to ban protesters from wearing masks.

Hong Kong's economy contracted in the second quarter and is widely expected to have fallen into a technical recession as soon as the third. The US-China trade tension has impacted exports while protests have scared away visitors from the city's shopping malls, restaurants and luxury hotels.

Financial Secretary Paul Chan presented a US$2.4 billion stimulus package in August to help bolster the economy. He's also called on property owners and developers to offer rent relief to struggling retailers. About 100 restaurants have shut down because of the unrest, affecting about 2,000 employees, he said in a Chinese-language blog post on Sunday.

In closing her speech, Lam stressed the importance of reconciliation as she said, "We have to put aside differences and stop attacking each other, so that we could set sail again based on the values upheld by all."