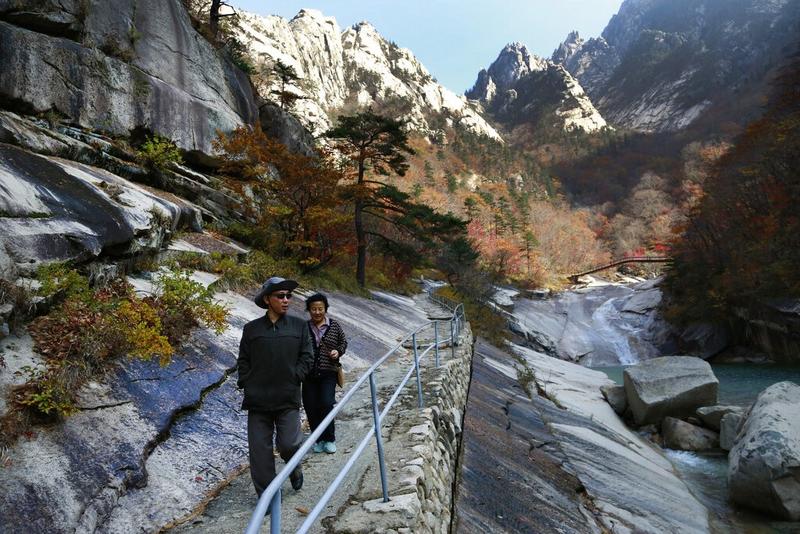 In this Oct 23, 2018, file photo, local tourists walk on the trail at Mount Kumgang, known as Diamond Mountain, in the Democratic People's Republic of Korea. (DITA ALANGKARA / AP)

Deputy Spokesman of Seoul's unification ministry Kim Eun-han told a press briefing that ROK maintained a position that the Mount Kumgang tour issues should be tackled based on a mutual agreement between the two Koreas.

The DPRK sent an ultimatum to ROK on Nov 11, in which Pyongyang said it would be the last warning and the removal of ROK-built facilities in Mount Kumgang should be discussed through the exchange of letters, the deputy spokesman said.

Kim noted that ROK took it gravely, urging the DPRK to positively respond to Seoul's offer for working-level talks to discuss the Mount Kumgang issues.

Seoul proposed holding working-level talks with Pyongyang about the Mount Kumgang tour issues, but the DPRK said it preferred the exchange of letters, rather than face-to-face talks.

The tour by ROK to Mount Kumgang, launched in 1998, has been suspended since a ROK female tourist was shot dead in 2008 by a DPRK soldier after allegedly venturing into off-limit areas.

Top DPRK leader Kim Jong-un said last month that he would welcome the ROK compatriots at any time if they want to come to Mount Kumgang.

Kim has ordered the removal of ROK-built "shabby" facilities in Mount Kumgang in an agreement with the relevant unit of the ROK side.

The DPRK's Korean Central News Agency (KCNA) said earlier in the day that Pyongyang sent an ultimatum to warn that if the ROK authorities persist in its useless assertion, it will take it as an abandonment of the removal and take a resolute measure to unilaterally tear down the ROK-built facilities.