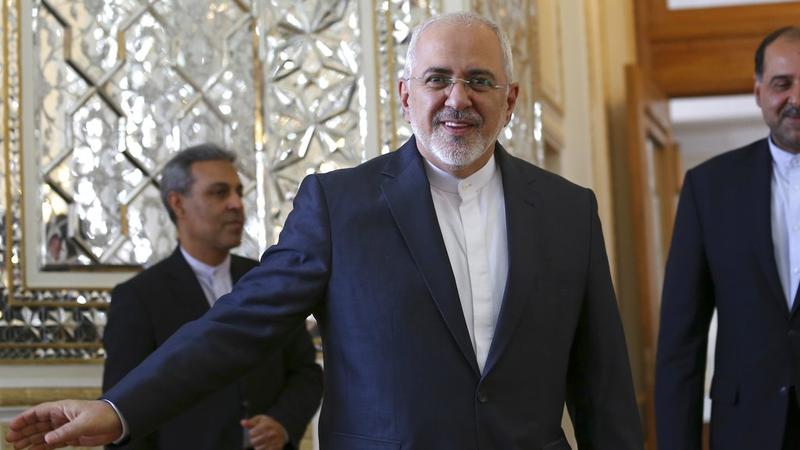 As Syria has a strong alliance with Iran and Russia, its relations with Turkey had dramatically worsened during the Syrian war as Turkey has been a major backer of the rebels in their insurgency against the rule of Assad

Upon arriving at the airport, Zarif said the militants of the Levant Liberation Committee (LLC), or the al-Qaida-linked Nusra Front, must be "cleaned out" of Idlib in northwestern Syria, the last major rebel bastion in Syria.

His visit came before the presidents of Turkey, Iran, and Russia are to meet in Iran on Friday to discuss the situation in Syria's Idlib.

On Aug 29, Zarif visited Turkey and met with officials including President Recep Tayyip Erdogan in reported talks on Idlib.

In a meeting during his visit last month, Iran's Defence Minister Amir Hatami and his Syrian counterpart signed a deal for military cooperation, while the United States, France and Britain issued a statement claiming Syria was planning a chemical attack in Idlib and warned that they would use force in case of such attack.

The Western statement was condemned by Syria, Iran, and Russia, who believe it is an attempt to prevent the Syrian army from capturing Idlib.

ALSO READ: Iran: Militants must be 'cleaned out' of Syria's Idlib

Turkey has 12 observation posts run by its military in Idlib to monitor the "de-escalation zone" agreed upon by Turkey, Russia, and Iran.

The Syrian army, backed by both Iran and Russia, has been amassing forces to launch a wide-scale campaign to eradicate the ultra-radical groups in Idlib while at the same time trying to reach reconciliation deals in that area.

Turkey's role is essential as Ankara has a considerable sway over the rebels in Idlib. It was assigned to monitor the truce between the Syrian government and the opposition.

But after failing to convince the LLC to dissolve itself, Turkey has recently declared the rebel group as a "terror organization."

Zarif said the tripartite summit on Friday will discuss ways to confront the extremist groups, mainly the LLC, amid efforts to separate this group from other less-radical militants who could achieve reconciliation with the government without military operation.

The meeting will also discuss how to coordinate on continuing the political process and the counter-terrorism in Syria, he added.

"After the victory against the extremist groups in Syria, it's about time to rebuild this country. Syria's alliances are contributing to this matter," Zarif said.

Hatami also said recently that Syria has entered the phase of reconstruction as the war was nearing an end.

"Russia, Iran, and Turkey are the guarantor countries to the Astana process. We are sure that the main goal of this summit will be the case of liberating Idlib and this is what the Syrian people are looking for," Syria's Foreign Minister Walid al-Moallem told Russia Today in an interview.

The three countries have backed the Astana process for Syria and agreed to establish four de-escalation zones including Idlib.

The Astana peace talks were launched in January 2017 with the aim of putting an end to violence and improving the humanitarian situation in the war-torn Syria.

But the situation in Idlib has escalated with the presence of ultra-radical groups such as the LLC, which also prevents other rebel factions from accepting a reconciliation deal with the Syrian government.

The government prioritized reconciliation in Idlib but was rejected by the ultra-radical groups who opted for a military operation.

The visit of Zarif to Syria was read by analysts as aiming to put the Syrian government in the picture of what had been discussed in Ankara.

Zarif also met with Syrian President Bashar al-Assad, during which both sides agreed that the pressure from the Western powers on Syria and Iran will not prevent both countries from protecting the interests of their people.

As Syria has a strong alliance with Iran and Russia, its relations with Turkey had dramatically worsened during the Syrian war as Turkey has been a major backer of the rebels in their insurgency against the rule of Assad.

But Turkey started considering its alliance with Iran and Russia as significant, particularly after the recent deterioration in the relations between Turkey and the United States, which imposed sanctions on Ankara over disputes regarding a jailed U.S. pastor in Turkey.

Meanwhile, Syria's Prime Minister Imad Khamis said during his meeting with Zarif that Damascus will continue to cooperate with friendly countries to reconstruct Syria, especially "Iran and Russia and the private sectors in these countries."

Khamis also welcomed the participation of the Iranian companies in the upcoming Damascus International Fair.