Children look at candles lit up at the Peace Park in Nagasaki, Aug 8, 2019, a day before the 74th anniversary of the US atomic bombing of the southwestern Japan city. (KYODO NEWS / AP)

NAGASAKI — Japan's city of Nagasaki on Friday marked the 74th anniversary of the atomic bombing in World War II, with Nagasaki mayor calling for the Japanese government's efforts in upholding the spirit of "never resort to war" during the memorial ceremony.

About 5,200 people and representatives from around 70 countries and regions attended the annual memorial ceremony held at the Peace Park. 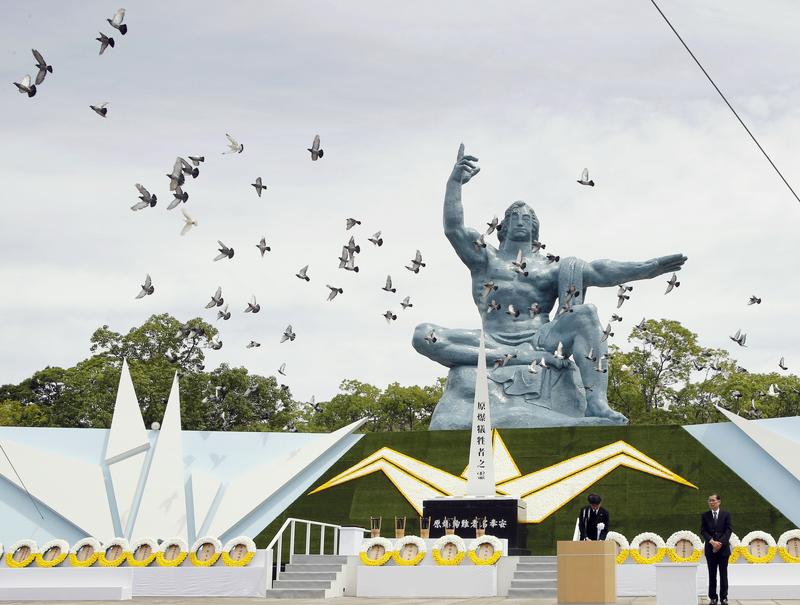 Doves fly over the Statue of Peace during a ceremony at Nagasaki Peace Park in Nagasaki, southern Japan, Aug 9, 2019 to mark the 74th anniversary of the world's second atomic bomb attack. (KYODO NEWS / AP)

As the only country in the world to have experienced the devastation caused by nuclear weapons, Japan must sign and ratify the Treaty on the Prohibition of Nuclear Weapons as soon as possible

Tomihisa Taue, the city's mayor, called on the government to adhere to the spirit of "never resort to war" and spread the spirit around the world.

"Above all, I ask the Japanese government to uphold the spirit of 'never resort to war' enshrined in the Japanese Constitution and to take the lead in disseminating that spirit around the world," Taue said.

He also urged the central government to immediately sign a UN treaty banning nuclear weapons, the third time he conveyed the same message in three years.

"As the only country in the world to have experienced the devastation caused by nuclear weapons, Japan must sign and ratify the Treaty on the Prohibition of Nuclear Weapons as soon as possible," Taue said in the Nagasaki Peace Declaration.

"As the only country to have experienced nuclear devastation in war, Japan will tirelessly continue its efforts to achieve a world free of nuclear weapons," he said, adding that "this mission remains unchanged even in the Reiwa era."

This photo taken on Aug 8, 2019 shows lanterns being offered for peace during a "Peace Lantern" event one day before the 74th anniversary of the atomic bombing, at the Peace Park in Nagasaki. (JIJI PRESS / AFP)

A message from UN Secretary General Antonio Guterres was conveyed in the ceremony. "The only true guarantee against the use of nuclear weapons is their total elimination," he said.

Nagasaki was hit by an atomic bomb on Aug 9, 1945, which prompted Japan's surrender and the end of World War II, making it the second city to have endured atomic bombing after Japan's Hiroshima was hit on Aug. 6 the same year. 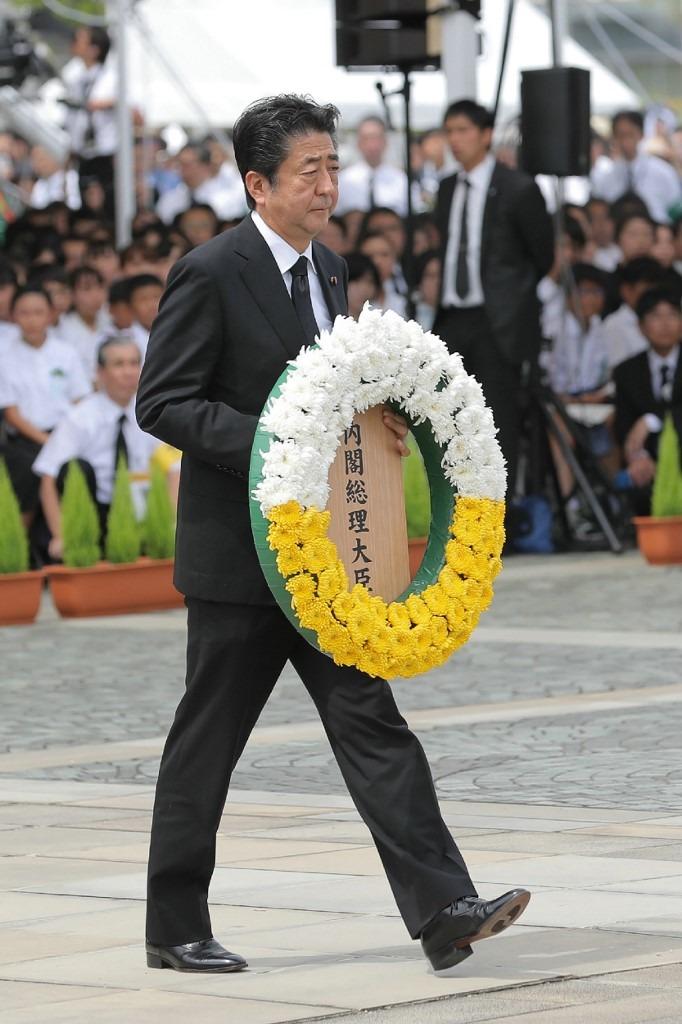 Japan's Prime Minister Shinzo Abe carries an wreath to offer for the victims during a memorial service to mark the 74th anniversary of the atomic bombing at the Peace Memorial Park in Nagasaki on Aug 9, 2019. (JIJI PRESS / AFP)

While Japan inwardly looks at the tragedies it had experienced at the end of World War II, historians and political minds of the international community have encouraged Japan to come to see themselves not as merely victims of the atomic bombings but also as the perpetrators who led to these tragic incidents to happen in the first place.

Japan brutally occupied many parts of Asia before and during World War II, causing untold suffering and deaths to hundreds of thousands of innocent victims.