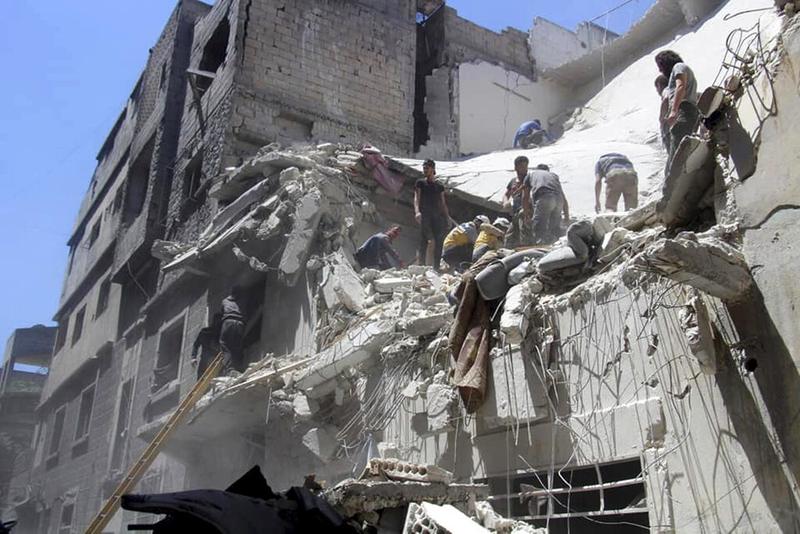 This photo provided by the Syrian Civil Defense White Helmets, which has been authenticated based on its contents and other AP reporting, shows Civil Defense workers inspecting a damaged building after an airstrike by Syrian government forces, in the town of Ariha, in the northwestern province of Idlib, Syria, May 27, 2019. (PHOTO / AP)

Assistant Secretary-General Ursula Mueller told the Security Council that humanitarian operations in many areas where there are active hostilities have been suspended, explaining that many of the UN's humanitarian partners have been displaced.

Assistant Secretary-General Ursula Mueller told the Security Council that humanitarian operations in many areas where there are active hostilities have been suspended, explaining that many of the UN's humanitarian partners have been displaced

This means the suspension of health, nutrition and protection services previously supporting some 600,000 people, including 21 immunization centers that have ceased operations, Mueller said. It also includes at least 49 health facilities that have suspended or partially suspended activities for security reasons, she said.

So far this month, she said, heavy shelling and aerial bombing has resulted in more than 160 civilian deaths and the displacement of some 270,000 people.

Fighting has raged in Idlib and surrounding areas since April 30 when Syrian troops began pushing into the enclave from the south while unleashing a wave of intense bombing over the overcrowded area. For President Bashar Assad, Idlib is the last stronghold to conquer before he can declare final victory against armed government opposition groups after eight years of civil war.

Mueller said the humanitarian community responded in May by handing out 170,000 ready-to-eat meals to those fleeing violence, but she said that "the response is stretched" and "further military operations will overwhelm all ability to respond."

At the Security Council meeting, Syria and close ally Russia clashed with Western nations over the impact of the offensive.

Russian Deputy Foreign Minister Sergei Vershinin said Moscow shared concern about the situation in and around Idlib, where he said the influence from radicals from the al-Qaida-linked Hayat Tahrir al-Sham, or HTS, had risen from 60% in November to 99% today in the region's de-escalation zone.

"People are dying at the hands of terrorists," he said. "Attacks are continuing with the use of multiple rocket launchers and combat drones against Russian military facilities. The fighters from HTS are terrorizing civilians and they're using civilian infrastructure for military ends and also using civilians as human shields."

Vershinin said the Russia air force is supporting Syrian government forces "to force terrorists" from areas used to bombard their bases and positions, "and to undermine the terrorist activities in the south of the Idlib zone of de-escalation."

Belgium's UN ambassador, Marc Pecsteen de Buytswerve, whose country is in charge of Syrian humanitarian resolutions and council statements along with Germany and Kuwait, said the three countries had several requests.

They include urging all parties to abide by their obligations under international humanitarian law to protect civilians, to recommit to September cease-fire arrangements and to provide unimpeded access for humanitarian aid. 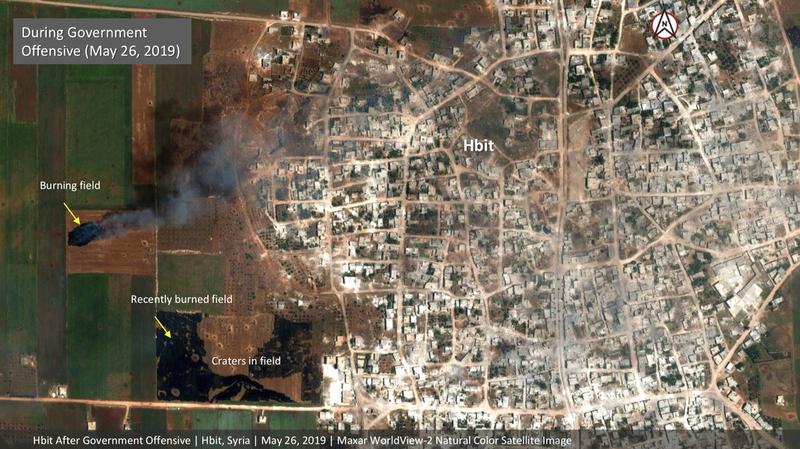 This satellite image provided by Maxar Technologies on May 28, 2019 shows significant damage to Hbit, Syria on May 26 as a result of a government offensive against the last rebel stronghold in the country. (PHOTO / AP)

Pecsteen de Buytswerve said Idlib is experiencing "indiscriminate and relentless aerial bombardment and shelling including the use of barrel bombs," stressing that "this use of force is incredibly cruel and completely unacceptable."

Vershinin said he understood that those questions can be asked of the Syrian government and opposition, but he said HTS controls virtually all of Idlib. "Can we ever say that terrorists are obliged to do something under international humanitarian law?" he added.

He said he had another question: "What must the Security Council do so that millions of people that we're talking about today in Idlib are no longer the hostages of terrorists?"

British Ambassador Karen Pierce responded: "There are more babies in Idlib than there are HTS fighters."

Russia and Syria say they want to protect the 3 million civilians in Idlib, she said, "but massive aerial bombardment of civilian areas, bombing of hospitals, schools and civilian infrastructure is not necessary and it's certainly not proportionate."

Pierce said the critical element in international humanitarian law is that there must be a distinction between military and civilian targets "and there needs to be proportionality — and that's what we're not seeing ... and that's why this council is so worried about this."

Syrian Ambassador Bashar Ja'afari said what Syria is doing is exactly what France, Britain, the US and others have done "to confront terrorist attacks."

"We will liberate every part of the Syrian Arab Republic," he said. "We will rid it of any illegal foreign presence. This is a sovereign right in accordance with the principles of international law (and) the provisions of the (UN) Charter."