Protesters stage a sit-in at the departure hall of Terminal 1 of Hong Kong International Airport on Aug 12, 2019. (PHOTO / CHINA DAILY)

HONG KONG - Hong Kong airport authorities canceled remaining flights on Monday after protesters swarmed the main terminal building for a fourth day, the biggest disruption yet to the city’s economy since demonstrations began in early June.

According to a statement issued by Hong Kong International Airport

“Airport operations at Hong Kong International Airport have been seriously disrupted as a result of the public assembly at the airport today,” the airport said in a statement. “All check-in service for departure flights has been suspended. Other than the departure flights that have completed the check-in process and the arrival flights that are already heading to Hong Kong, all other flights have been canceled for the rest of today.”
The Airport Authority said it had opened an emergency management center at the airport and was keeping in close touch with carriers so as to try to resume operations as soon as possible.

Traffic on roads to the airport was very congested and car park spaces were full, the authority said. Four Airport Express buses changed routes and one bus station in the airport has been closed, local traffic authorities said.

Thousands of black-clad protesters on Monday packed the arrival area, where they had gathered for a three-day sit-in that was originally planned to end last night. Shares of Cathay Pacific Airways Ltd., Hong Kong’s main airline, tumbled to a 10-year low after the news.

The social unrest has hurt the economy and impacted daily life in the global financial hub.

Violent scenes emerged over the weekend as protesters used flash mobs across the city, surrounding police stations, disrupting traffic, and hurling projectiles, including bricks and petrol bombs. One officer was taken to the hospital after suffering burns in the shopping district of Tsim Sha Tsui. Mob violence broke out elsewhere.

ALSO READ: Govt outraged by violence over the weekend

Cathay Pacific has come under fire after some of its employees joined the demonstrations. China’s civil aviation authority had earlier told Cathay Pacific to ban all employees who supported or joined the recent protests from flying to the mainland.

Cathay suspended a pilot from flying who had been detained while participating in a protest, the airline said in a statement. It also fired two workers for “misconduct.” They allegedly leaked information about the travel arrangements of a Hong Kong police soccer team, the South China Morning Post reported.

“As always our actions and responsibilities are focused on the safety and security of our operations,” the airline said in a statement.

“It’s affected business tremendously - all businesses basically,” Allan Zeman, chairman of Hong Kong’s Lan Kwai Fong Group, which operates restaurants and bars in the city, told Bloomberg Television. “We have to stop the violence. That’s the most important thing. Then we can talk.” 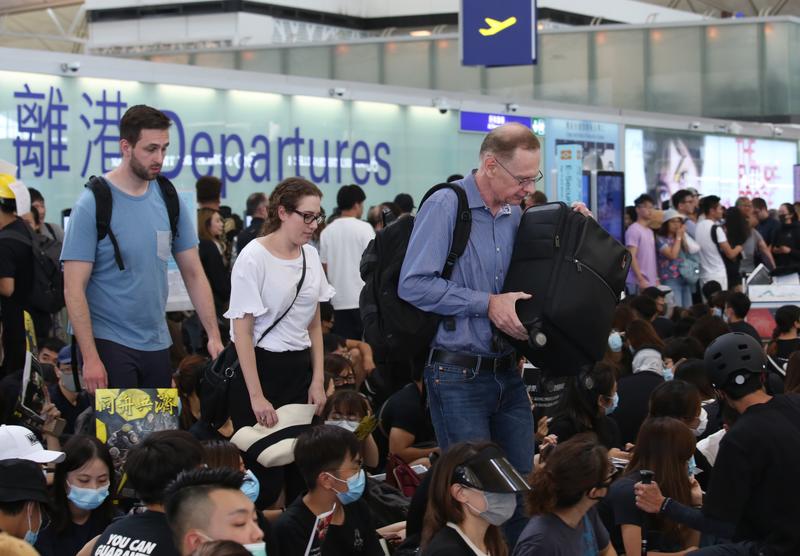 Travelers laden with luggage weave their way through a sea of protesters at the departure hall of Terminal 1 of Hong Kong International Airport on August 12, 2019. (PHOTO / CHINA DAILY) 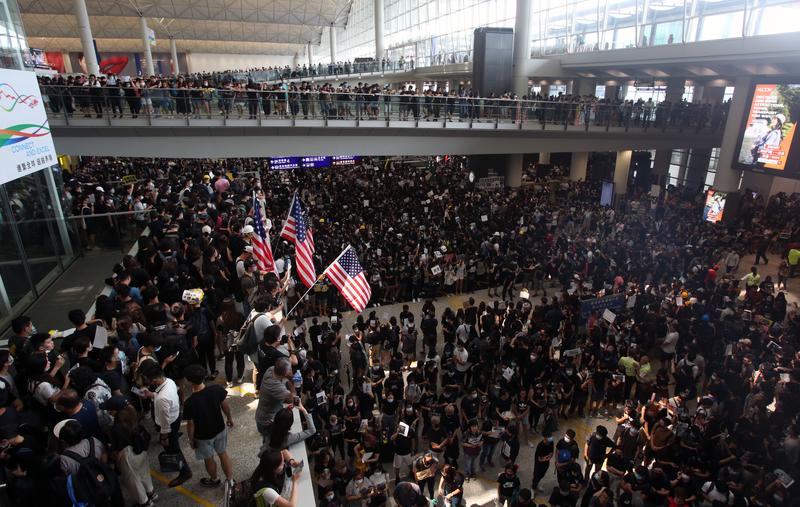