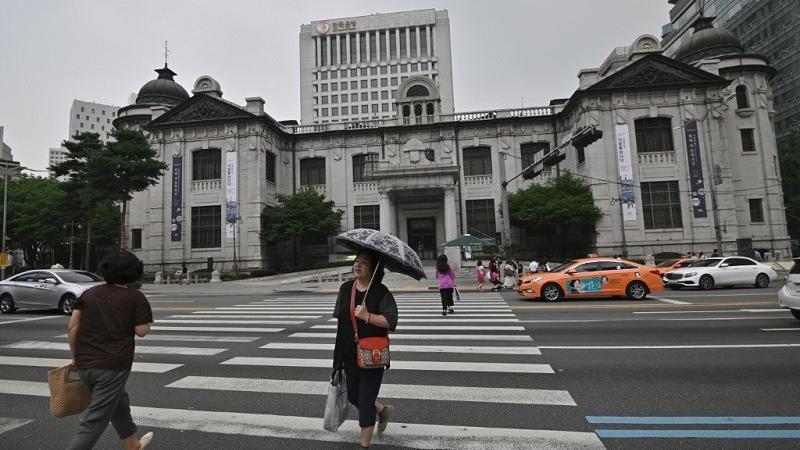 SEOUL - The Republic of Korea's (ROK's) central bank on Wednesday cut its policy rate to a record low amid growing concerns about external uncertainties, after lowering it by 25 basis points three months earlier.

Bank of Korea (BOK) Governor Lee Ju-yeol and six other policy board members decided to lower the benchmark 7-day repurchase rate from 1.50 percent to an all-time low of 1.25 percent.

The central bankers slashed the target rate by a quarter percentage point in July.

The rate cut was in line with market expectations. According to a Korea Financial Investment Association (KFIA) poll of 200 fixed-income experts, 65 percent predicted a more accommodative monetary policy.

Consumer price declined 0.4 percent in September from a year earlier, marking the first-ever fall since the statistical office began compiling the data in 1965

The BOK signaled a rate cut at the previous rate-setting meeting in August, when two of the seven monetary policy board members claimed a 25-basis-point rate cut.

The US Federal Reserve lowered its target rate from a range of 2.00-2.25 percent to 1.75-2.00 percent last month, leaving open a room for the BOK's more accommodative monetary policy.

Economic indicators painted a gloomy picture due mainly to external uncertainties such as the global trade dispute and the continued downturn in business cycle of the global semiconductor industry.

Export, which accounts for about half of the export-driven economy, kept falling for 10 straight months to September.

The International Monetary Fund (IMF) revised down its 2019 growth outlook for the ROK economy to 2.0 percent from 2.6 percent estimated six months earlier. The 2020 growth forecast was also slashed from 2.8 percent to 2.2 percent.

The Organization for Economic Cooperation and Development (OECD) downgraded this year's growth outlook for the ROK economy from 2.4 percent to 2.1 percent last month, while the BOK lowered its growth forecast from 2.5 percent to 2.2 percent in July.

Consumer price declined 0.4 percent in September from a year earlier, marking the first-ever fall since the statistical office began compiling the data in 1965.

The low inflation was mainly caused by supply-side factors, including lower prices for farm goods and oil products, but it reduced worry about the possible high inflation from the BOK's further rate cut.

Market watchers expected the BOK's further rate cut in the first half of next year if the external uncertainties last.

The BOK said in a statement that uncertainties over outlook for growth path got much bigger as the weakening of global trade maintained an economic slowdown.

The central bank noted that it would decide whether to adjust the accommodative monetary policy, after monitoring the effect from the two rate cuts this year.

Other economic data showed a mixed picture. Production in the mining and manufacturing industries diminished 2.9 percent in August from a year ago, while output in the services sector gained 2.4 percent in the month.

Facility investment slipped 2.7 percent in August on a yearly basis amid the lingering external uncertainties.

Retail sales, which reflect private consumption, increased 4.1 percent in August from a year earlier. Sentiment among consumers over economic situations improved in September compared with the previous month.

The recovery in consumer spending was attributable to the government's economy policy, called income-led growth, that pushes for the increase in household income, especially among low-income bracket, to narrow an income gap.

The total number of those employed advanced 452,000 in August from a year earlier on the government's measures to create jobs among the elderly population that takes up a large part of the low-income bracket.