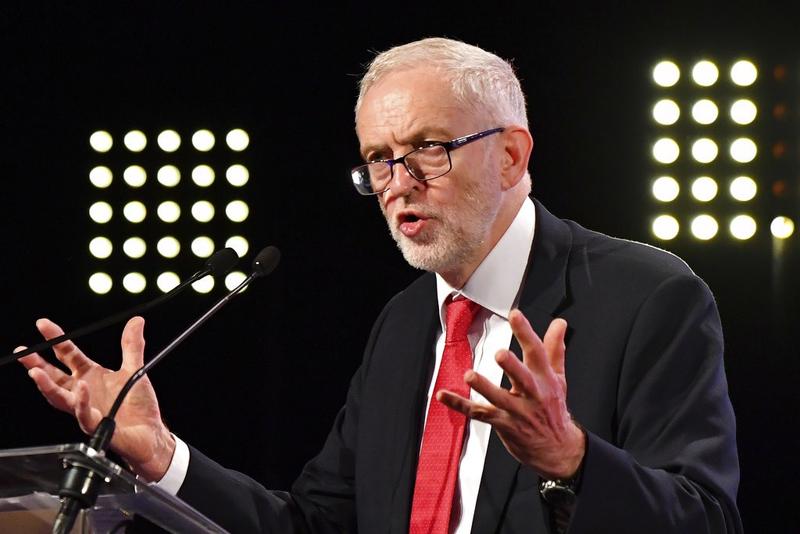 In this Oct 19, 2017 file photo, Britain's Labor Party leader Jeremy Corbyn delivers a speech prior to a meeting of European Socialists prior to an EU summit in Brussels. (GEERT VANDEN WIJINGAERT / AP)

LONDON - British opposition leader Jeremy Corbyn is due on Monday to support staying in a customs union with the EU after Brexit, a move that could lead to a major parliamentary defeat for Prime Minister Theresa May.

As May tries to strike a divorce deal with the European Union by October, she is facing a rebellion by a small group of pro-Europeans inside her Conservative Party that Labor Party head Corbyn hopes to use to undermine her authority.

May has ruled out any customs union with the EU after Brexit because it would prevent Britain from striking new trade deals with fast-growing economies including as China and India.

Labor's Brexit policy chief Keir Starmer said on Sunday his party has agreed that if it wins power it would negotiate to remain permanently in a new customs union with the bloc.

If Corbyn explicitly backs a customs union in a speech on Monday then it could set the stage for Labor lawmakers to join Conservative rebels in supporting the necessary amendments to trade legislation.

But Corbyn, a veteran left-wing lawmaker, is expected to disappoint some politicians in his party by indicating he, like May, favors taking Britain out of the EU's single market.

"Labor would negotiate a new and strong relationship with the single market that includes full tariff-free access and a floor under existing rights, standards and protections."

Supporters of Brexit have long said striking trade deals around the world would represent one of the big potential gains for Britain from leaving the EU.

If instead it stayed in a customs union with the EU, Britain could avoid tariff barriers for its exports to the bloc as well as the risk of a return to a 'hard border' between Northern Ireland and the Republic of Ireland, a prospect that alarms many in Dublin and Belfast.

Labor is narrowly ahead in opinion polls but, like the ruling Conservative party, it remains deeply divided on its Brexit strategy as the clock ticks towards Britain's formal exit from the EU in March next year.

The party's divisions were exposed over the weekend when more than 80 senior figures in the party called on Corbyn to commit to remaining in the EU's single market.

Labor's Brexit policy chief Starmer warned that "crunch time is coming" for May and Labor would probably support the amendments to the trade bill.

Trade Secretary Liam Fox said the government would delay the key vote on the bill partly because it wanted more time to convince its own lawmakers to vote with the government.

May is due to set out her own vision for Britain's post-Brexit relationship with the EU in a speech on Friday. She hosted an eight-hour meeting of her top Brexit ministers last week in an attempt to forge a common position.