The next big name in beauty 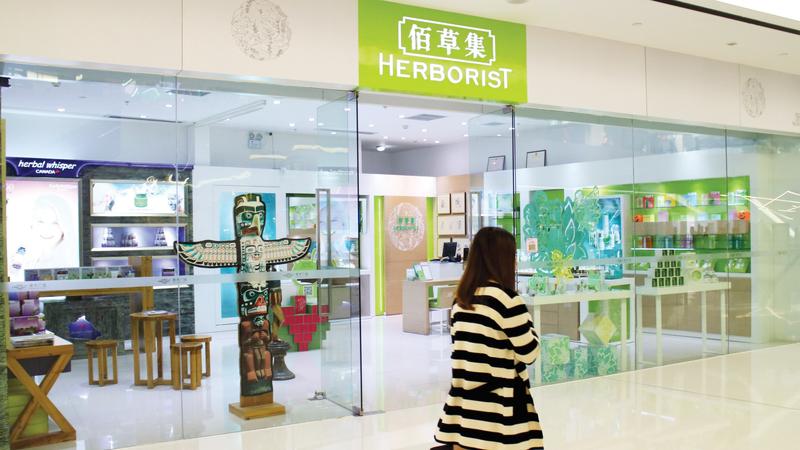 A customer walks past a store of Chinese herbal-based cosmetics and skin-care product maker Herborist in Fuzhou city, East China’s Fujian province. The brand claims to use the best Chinese herbs and has started to gain a following in France. (PHOTO / IMAGINECHINA)

The face of the Asian beauty industry is changing.

Cosmetics counters used to be chock-full of US and European brands. But then Japanese brands established themselves as a force to be reckoned with, and this was followed by the wave of South Korean companies cashing in on the region’s growing beauty needs.

Now, Chinese brands are making moves to be the next big thing in beauty.

As the middle class in China continues to expand and the country moves from a factory-based to innovation-based economy, “the demand for aesthetic treatments is growing exponentially”, said Lee Buckler, president and CEO of RepliCel, which had previously worked with Japanese brand Shiseido on developing hair loss products.

“The concept of regenerative medicine, and autologous cell therapy, resonate well with traditional Chinese medicine, creating industry demand for these kinds of products,” he said.

Yofoto is also putting its hopes on RepliCel’s advances in injection devices that could boost beauty consumerism in China.

“Because the device promises to enable new treatments for fine wrinkles, it has the potential to trigger an increase in the sale of more dermal fillers for use in these procedures, resulting in a boon to the suppliers of those products,” Buckler said.

It is these kinds of deals that drive Chinese brands to stake their claim in the beauty industry. And some say they are already seeing strong numbers.

Martin added that Chinese beauty brands now mostly focus on gaining a foothold in the mid-level and entry-price range markets. The premium sector is currently dominated by French, South Korean, US and Japanese brands.

OC&C’s survey on Chinese beauty product consumers found that premiumization was a major trend, with 58 percent of survey respondents claiming that they traded up to more expensive product lines within the same brands last year, while 36 percent of respondents upgraded to more premium brands.

Better ingredients and improved functionality were the key reasons cited by 39 percent of the 2,800 respondents across 20 first-tier to third-tier cities for their decision to switch to more premium lines or brands in the last year.

There is no reason why Chinese brands could not join the premium ranks soon.

Companies like Jala, Suhu and Shanghai-listed Proya are stepping up how much they spend on research and development, or even acquiring firms abroad, both to diversify and put out higher quality products. Proya owns the Uzero and Cats & Roses brands and has in recent years launched Hapsode.

Chinese cosmetics producers have been making big hires in recent years, looking to attract top global talent. In so doing, they are gaining market share at home and abroad, often at the expense of South Korean cosmetics makers.

The stakes are high. Euromonitor International, a market research firm, expects that the beauty and personal care market in China will be worth almost US$62 billion by 2020. Cosmetics sales in China could rise to US$40 billion by 2021, making it larger than the US.

And as they work to grow alongside the Chinese market, the country’s cosmetics and beauty companies may benefit from a coincidental side-effect: The global market is also improving.

Euromonitor expected a continued uptick in the last quarter of 2017, with skin care seeing “the most significant upgrade”.

In the personal care space, brands like Shanghai Chicmax, Shanghai Pehchaolin and Jala have taken over the spaces in the top 10 in China that were previously held by Estee Lauder, Amway, Beiersdorf and Johnson & Johnson, according to Euromonitor data.

The importance of the market can also be seen in the efforts that foreign companies are putting into reaching Chinese consumers. L’Oreal, for example, uses lab-grown Chinese skin, reconstructed from living cells donated for research, to test and develop products such as anti-aging or skin-whitening creams or pollution cleansers.

For the time being, foreign companies, manufacturers and brands like Procter & Gamble, L’Oreal, Shiseido and Unilever control around 90 percent of the market in China, but domestic players are chipping away at that dominance. It is likely just a matter of time before a truly global premium cosmetics brand emerges out of China.

“Chinese conglomerates could do so by either starting a new brand or buying over an existing brand,” said Martin at OC&C Strategy Consultants.

Japan’s Shu Uemura started off as a boutique label created by a makeup expert with a signature cleansing oil in the 1960s. It was not until it was bought by L’Oreal in 2004 that it expanded rapidly.

“So, acquiring a brand with a strong DNA could be the approach a company wants to take if they want to expand in premium segments that they don’t already have a presence in,” Martin said.

“Chinese companies still haven’t invested heavily in this sector as they have done in other areas. And they also have all the best practices in the playbook from most advanced brands to bolster their efforts. Sooner or later, they will do it.”

There are already steps taken in that direction. Herborist (or Bao Cao Ji), under Shanghai Jahwa cosmetics, opened a flagship store in Paris in April 2015 and has held European Union certification since 2008. The brand claims to use the best of Chinese herbs for its range of products and has started to gain a following in France.

It has also done well domestically. It was the only Chinese brand to be ranked in the top 10 cosmetics brands by market share at department stores in China (at No 8), according to China Market Monitor.

What can only help is China’s rich tradition of beauty secrets — such as rice water, powdered pearls and a host of other natural herbs and oils. It is perhaps this angle — offering unique, niche products for the market — that will enable Chinese brands to stand out from their international competitors.

For any brand, building a strong signature product is the key to getting customers on board.

“Premium brands are about a more intimate approach and a one-on-one experience, not just an expensive price tag or its origin. If companies can understand and offer that, they can build a premium brand too,” Martin said.