Editor's note: This is the fourth in a series of stories focusing on the Xinjiang Uygur autonomous region, looking at developments in the environment, the economy and the cultural and business sectors, and poverty alleviation measures. 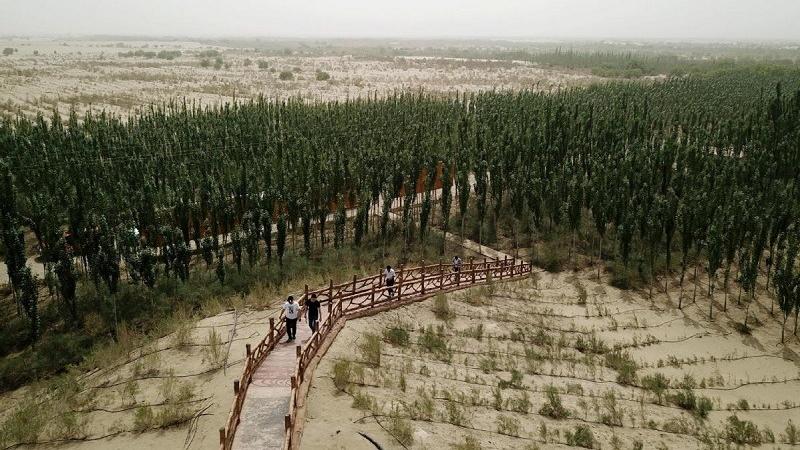 People walk across a bridge in the man-made woods in Makit county, Kashgar, Xinjiang Uygur autonomous region. In 2012, the local government launched a project to convert about 66,000 hectares of desert on the county outskirts into woods. (ZHANG GUIGUI/FOR CHINA DAILY)

After decades of playing economic catch-up at the price of environmental degradation, China has learned to seek financial returns by restoring the land.

Now, some of the most rewarding examples of this policy shift can be found in the country's least-developed regions.

In Kashgar, Xinjiang Uygur autonomous region, government-led projects to slow desertification and reclaim the land are transforming an area that is home to 1.2 million rural poor, accounting for almost 40 percent of the region's total impoverished population.

In Kashgar, Xinjiang Uygur autonomous region, government-led projects to slow desertification and reclaim the land are transforming an area that is home to 1.2 million rural poor

These massive campaigns have improved the environment and boosted yields of traditional crops, such as cotton. They have also shored up income from lucrative cash crops by providing arable land in an area known for its harsh environment and lack of workable soil.

One of the places leading the fight is Makit county, Kashgar, which lies immediately west of the Taklimakan Desert, the second-largest area of shifting sand dunes in the world, spanning more than 1,000 kilometers across southern Xinjiang.

For as long as the locals can remember, raging year-round sandstorms have made farming an arduous undertaking. For generations, local families, mostly members of the Uygur ethnic group who own less than 1 hectare of sandy land per household, have struggled to feed themselves.

Osman Ataula, 40, who recently shook off poverty with government aid, said spring sandstorms are the most catastrophic for cotton farmers like him, because they rip apart the plastic mulch used to keep land moist and tear off nearly all the buds.

"It is common to replant several times a year," he said. "Then, I have to seek temporary jobs to help with the family expenses."

However, in 2012, the sand began retreating after the local government launched a project to convert about 66,000 hectares of desert on the outskirts of Makit into woods comprised of saxaul and poplar, drought-resistant trees whose roots bind the sand and prevent invasive sandstorms.

To that end, 50-meter-wide belts of towering poplars were planted densely in a bid to reduce wind erosion. At the same time, saxaul trees were planted in neat rows between the poplar belts to improve the condition of the soil. 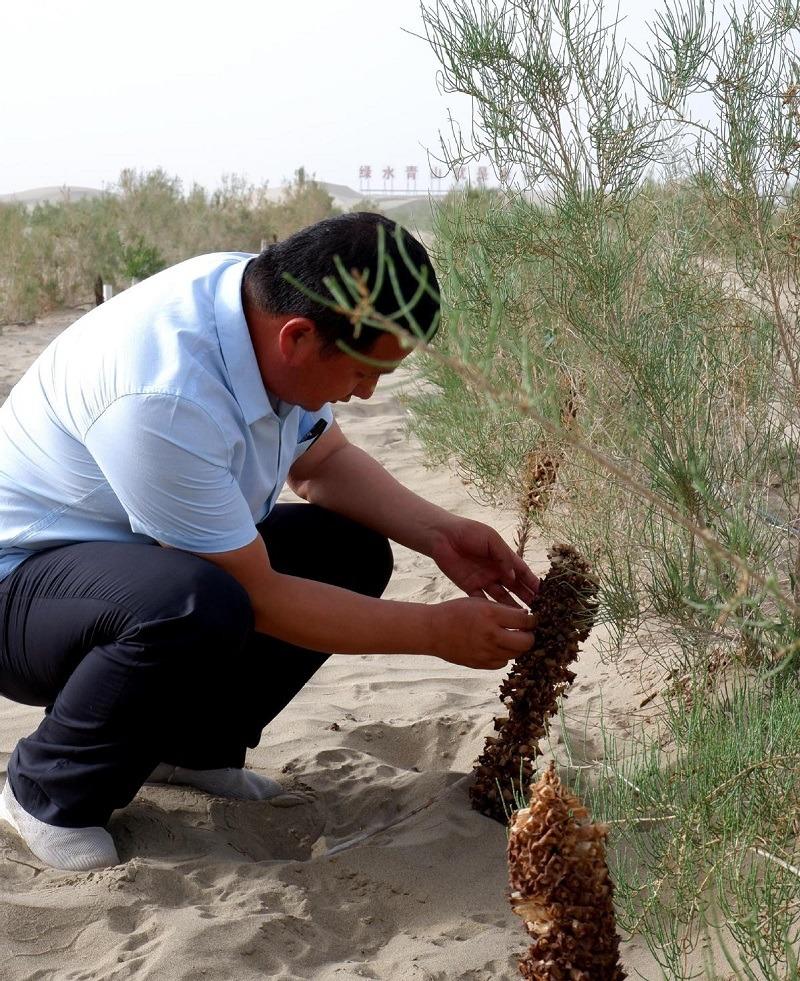 Wang Yufeng, director of the county's natural resources bureau, who has headed the program for the past seven years, said the project, which has provided job opportunities for hundreds of farmers, is about one-third complete. "That's more than 190 million trees," he said.

The 42-year-old said farmers have been hired to preserve the environmental shield by watering the saplings at night, using a drip irrigation network to reduce evaporation, and placing wire fencing around the young trees to protect them from animals.

The work can bring as much as 60,000 yuan (US$8,684) a year to poor households, easily lifting a family's average income above the region's annual poverty line of about 3,000 yuan per person.

According to local meteorological authorities, Makit saw 100 millimeters of rainfall last year, compared with only half that amount a decade ago. Meanwhile, sandstorms only occur about 50 days a year, from about 150 in 2009.

Wang said a positive cycle is being developed, because "more rain makes the rest of the work easier". At present, irrigation is essential to the survival of saplings in the first year after planting, but the rise in rainfall is expected to result in a shorter period of dependency.

In addition to the environmental progress, the man-made green belts provide vast swathes of land for the cultivation of cash crops that thrive in arid conditions.

In 2016, Wang's team began planting cistanche tubulosa in the woods. The parasitic plant - which has high added value due to its wide use in traditional Chinese medicine and cooking - obtains nutrients and water from the saxaul it grows upon. It is fast-growing too, and is ready for sale just 18 months after planting.

Figures provided by the local government show that 1 hectare of treated land produces about 2,250 kilograms of cistanche tubulosa per harvest, bringing in net profit of about 10,500 yuan. Cultivation of the hardy desert plant has provided jobs for about 200 poor farmers. 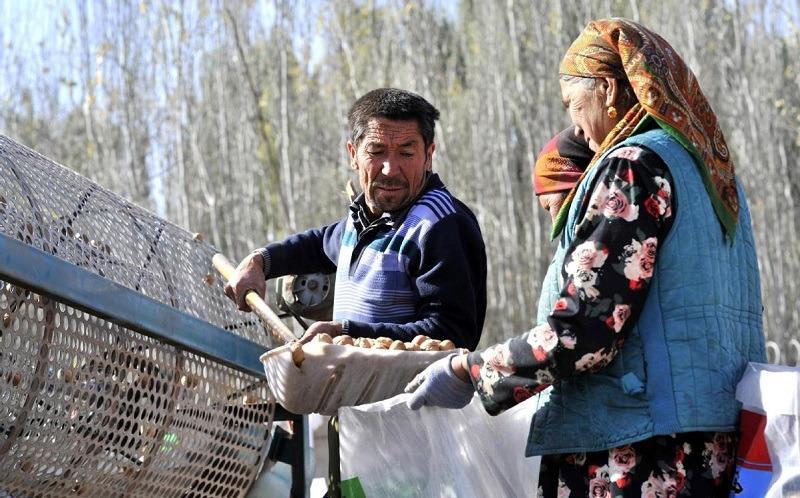 Wang said the team is exploring other ways to generate profits from the improved environment, such as developing organic farming by raising chickens in the shade provided by the saxaul trees.

Makit is not the only success story, though. In Yecheng county, further south in Kashgar, authorities have achieved similar goals with a slightly different approach.

Over the past four years, Yecheng has encircled large swaths of desert with belts of poplars, while large numbers of Russian olive, a more-drought-resilient tree, have been sown to improve the soil in the encircled areas.

The county government has leased the land at a low rate to an agricultural company, which uses it to grow cash crops such as goji berries, apples, watermelons and forage grass. In turn, the company's operations provide jobs for impoverished local people.

Lin Guoyin, deputy director of Yecheng's agricultural bureau, said there has been a fundamental shift in officials' attitudes toward financial input into the environment, with many realizing its significance for economic growth and poverty relief.

"A better environment is usually followed by rich agricultural output, then by the development of the manufacturing sector, and in time by tourism, which could boost local residents' incomes," he said.

He added that local tourism authorities are considering using the improved environment and the spectacular views of the sprawling Taklimakan outside the county to grow the sector.

The efforts signal the latest triumph against the deserts that wreaked havoc in past decades.

One of the earliest and most successful endeavors was at Saihanba, a forest in Hebei province that was a lush, royal hunting ground for many centuries. However, by the 1920s, its 20,000 hectares had become a sprawling desert as a result of decades of excessive logging, and it fueled sandstorms across North China.

In the 1960s, a reforestation program was introduced to restore the environment and turn the desert into a national forest park. In 2017, the achievement was recognized by the UN Environment Program, when it presented the "afforestation community" with its Champions of the Earth award. 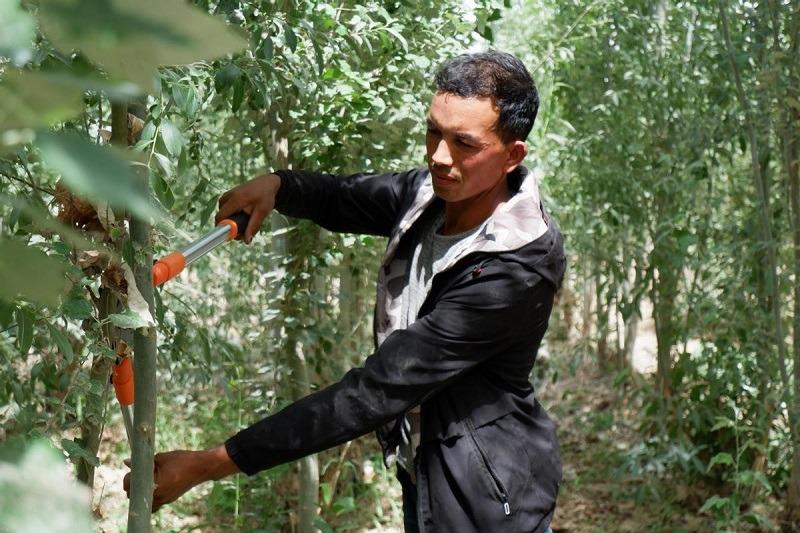 Musayif Muniyaz, a farmer in Yecheng who has been lifted out of poverty, trims poplar trees. (LI LEI / CHINA DAILY)

Further success has been seen in the Kubuqi Desert in the Inner Mongolia autonomous region.

Over the past three decades, the Kubuqi Desert Greening Project has succeeded in reining in the expansion of China's seventh-largest desert, which is roughly the size of Kuwait. It has also turned about 6,000 square kilometers of the desert, about 30 percent, green.

The central authorities' push for greener development was reinforced in 2012, when the Communist Party of China added environmental preservation to its blueprint for overall construction of a socialist China, extending the previous four sectors: the economy; politics; culture; and civil society.

The move was in stark contrast to the previous development model that had been used for decades - achieving double-digit economic growth at any cost and ignoring the heavy environmental damage.

Now, officials who neglect environmental preservation face punishment. The most recent example is the Qinling Mountains of Shaanxi province, where thousands of lavish, but illegally built, villas have been demolished in the past year to restore a number of natural conservation zones at the foot of the mountain range.

Several powerful figures, including Zhao Zhengyong, former Party secretary of Shaanxi, and Wei Minzhou, a former senior provincial legislator, were dismissed after being found guilty of allowing the villas to be built. Moreover, about 1,000 local officials were censured for negligence.

Now, banners reading "lucid waters and lush mountains are invaluable assets" can been seen everywhere, both on the streets of big cities and painted on walls in villages yet to shake off poverty.

That maxim, coined by President Xi Jinping in 2005 when he was Party secretary of Zhejiang province, is guiding officials at all levels, from high office to the grassroots.

Jia Junping, head of Chengchuan township, Gansu province, where reforestation efforts have been ongoing for 30 years, said the continuous investment in the environment in the area, a major apple production base, has been repaid several times over.

He added that the improved forestry coverage has resulted in higher levels of rainfall, which has slashed the sky-high cost of irrigating the orchards.

"Drought used to be commonplace, but the tree-planting program has changed that for good," he said.