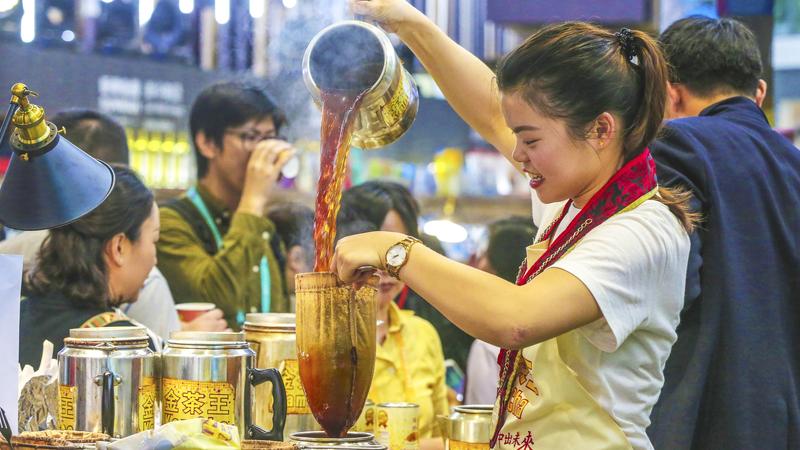 A landmark ban in Singapore on advertising drinks with a high sugar content has finally addressed one of the key reasons behind the rising prevalence of childhood obesity - the unregulated marketing of food products.

Jacqueline Lo Ying-Ru, head of mission and the World Health Organization's representative to Malaysia, Brunei and Singapore, praised the city-state's move, noting that it is a welcome ban because it grapples with the rise in such incidences.

"The proportion of children in Singapore who are overweight or obese rose from 11 percent in 2011 to 13 percent in 2017," Lo said.

Like most countries in the Asia-Pacific region, a fast-paced lifestyle and the affordability of processed food and drinks has prompted rising numbers of Singaporeans to consume more sugar, she said.

This, in turn, has led to them gaining weight, and more cases of noncommunicable diseases such as diabetes, cardiovascular illness and cancer.

Teo Yik Ying, dean of the Saw Swee Hock School of Public Health at the National University of Singapore, expects the ad ban to change the mindsets of both consumers and manufacturers, helping to achieve the overall goal of reducing demand for sugar.

"We see the ban as a way to remove all forms of exposure to high-sugar products from the public - especially children," Teo said. At the same time, he anticipates that the ban will boost production of healthier products.

By applying this ban to only the most unhealthy products, the industry is given a strong incentive to rethink. "The message here is, 'make your products healthier, and we allow you to advertise'," he said.

Teo said the implementation of the measure has been timely, given that data show Singaporeans are consuming more sugar, increasing the incidence of diabetes.

The policy is in line with efforts to tackle diabetes on all fronts - looking at the risk factors - to enable a decision to be made on preventive measures, he said, noting that excessive sugar consumption is "one clear risk factor".

ALSO READ: Taxing times as Asia gets tough on sugar

According to a survey last year by Singapore's Health Promotion Board, Singaporeans on average consume 60 grams of sugar a day - way above the 25 grams recommended by the WHO.

More than half of this intake is from sugar-sweetened drinks. The board said drinking an additional 250 milliliters of sugar-sweetened beverages every day increases the risk of diabetes by up to 26 percent.

Singapore's Ministry of Health said about 440,000 adult residents had diabetes in 2014. The number is predicted to grow to 1 million in 2050. A ban on drinks with a high sugar content, introduced on Oct 15, came after the ministry and the board held a public consultation from Dec 4 to Jan 25.

More than 70 percent of the 4,000 people who took part in the consultation supported the introduction of regulations to restrict ads for "less healthy sugar-sweetened drinks".

"They felt this could help reduce the influence of advertisements on consumers' purchasing and consumption decisions, especially among children and teenagers," the ministry and board said in a joint report.

Tan Soo Jiuan, associate professor in the Department of Marketing at the National University of Singapore Business School, said the ban on ads is the first step toward curbing the desire for drinks that contain sugar.

She said that the ban will at least remove one level of temptation for consumers. However, reducing their exposure to enticing ads is not enough, Tan said, adding that other avenues are used to attract customers to sugary drinks, including retail and fast-food outlets.

The WHO said what is more worrying about the marketing of foods and drinks in general is that it is mostly focused on children.

Most of the foods marketed to them are high in saturated fats, trans fatty acids, free sugars and salt - and are detrimental to children who are "extremely susceptible" to such marketing, through which they adopt unhealthy eating habits that can last through adulthood.

"That is why the WHO is recommending a set of measures to reduce sugar consumption, such as more-stringent regulation of food and sugary drinks marketed to children," the organization's Lo said.

Kevin Tan, president of Diabetes Singapore, said enforcing the ban on advertising is in line with the country's War on Diabetes program, which was launched in 2016.

"The aim is to reduce the prevalence of diabetes and obesity in the country," he said.

He added that in addition to the advertising ban, the Ministry of Heath requires manufacturers to display a graded, color-coded, front-of-pack summary label of nutrients for prepackaged, sugar-sweetened drinks. He said this will help educate the public and encourage manufacturers to reformulate their products.

The ministry and the Health Promotion Board said the measures are part of their long-term goal to reshape consumer behavior and choices.

They will also conduct consumer focus group discussions on label design and get feedback from drinks manufacturers and the advertising industry.