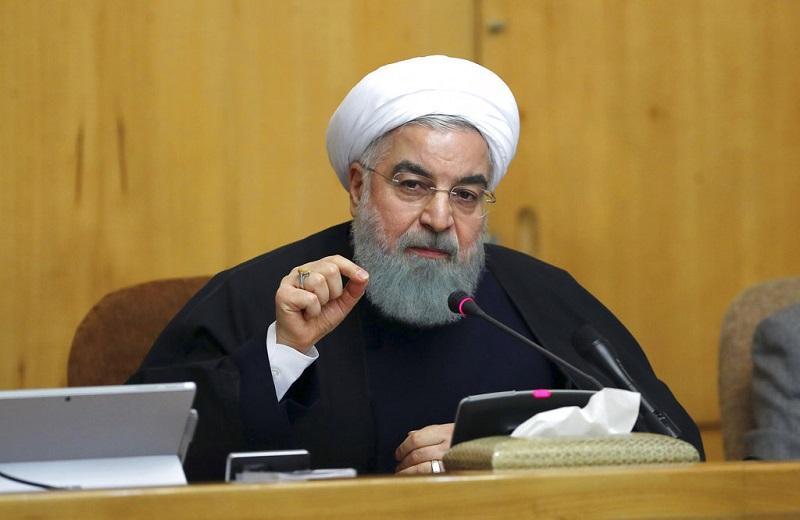 In this photo released by official website of the office of the Iranian Presidency, President Hassan Rouhani speaks in a cabinet meeting in Tehran, Iran, Dec 31, 2017. (IRANIAN PRESIDENCY OFFICE VIA AP)

TEHRAN - Iranian President Hassan Rouhani on Monday sought for the assurance of parties involved in the landmark 2015 nuclear deal, except the United States, to help Iran preserve interests under the accord.

If our expectations from the Joint Comprehensive Plan of Action (JCPOA) are met without the United States, so much the better. Otherwise, we will make our own decision

"If our expectations from the Joint Comprehensive Plan of Action (JCPOA) are met without the United States, so much the better," Rouhani said for the first time, according to official IRNA news agency.

"Otherwise, we will make our own decision," he said in Iran's northeastern Mashhad city.

Also, Tasnim news agency reported on Monday quoting Rouhani as saying that "we have our own plan. If what we demand from the JCPOA is fulfilled by the non-American (parties in the deal), the US withdrawal will be the removal of a trouble."

"Or, we will follow our legal and rational option if what we expect is not fully accomplished," Rouhani said.

Rouhani said that except few countries, including the United States, the whole world trusts Iran and wants to preserve the JCPOA.

"Today we are telling the world that if you are worried about Iran's access to nuclear bomb, we have allayed this concern in the JCPOA and the deal ensures that Iran does not seek nuclear weapons," he was quoted as saying.

He warned Washington against the "strategic mistake" of withdrawing from the nuclear deal, reiterating that Iran has no concerns about the US "cruel policies and wrong moves."

The Iranian president further lashed out at the US policies in the Middle East, saying that over the past decades, US officials have sought to contain Iran's power and influence in the region, and "no matter they remain in the nuclear deal or leave it, they pursue such a policy."

Rouhani vowed that the Islamic republic will withstand the US objective to reduce Iran's regional power and influence.

US President Trump is expected to decide by May 12 whether to pull out of the nuclear deal, and he has said that he would not extend the waiver suspending the US sanctions on Iran.

In January, Trump extended sanctions relief on Iran under the deal for the last time, threatening to withdraw from it if US congress and his European allies cannot fix the alleged "disastrous flaws."

Besides, Iran's Foreign Minister Mohammad Javad Zarif said Monday that any possible move by the United States to withdraw from the nuclear deal with Iran will result in the isolation of Washington in the international community.

"The US exit from the JCPOA will show that the Americans are isolated and are no longer trustworthy for international interactions," Zarif was quoted as saying by Press TV.

The Islamic republic would definitely show a strong reaction to a possible U.S. decision to pull out of the JCPOA, he said.

Over the past days "we are negotiating with other parties to the JCPOA, which include the five other members and the European Union," Zarif said.

On Monday, Iran's Foreign Ministry spokesman also said that withdrawal from Iranian international nuclear deal is not as easy as it may seem.

Bahram Qasemi said the 2015 deal has its own complexities and US withdrawal would not be easily feasible.

However, if the United States decides to do so, Iran's reaction would be "painful" for Washington and will make them regret it, he said at his weekly press conference.

He added that the lack of commitment on the part of the U.S. was nothing new, but its decision to scrap the JCPOA would present a clearer image of the country to the world and would prove that no country can trust the US anymore.

Besides, the United States should accept the consequence of their decision, he said.

Qasemi reiterated that Iran will not be the first to exit the deal, but it is prepared for any scenario.