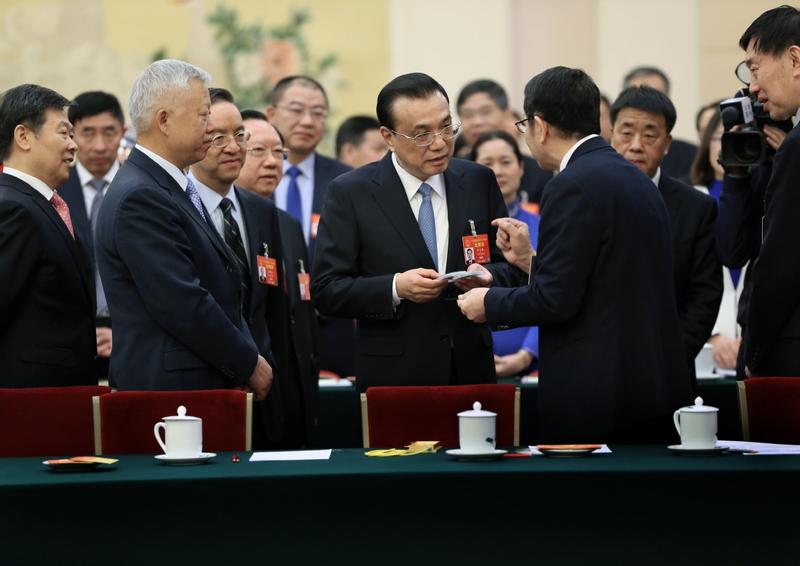 Premier Li Keqiang called on Hubei province on Friday to continue kindling researchers' enthusiasm for technological and business innovation and to accelerate the transformation from old economic drivers to new ones.

Hubei, in Central China, should promote innovation and entrepreneurship to cultivate new industries, especially as it is home to a large number of research institutions, universities and professionals, Li said when joining a panel discussion with National People's Congress deputies from the province.

The number of universities in Wuhan, the provincial capital, ranks second－behind only Beijing－among Chinese cities.

The premier urged the province to build a market-and law-based internationalized business environment, while reducing taxes, fees and institutional costs.

Li said Hubei's major economic indicators were higher than the national average last year. The province should enhance administrative reforms to improve the business environment and strengthen infrastructure, he said.

He also called on the province to make greater efforts in attracting talent and stimulating market vitality to withstand downward economic pressure.

Hubei is a leading province in Central China in terms of economic development and should strive to progress as rapidly as the more developed eastern part of the country, Li said.

The province's GDP grew 7.8 percent year-on-year to 3.94 trillion yuan (US$586.14 billion) last year, said Jiang Chaoliang, secretary of the Hubei Provincial Committee of the Communist Party of China. Last year, 890,000 new market entities were registered in Hubei, taking the total number to 5 million, and more than 920,000 people found new jobs in urban areas. The province aims to lift 900,000 people out of poverty this year, he said.

Hubei has the geographic advantage of being the connection between the northern and southern parts of China. It also has an education advantage, ranking first in university enrollments among Chinese cities.

The Wuhan East Lake High-Tech Development Zone, known as the "Optics Valley of China" and one of China's earliest such zones, has 42 universities, 56 national key research institutions, 66 academicians, more than 200,000 professionals and more than 800,000 university students.

Dou Xiankang, president of Wuhan University, said basic research, in fields including mathematics and physics, should be strengthened, and the mechanism for selecting talent for scientific and technological innovation should be improved.

Yu Shaohua, deputy general manager of China Information Communication Technologies Group, urged the central government to give more support to boosting innovation in central and western parts of the country.