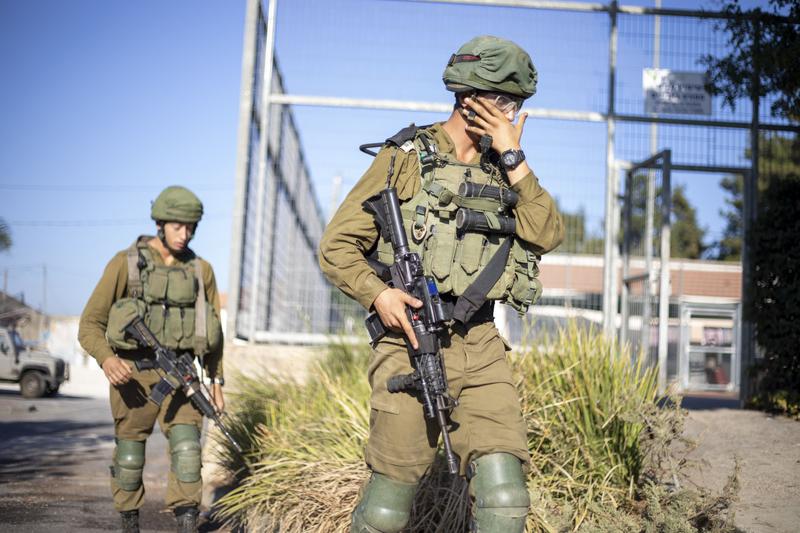 JERUSALEM — Minutes after a Hezbollah anti-tank missile exploded on an Israeli army base, an Israeli military helicopter touched down and medics loaded a soldier on a stretcher aboard. By the time it landed at a Haifa helipad minutes later, TV cameramen were at the scene to film paramedics transferring the soldier into a waiting ambulance.

Only it turns out there were no wounded Israeli soldiers. By Monday morning, Israeli media reported on the "deception operation" the military had waged against the Lebanese militant group the day before in the thick of the fog of war. The Israeli military's aim: to convince Hezbollah that it had scored a direct hit on a military vehicle and inflicted Israeli casualties, and therefore cease fire.

The militant group Hezbollah said its missile attack was retaliation for an Israeli airstrike in Syria a week earlier that killed two of its members. Israel said its bombardment on the outskirts of Damascus thwarted an imminent Hezbollah drone strike force organized by Iran.

The Israeli military had confirmed "hits" in Hezbollah's attack, but was silent throughout the two-hour battle about whether there were any casualties.

In the midst of the media confusion, Cabinet minister Yoav Gallant, a former general, told Army Radio that there were no Israeli casualties before he was apparently told to stop talking to the media.

As part of the Israeli gambit, an army helicopter transported soldiers, bandaged and feigning bloody wounds, to Haifa, where paramedics loaded them into awaiting ambulances to the Rambam Medical Center. The hospital said it had released the soldiers, who were unharmed.

It wasn't clear to what degree Israel's emergency services were involved with the deception. A spokesman for Israel's ambulance service, Magen David Adom, declined comment, deferring to the Israeli military. A hospital spokesman was not available for comment.

Hours later, after the dust settled, Israeli media reported that the entire medevac operation had been an elaborate ruse. Prime Minister Benjamin Netanyahu boasted late Sunday that Israeli forces had not suffered even a "scratch."

The military said it had not distributed any of the videos shown in Israeli media, but declined any further comment on the reported ruse.

On Monday, Hezbollah's Al-Manar TV aired footage that it said showed its missile strike against an Israeli armored vehicle along a border highway.

Israel retaliated for the missile attack with an artillery barrage and helicopter strikes over the border into Lebanon that inflicted no casualties. Within a few hours, after Lebanon's prime minister called the US and France urging the international community to intervene, and a UN peacekeeping mission contacted all sides, calm was restored.

Israel considers the Iranian-backed militant group its most immediate threat. The two battled to a stalemate in a 2006 war, and since then Hezbollah is believed to have amassed a stockpile of some 130,000 missiles and rockets.

Israel has carried out scores of strikes in neighboring Syria to prevent alleged Iranian arms transfers to its Lebanese proxy.