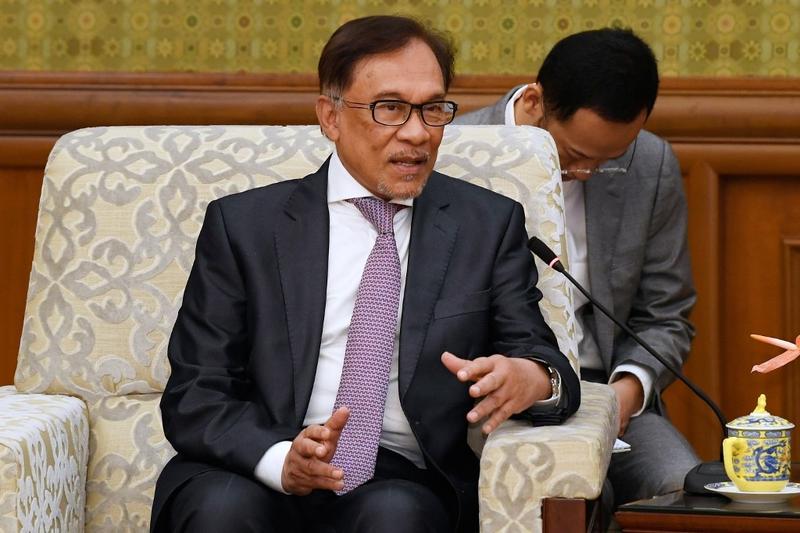 Malaysia's Anwar Ibrahim speaks to China's Foreign Minister Wang Yi (not in frame) during a meeting at the Diaoyutai State Guesthouse in Beijing on Oct 24, 2018. (DAISUKE SUZUKI / POOL / AFP)

KUALA LUMPUR — Anwar Ibrahim, in line to take over Malaysia's premiership, will be called in for questioning over allegations that he had sexually assaulted a former male aide, police said on Wednesday.

Anwar has denied the accusation by the aide, Muhammed Yusoff Rawther, describing it as "politics at its worst".

Muhammed Yusoff is being represented by a lawyer who counts Prime Minister Mahathir Mohamad among his clients.

On Tuesday, Mahathir promised to hand over power to rival-turned-ally Anwar in spite of the latest allegations against him.

Muhammed Yusoff said last week that Anwar had attempted to force him to have sex in September 2018.

"Statements from Anwar Ibrahim and several related witnesses will be taken as soon as appropriate appointment times are set," Huzir said.

In a statement to media, Anwar said he was grateful to police for speeding up investigations into the "latest defamatory allegations" against him.

"I would like to stress that I am ready to give my statement to the police immediately to assist in the investigation."

Anwar has spent nearly a decade in jail on two separate counts of sodomy and for corruption, charges that he and his supporters maintain were aimed at ending his political career.

Muhammed Yusoff's lawyer, Mohamed Haniff Khatri Abdulla, denied a conflict of interest in taking on a case against the prime minister's planned successor.

"The prime minister is still my client but that does not mean I should not take on cases just because they involve his ministers or people in his administration," Mohamed Haniff told Reuters.

"I did not speak to (Mahathir) before taking on this case, but we did talk about it afterwards. He was surprised but he understood."

Mahathir's office did not immediately respond to a request for comment.

Same-sex acts are illegal in Muslim-majority Malaysia, and carry penalties of up to 20 years in jail if convicted

Mohamed Haniff denied charges of a political conspiracy in the allegations against Anwar, saying Muhammed Yusoff stood by his statement.

"It's time to let the police investigate," he said.

Same-sex acts are illegal in Muslim-majority Malaysia, and carry penalties of up to 20 years in jail if convicted.

A former deputy premier, Anwar was first sacked and then jailed in 1999 during Mahathir's first 1981-2003 tenure as prime minister.

Mahathir and Anwar mended fences in 2016, joining forces to lead the opposition to an unexpected election victory last year.