Editor's Note: China has made history in space exploration by landing the Chang'e-4 spacecraft on the far side of the Moon. While most leaders and scientists have applauded China's achievement, certain parties view China's progress in space technology as a threat. Are their worries well founded? Three experts share their views on the issue with China Daily's Liu Jianna. Excerpts follow: 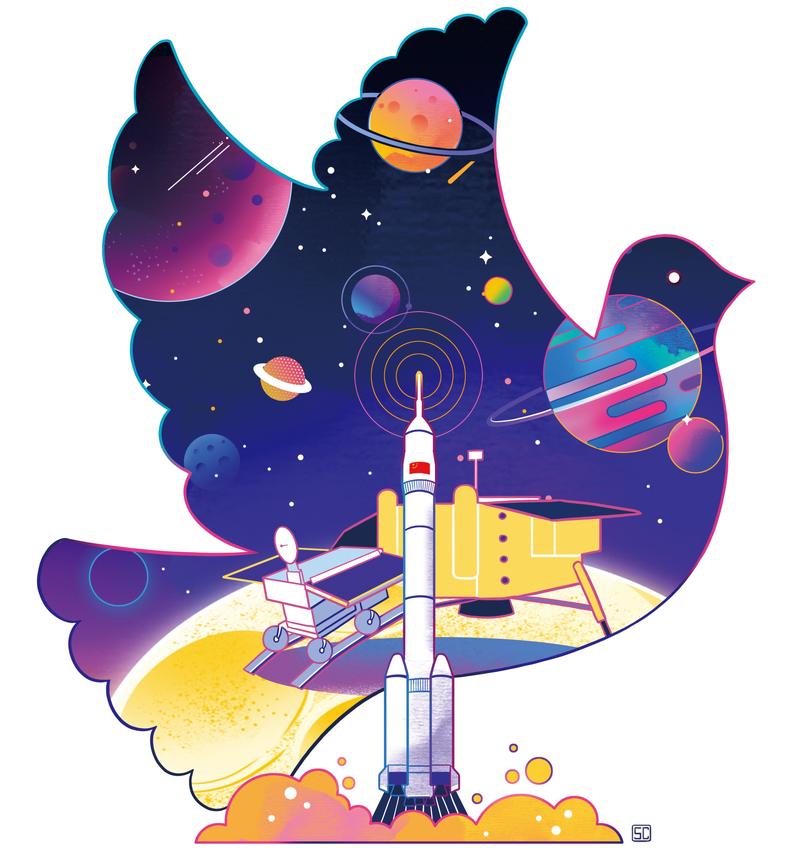 Space should not be weaponized

Some countries have raced each other in space research largely to acquaint humans with the final frontier and better serve the development needs of the people in the fourth dimension. Yet China has been viewed with undue suspicion by certain countries because of the advances it has made in space exploration. Their attitude smacks of Sino-phobia.

Unlike the United States' blatant moves to militarize outer space, not least by establishing a Space Command, China has always opposed the militarization of space and called for peaceful use of outer space. Aren't the US' space programs more worrisome?

Although China is a latecomer to the space race, it is on its way to becoming a space power. Breaking new grounds in space exploration, it launched the world's first quantum communications satellite. Also, it is one of a few countries to place a space station (Tiangong) in orbit - which could be the only one in orbit after the International Space Station "retires" around 2025.

Like the Soviet Union and the US, China, too, has used a State-centric approach to develop space technology, as space exploration requires multiple science sectors to work together and it is difficult for private enterprises to pool the huge amount of resources needed for such programs, notwithstanding the success of Space X in launching rockets. Along with its rapid economic development, growing comprehensive strength, effective management and scientific use of resources, this approach has helped China conquer new frontiers in space technology.

Given that space exploration demands the integration of dozens of science sectors including materials, communications and network technology, it could propel the development of relevant industries. Which in turn could create new possibilities for future generations, and help improve the lives of the present generations. For instance, the positioning system and imaging technology have helped authorities to make preparations in advance to cope with natural disasters, as well as help explore resources.

The existing outer space rules, however, need to be improved, as they are not comprehensive. So a fair, transparent and open legal system should be established to give all countries involved in space research equal rights and obligations, and ensure they are all part of the body that makes the new space rules. More importantly, the rules should bar the weaponization of space, especially because the US is not willing to make any promises on that front.

Essentially, the urge to explore the unknown has prompted countries to conduct space research. Overall, what is at play in space research is nothing more than the thirst for knowledge and to meet practical or potential needs.

Yet the US seems to have other purposes in mind - for example to militarize space and intimidate other countries by establishing a Space Command. China has always opposed the weaponization of space, and made peaceful use of space a precondition for space research. As such, China will never militarize space, nor will it trigger, or be forced into, an arms race in space, let alone adopt a new type of Strategic Defense Initiative, which former US president Ronald Reagan proposed in 1983 as a strategic defensive system against potential nuclear attacks (from the Soviet Union).

Instead, China would want the US to cooperate on space exploration with the ultimate goal of serving the people as a whole.

Since space is just like a highway, trash left behind by one country could cause harm to all. Therefore, as the two largest economies and major space powers, the US and China should make joint efforts to prevent such a scenario from happening and work together for global common good.

Fan Jishe, a research fellow at the Institute of American Studies, Chinese Academy of Social Sciences

Approach of China and US totally different

Space exploration has become a new battlefield as certain countries are using it to flex their military muscles. Unlike China, whose space exploration focuses on basic scientific research, the US has used space technology to build space shuttles for serving various purposes. The space research conducted by China and the US are totally different in nature.

Many countries, especially China and Russia, have strongly opposed attempts to militarize space, but the US has used advanced technology to maintain its advantages in space. So, to protect its own interests and security, China, too, should build its own space force.

Some people believe that allocating huge funds for space research and exploration could squeeze the resources allocated to improve people's livelihoods. Such misgivings are unwarranted because advancement in space technology would in turn help many an industry to develop faster and generate more economic benefits for the people.