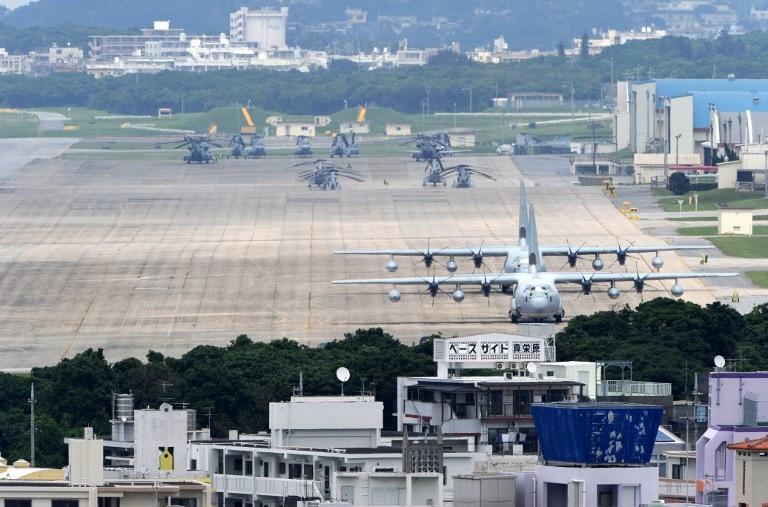 TOKYO - The Naha branch of the Fukuoka High Court in Japan on Wednesday rejected demands from the Okinawa prefectural government to halt the relocation of a controversial US base within Japan's southernmost prefecture, despite calls from officials and locals in Okinawa for the base to be moved off the island.

The Okinawa prefectural government's appeal for the suspension of work for the relocation of the US Marine Corps Air Station Futenma from the crowded residential area of Ginowan to the less populated Henoko coastal district in Nago, both in Okinawa, was dismissed by a lower court with the ruling upheld by the high court on Wednesday.

The central government now plans to restart landfill work on Dec 14 for the construction of the new US replacement military facility, despite the local government highlighting the fact that documents necessary for temporarily storing soil and sand near the construction site had not been submitted, along with a number of other issues of contention.

The central government now plans to restart landfill work on Dec 14 for the construction of the new US replacement military facility, which would involve 157 hectares of land being reclaimed from pristine waters off the Henoko area and the building of a V-shaped runway

ALSO READ: Japan resumes work at disputed site for US base relocation

Okinawa hosts the bulk of US military facilities in Japan, yet the sub-tropical island accounts for just a small fraction of Japan's total landmass.

As well as shouldering the majority of US bases and being victims of US base-linked workers' criminal activities, the new location for the base has an extremely delicate ecosystem unique to Okinawa that the locals desperately want to protect.

The overall plans for the new base involve 157 hectares of land being reclaimed from pristine waters off the Henoko area and the building of a V-shaped runway.

The plans stem from a pact made between the US and Japan in 1996, with Henoko being selected as the replacement site in 1999.

The local and central governments have been at odds over the relocation of the base since 1999, with Denny Tamaki, who became Okinawa governor on Oct 4 following the death of his predecessor Governor Takeshi Onaga, urging the central government to reduce Okinawa's disproportionate base-hosting burdens and shift the new base off the island.

Tamaki was elected as governor in September's gubernatorial election on a platform of opposing the base's relocation and lessening Okinawa's base-hosting burdens and has since been pushing to resolve the issue through dialogue with the central government.

The central government, however, despite Tamaki's push for face-to-face talks, has forged ahead unilaterally with land reclamation work necessary to build the new base after the land ministry issued an injunction to suspend Okinawa revoking a permit for the landfill work.

Tamaki had previously said that the central government's persistent push to continue with the landfill work is completely unacceptable and against the will of Okinawans who wish to see the base moved outside of Okinawa and Japan altogether.

Nevertheless, Japanese Defense Minister Takeshi Iwaya told a press briefing on Wednesday that the local chapter of the ministry has begun loading soil and sand brought from a quarry directly onto a vessel for the contentious landfill work to resume.

The new location for the base has an extremely delicate ecosystem unique to Okinawa that the locals desperately want to protect. Environmentalists have also voiced concerns about the materials used for the reclamation work introducing invasive species to the region

Officials in Okinawa have previously stated, however, that the reclamation work runs contrary to the National Biodiversity Strategy of Japan as it is damaging an ecosystem unique to the region.

Environmentalists have also voiced concerns about the materials used for the reclamation work introducing invasive species to the region.

Experts, having surveyed the coral reef at the bottom of the ocean near the tip of one of the seawalls, concluded that the Porites lutea coral, which is part of the reef and just 20 meters away from the tip of the seawall, has a high likelihood of being destroyed by the construction work.

The waters of Oura Bay are also the last home of the highly-endangered Japanese dugong, which is a large marine mammal and cousin of the manatee. Environmentalists are certain of the species' extinction if the central government's construction work continues.

Prefectural authorities in Okinawa have also claimed that the construction work is illegally infringing on the rights granted to local fisherman in the coastal region.

Having already petitioned Washington over the matter, the Okinawa prefecture will hold a referendum on the relocation of the base within the prefecture on Feb 24.

An ordinance was announced on Oct 31, calling for a referendum on the controversial relocation plan by the central government, with the vote taking place within six months, or by the end of April 2019.

Due to there being no major events at the time, the highest voter turnout is expected to be in February, the prefectural government has said.

The prefecture is trying to coordinate all municipalities in Okinawa to take part in the referendum and the majority of cities have confirmed they will field staff members.

According to Tamaki, the referendum will be an extremely important chance for the people of Okinawa to make their voice truly heard in Japan and across the world.

Tamaki said he hopes as many people as possible in Okinawa will take part in the referendum and try and halt the current course of the central government.