In this Jan 3, 2017, photo, newly recruited Houthi fighters chant slogans as they ride a military vehicle during a gathering in the capital Sanaa to mobilize more fighters to battlefronts to fight pro-government forces in several Yemeni cities. (MOHAMMED HUWAIS / AFP)

BAJIL, Yemen — With American backing, the United Arab Emirates has resumed an all-out offensive aimed at capturing Yemen's most vital port, Hodeida, where Shi'ite rebels are digging in to fight to the last man. Thousands of civilians are caught in the middle, trapped by minefields and barrages of mortars and airstrikes.

US Secretary of State Mike Pompeo declared that S. Arabia and the UAE were taking adequate measures to minimize civilian deaths

If the array of Yemeni militias backed by the UAE takes the city, it would be their biggest victory against the rebels, known as Houthis, after a long stalemate in the three-year-old civil war.

But the battle on the Red Sea coast also threatens to throw Yemen into outright famine.

Hodeida's port literally keeps millions of starving Yemenis alive, as the entry point for 70 percent of food imports and international aid. More than 8 million of Yemen's nearly 29 million people have no food other than what is provided by world relief agencies, a figure that continues to rapidly rise.

A protracted siege could cut off that lifeline. The battle has already killed hundreds of civilians and forced hundreds of thousands to flee their homes, adding to the more than 2 million Yemenis displaced by the war. Amid the fighting, cholera cases in the area leaped from 497 in June to 1,347 in August, Save the Children reported Tuesday. 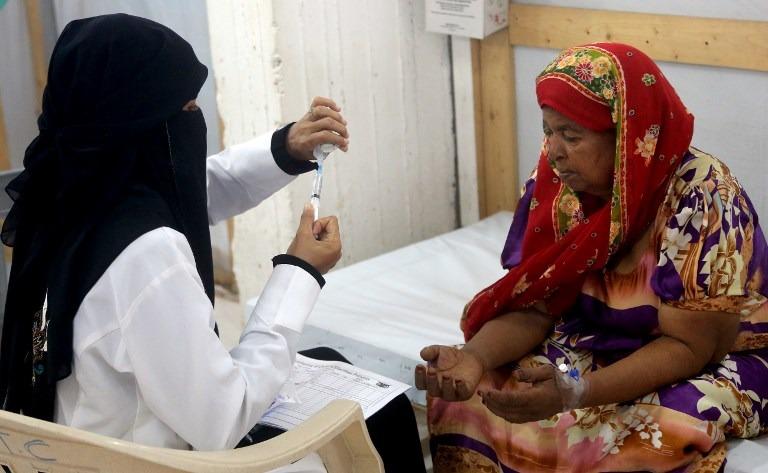 A Yemeni woman suspected of having cholera is treated at a hospital in the Yemeni coastal city of Hodeida on Oct 1, 2018. (ABDO HYDER / AFP)

The assault first began in June, then paused in August as the UN envoy for Yemen tried to cobble together peace talks, the first in two years. That attempt fell apart, and the offensive resumed in mid-September.

The United States effectively gave a green light to push ahead when Secretary of State Mike Pompeo on Sept 12 certified continued American support for the Saudi-led coalition's air campaign against the Houthis. The coalition has come under heavy criticism for its relentless airstrikes since 2015, which UN experts say have caused the majority of the estimated 10,000 civilian deaths in the conflict and could constitute a war crime. Several strikes in August killed dozens of children.

Pompeo declared that Saudi Arabia and the UAE were taking adequate measures to minimize civilian deaths. The US supports the coalition with intelligence and air-to-air refueling for its warplanes, as well as with billions of dollars in arms sales to Saudi Arabia.

Saudi Arabia and the UAE — as well as the United States — say their campaign aims to restore the recognized government of President Abed Rabbo Mansour Hadi and thwart what they contend is an attempt by Iran to seize control in Yemen through the rebels. Iran denies that the Houthis are its proxy.

But the resulting war has pushed Yemen into the world's worst humanitarian disaster, fragmentation and chaos.

A coalition victory at Hodeida would be the first breakthrough after more than two years of deadlock.

After the Houthis took over the capital, Sanaa, and surged south in early 2015, the coalition launched its campaign, pushing them back. Since then, front lines have hardly moved, with the Houthis firmly in control of the north.

The notable exception has been on the Red Sea coast, where since December, UAE-backed forces have battled their way toward Hodeida.

The UAE says taking the port will force the Houthis to the negotiating table.

In this June 13, 2018, photo, a Yemeni pro-government forces flash the victory gesture as they arrive in al-Durayhimi district, about nine kilometres south of Hodeidah international airport. (NABIL HASSAN / AFP)

Hodeida's fall would cost the rebels a major source of income, since they heavily tax commodities and aid coming from the port. That cash has helped them finance their fight and the iron fist they wield in their territory.

But if the Houthis won't negotiate, the coalition faces an even tougher fight into the rebel-held north.

It took two years for the coalition to reach Hodeida, so "how many months or years will it take for this same collection of — often competing and opposed — militias to make their way through Yemen's mountains toward the capital of Sanaa?" said Michael Horton, a fellow at the Jamestown Foundation.

The two sides have pounded each other for months, as some 22,000 UAE-backed Yemeni fighters inch across the flat coastal plain to the city's edges. The force is mainly made up of militiamen from the south or the Hodeida area, backed by tanks and coalition warplanes. They face an estimated 5,000 Houthi fighters.

The coalition fighters are currently trying to encircle the city. But they have hit ferocious resistance at Kilo 16, a point on the main highway heading east from Hodeida to Sanaa. Despite two weeks of fighting, the forces have failed to fully capture it.

The fighting has partially shut the highway, which is not only a key Houthi supply line but also vital for importers and humanitarian agencies moving goods.

Every piece of ground has been gained only with heavy bloodshed. One military official estimated 1,300 fighters killed from the two sides in just the past few weeks. The defending Houthis, working in small units to avoid airstrikes, attack from hiding in foliage. Haydari al-Subaihi, a coalition-backed fighter, recounted how 30 of his comrades were killed at once when a mortar shell hit their position.

"We find vast lands littered with the bodies of the Houthis, many charred from airstrikes," said Mansour al-Lahji, another Emirati-backed militiaman.

'THE WORLD TOPPLED ON OUR HEADS'

Thousands of civilians have been caught in the middle, unable to escape their homes because of heavy bombardment by both sides and the Houthis' minefields.

In Durayhimi, just south of Hodeida city, around 20,000 people remain trapped. Food, fuel and water have run short, and aid agencies cannot reach them, a health official who fled the district said.

Houthis in the district have buried dead fighters and civilians in mass graves, the official said. "When one grave is full, they dig another," he said, speaking on condition of anonymity for fear of reprisals.

Yemenis displaced from the port city of Hodeidah receive humanitarian aid donated by the World Food Programme in the northern province of Hajjah on Sept 25, 2018. (ESSA AHMED / AFP)

Saadia Ibrahim, a grandmother in her 60s, said that as her family fled their village, a Houthi mortar hit near their home, killing three of her relatives. As they drove off, another explosion — she doesn't know what it was — blasted the car, killing four more and throwing her through the air. Wounded by shrapnel, she was rescued by one of her sons on a motorcycle and taken to Bajil, a nearby town crowded with families fleeing the fighting.

"We fled right and left, and then the world toppled on our heads," she said.

The fighting has displaced half a million of the 2.6 million people living in the province where Hodeida is located. Documented civilian deaths in Hodeida spiked to an average 116 a month in June, July and August, up from 44 a month in the first five months of the year, according to the Armed Conflict Location and Event Data Project, a monitoring group cited by UN agencies.

Hodeida port has so far kept operating. The UAE has said it will work to ensure the port stays open, preparing airdrops of food if necessary. 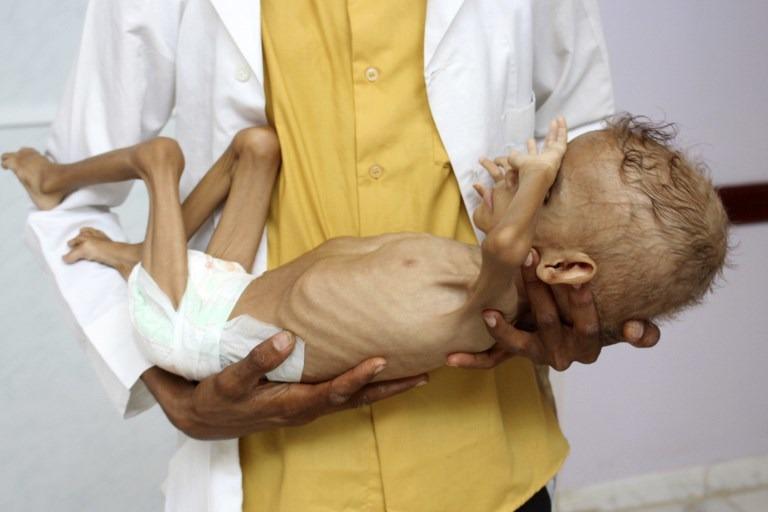 A Yemeni child suffering from malnutrition is carried by a member of hospital staff at a hospital in the district of Aslam in the northwestern Hajjah province on Sept 28, 2018. (ESSA AHMED / AFP)

Coalition spokesman Col Turki al-Malki told the AP that once the city is captured, the coalition will ease restrictions on ships entering the port, which now face long delays as a UN team inspects them to prevent weapon transfers to the Houthis. Port revenues will go to the government, allowing it to pay salaries of its employees, he said.

More and more Yemenis are starving simply because they can't afford to buy food in an economy that has been demolished by fighting, airstrikes and a coalition blockade. With the currency in freefall, the UN has warned that soon another 3.5 million people will need international aid.

Hodeida's fighting has endangered the lifeline. The battle at Kilo 16 forced aid supplies to take longer routes out, slowing deliveries. Also, aid agencies can't reach the nearby Red Sea Mills, one of Yemen's largest granaries, where enough grain to feed 3.5 million people for a month is stored.

The battle brings in to sharp relief a question hanging over the war: What will be the shape of Yemen after all the destruction it has wreaked? Notably absent from the fight to take Hodeida are the forces of Hadi's government — the government that the coalition says it aims to restore. Several pro-Hadi officials told the AP that the UAE squeezed him out.

"The government knows nothing about what is going on in Hodeida," one senior official said. "It's all in the hands of the Emiratis." He and the other officials spoke on condition of anonymity because of the sensitivities of relations with the Emirates. 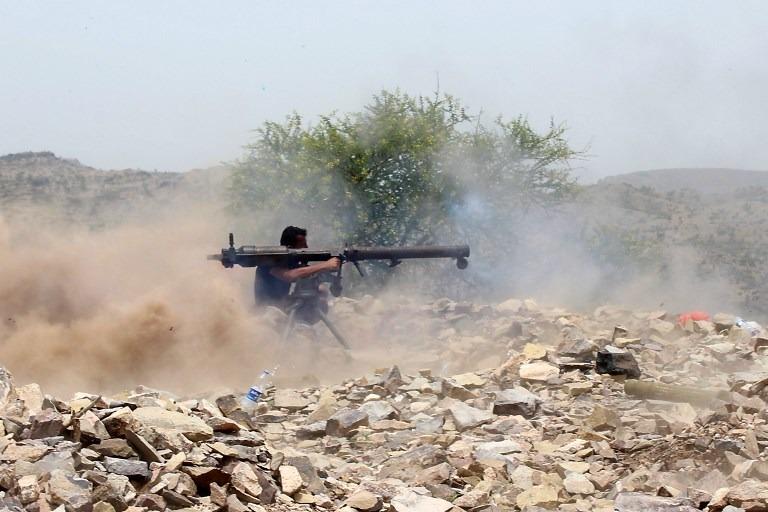 In this July 1, 2018, photo, a Yemeni pro-government fighter fires a recoilless rocket launcher weapon as Saudi and Emirati supported forces take over Houthi bases on the frontline of Kirsh between the province of Taez and Lahj, southwestern Yemen. (Saleh Al-OBEIDI / AFP)

Mistrust runs deep between Hadi's government and the UAE, which has set up military bases across southern Yemen and controls much of the south through the militias it funds. Some Hadi allies accuse the UAE of seeking to impose its own dominion over Yemen — and see the assault on Hodeida as adding another piece to its hold over the country's coastline.

Houthi-free southern Yemen has turned into a patchwork of splintered regions under rival militias. Aden, the southern capital, has seen assassinations and street battles between pro-UAE and pro-Hadi militias, as well as increasing crime, robbery and rape.

The fragmentation has sent a message to Yemenis living under the Houthis' repressive rule that the alternative may not be much better.

"Many Yemenis resent what they see as a neo-colonial land and resource grab," said Horton. "Both Saudi Arabia and the UAE have carved out spheres of influence."