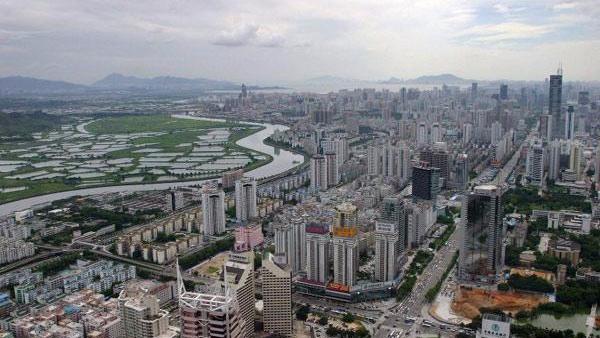 This file photo taken on Aug 18, 2004 shows a view of the skyline of Shenzhen (right), part of the "Shenzhen Special Economic Zone" across the border from Hong Kong. (SAMAMTHA SIN / AFP)

GDP growth in the Greater Bay Area is expected to double until 2023 or 2027 - surpassing the United Kingdom to be the world’s fifth economy, experts on the area say.

The experts made these comments at the announcement of a joint survey by KPMG and the Hong Kong General Chamber of Commerce on Thursday.

Ayesha Lau, managing partner at Hong Kong, KPMG China, said that based on her research, over the next 10 years GDP growth in the bay area is estimated to be 7 to 9 percent year-on-year.

Development of the bay area will have considerable potential benefits to cities like Hong Kong. This includes a freer flow of talents, improving synergies within the region and better market penetration.

Watson Chan, deputy CEO at Hong Kong General Chamber of Commerce, mentioned that the current GDP of the Great Bay Area is $7.39 trillion, representing 13 percent of China’s GDP in total; the bay area stands for 0.6 percent of the nation’s land.

Lau said trade and logistics, financial services and research and development in innovative tech sectors would benefit most from development of the bay area, according to survey respondents.

Lau also said that their survey showed that key factors for success in developing the area will be government support, consistency of laws and regulations, infrastructure support and tax benefits.

Discussing future challenges, Lau said business leaders were concerned about things like protectionism and over dependence on government.

In terms of what role Hong Kong can play in the region, Lau cited comments by Chief Executive Carrie Lam Cheng Yuet-ngor. Lam mentioned earlier that Hong Kong has to continue its role as an international financial center, as a trading hub, and as a global offshore renminbi center.

Lam also said Hong Kong was an asset management and a legal resolution center in Asia Pacific. This indicates that the special administrative region will continue to do well serving certain areas needed in the bay area.

The survey is called The Greater Bay Area Initiative - Key Drivers for Success. It interviewed 614 business executives in June and July 2017. This includes 410 from Hong Kong, 91 from Guangzhou, 82 from Shenzhen and 31 from other bay area cities, from the background of a variety of industries including manufacturing, distribution, e-commerce, retail and logistics.

According to the survey, 80 percent of respondents support the Greater Bay Area initiative.