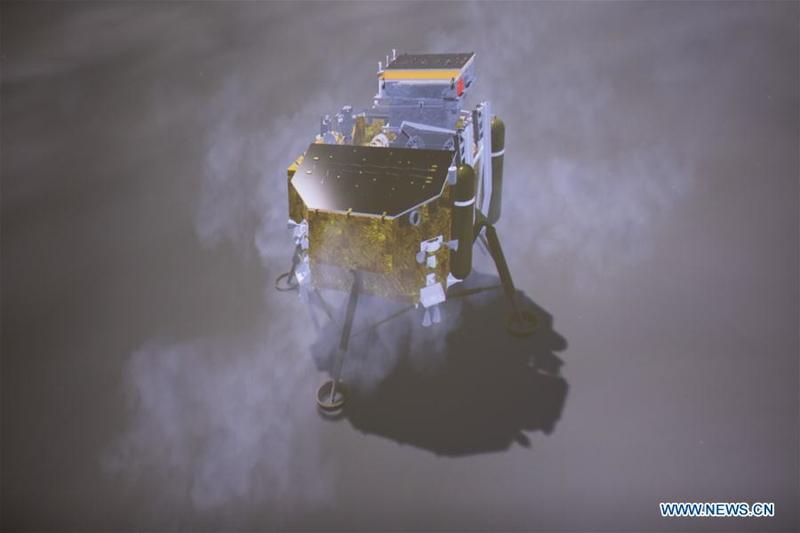 BEIJING - China's Chang'e-4 probe touched down on the far side of the moon Thursday, becoming the first spacecraft to make a soft-landing on the moon's uncharted side that is never visible from earth.

The probe, comprised of a lander and a rover, touched down at the preselected landing area at 177.6 degrees east longitude and 45.5 degrees south latitude on the far side of the moon at 10:26 a.m. (Beijing Time), the China National Space Administration (CNSA) announced.

With the communication assistance of the relay satellite Queqiao (Magpie Bridge) the probe sent back the first-ever close-up photograph of the moon's far side, opening a new chapter in lunar exploration.

Photo provided by the China National Space Administration on Jan 3, 2019 shows the first image of the moon's far side taken by China's Chang'e-4 probe. (XINHUA)

After the Beijing Aerospace Control Center sent an order at 10:15 am, the Chang'e-4 probe, launched on Dec 8, 2018, began to descend from 15 km above the moon with a variable thrust engine being ignited, said CNSA.

It's an important milestone for China's space exploration

The Chang'e-4's relative velocity to the moon was lowered from 1.7 km per second to close to zero, and the probe's attitude was adjusted at about 6 to 8 km above the lunar surface.

At 100 meters up, the probe hovered to identify obstacles and measured the slopes on the surface. After avoiding the obstacles, it selected a relatively flat area and descended vertically and slowly.

Then the probe landed in the Von Karman Crater in the South Pole-Aitken Basin.

During the descending process, a camera on the probe took photos of the landing area.

"It is a perfect display of human intelligence," said Jia Yang, deputy chief designer of the Chang'e-4 probe, from the China Academy of Space Technology.

The first close-up photo of the moon's far side, taken by a monitoring camera on the lander at 11:40 am, showed the direction the rover would drive on to the lunar surface

After landing, the solar panels and antennas on the probe were unfolded under the control of the space engineers in Beijing through the communication transmission of the relay satellite, which was operating in the halo orbit around the second Lagrangian point of the earth-moon system, about 65,000 km from the moon, where it can see both the earth and the moon's far side.

The first close-up photo of the moon's far side, taken by a monitoring camera on the lander at 11:40 am, showed the direction the rover would drive on to the lunar surface.

The control center in Beijing will choose a proper time to let the rover separate from the lander, according to CNSA.

The Chang'e-4 probe, carrying eight payloads including two developed through international cooperation, will conduct low-frequency radio astronomical observation, survey the terrain and landforms, detect the mineral composition and shallow lunar surface structure and measure the neutron radiation and neutral atoms to study the environment on the far side of the moon, according to CNSA.

The mission provides the world's scientists more opportunities to explore the universe.

Johan Koehler, head of Solar System Science and Space Situational Awareness, Swedish National Space Agency, said the exploration of the far side of the moon was a great achievement by China. "We are very happy to be a part of it."

The moon is tidally locked to earth, rotating at the same rate that it orbits the earth. Therefore, only one side of the moon is seen from earth, leaving the far side a mystery before the age of spacecraft.

For astronomers, the far side of the moon is a place of ideal tranquility, as the body of the moon shields against radio interference from the earth

Many lunar orbiters have shown the moon's two sides are very different: the near side is relatively flat, while the far side is thickly dotted with impact craters of different sizes.

Scientists believe that the lunar crust on the far side is much thicker than the near side. However, the reality is still a mystery, and only on site exploration will reveal the truth.

For astronomers, the far side of the moon is a place of ideal tranquility, as the body of the moon shields against radio interference from the earth. From there, they can study the origins and evolution of stars and galaxies, peering into the dawn of the universe.

The probe also took six live species -- cotton, rapeseed, potato, arabidopsis, fruit fly and yeast -- to the lifeless environment to form a mini biosphere, which is expected to produce the first flower on the moon.

Chinese space engineers also plan to measure temperatures on the surface of the moon from day to night to get first-hand data.

Named after Chinese moon goddess "Chang'e," China's lunar exploration program, which began in 2004, includes orbiting and landing on the moon, and bringing samples back to Earth.

Exploring the far side of the moon is one contribution China is making to the world. Although we still don't know what we might find, this exploration might influence several generations," said Shen Zhenrong, a designer of the lunar rover.

Wu Weiren said: "Exploring the unknown is human nature. The moon is a mysterious world to us. We have a responsibility to explore and to understand it. Exploration of the moon will also deepen our understanding of the earth and ourselves."