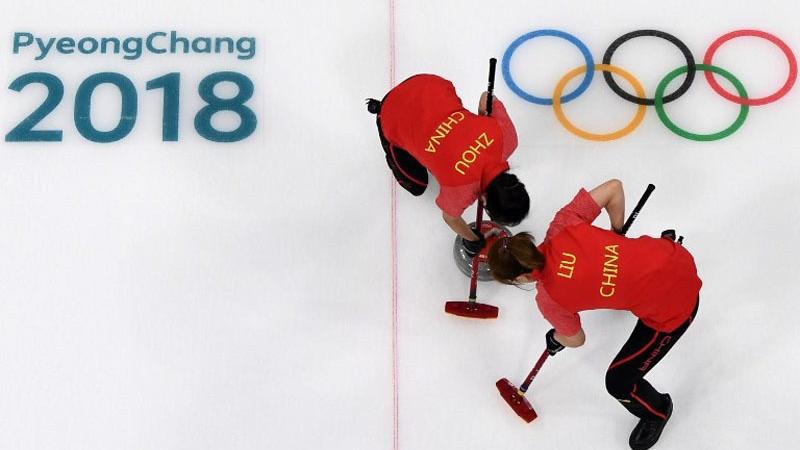 China's Zhou Yan (left) and Liu Jinli brush the ice in front of the stone during the curling women's round robin session between China and Denmark during the Pyeongchang 2018 Winter Olympic Games at the Gangneung Curling Centre in Gangneung on Feb 17, 2018. (FRANCOIS-XIAVIER MARIT / AFP)

PYEONGCHANG - Two four-point winning ends helped China beat Denmark in the round robin session of the women's curling at the PyeongChang Winter Olympics on Saturday evening.

We didn't expect the easy four points in the first end. It was totally because our opponents were not in their best form

China built an unexpected 4-0 lead in the first end by capitalizing on some mistakes of the Danish. But China's advantage didn't last long, as Denmark retrieved one point in the second end, and stole three more points in the third on mistakes of the Chinese side.

The two sides played a see-saw game in the next two ends, with Denmark turning the tide 6-5 after the fifth.

In the sixth end, China chose to give up gaining one point to enter the eighth with the hammer. But the strategy didn't work with Denmark playing strong defense and both sides gained one more point each in the seventh and eighth ends.

The ninth end turned out to be the decisive one, when China, with the hammer once again, gained four points after skipper Wang Bingyu made a couple of great shots.

"We didn't expect the easy four points in the first end. It was totally because our opponents were not in their best form and made some mistakes," said Wang Bingyu after the match.

"But anyway, anything could happen during Olympic Competitions," she added.

She said that after the Danish leveled the score, she and her teammates managed to stay cool and play patiently, and the patience paid off.

"After winning four more pints in the ninth end, we were really relieved. Knowing we were having a three point advantage, we were sure we are going to win," she said.

Ten teams are competing in the women's curling competitions of the PyeongChang Games, with the top four finishers from the round-robin to qualify for the semifinals.