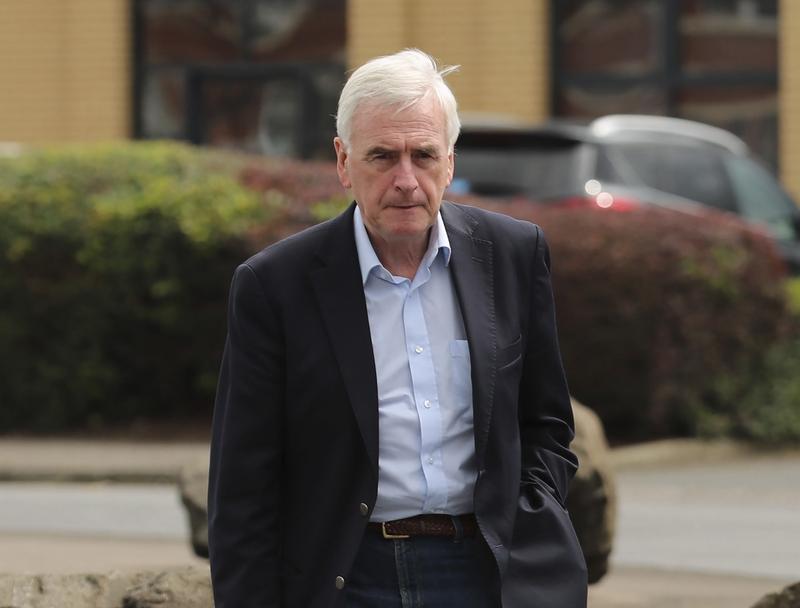 Britain's main opposition Labour Party, shadow chancellor John McDonnell at the Harland and Wolff shipyard where workers have voted to continue their occupation of the shipyard, in Belfast, Northern Ireland, Aug 5, 2019. (LIAM MCBURNEY / PA VIA AP)

BRUSSELS/LONDON — The European Commission said on Monday that the European Union was ready for a no-deal Brexit and that Britain would suffer most under such a scenario.

The Labour Party, which is opposed to a no-deal exit, wants to bring down PM Boris Johnson's govt and form its own emergency coalition under Labour leader Jeremy Corbyn's leadership to delay Brexit

Speaking at a regular daily briefing, Commission spokeswoman Natasha Bertaud said a no-deal UK exit would never be the EU's preferred scenario, adding that the Brussels-based executive saw no need for additional contingency preparations at this stage.

"This will obviously cause significant disruption both for citizens and for businesses and this will have a serious negative economic impact," Bertaud said of any abrupt split.

"That would be proportionally much greater in the United Kingdom than it would be in the EU 27 states."

She cited Commission President Jean-Claude Juncker as having said that if it came to a no-deal Brexit "it is the British who will unfortunately be the biggest losers".

The opposition Labour Party will do everything possible to stop Britain leaving the EU without a deal on October 31, Labour leader Jeremy Corbyn said on Monday.

He urged lawmakers that were "serious" about blocking a no-deal Brexit to vote to bring down the government in a no-confidence vote, and said Labour would form a time-limited government to avoid leaving the EU without a deal. 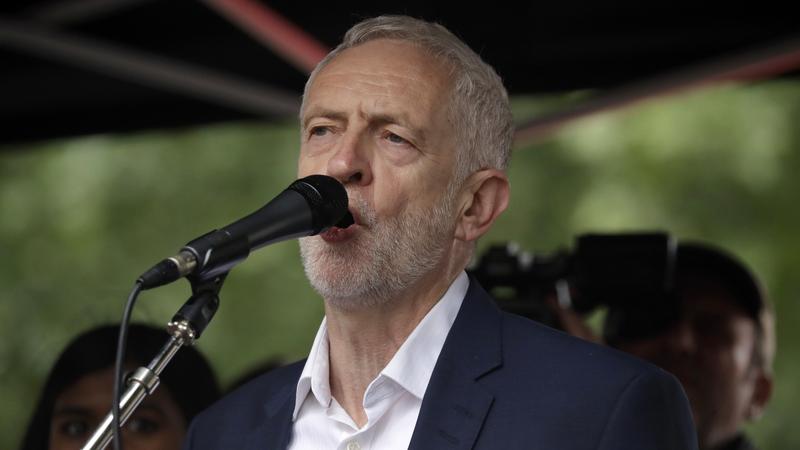 In this June 4, 2019 photo, the leader of Britain's opposition Labour party Jeremy Corbyn makes a speech on stage during a rally on Whitehall in London. (MATT DUNHAM / AP)

"We will do everything necessary to stop a disastrous no-deal, for which this government has no mandate," Corbyn said in a speech in Corby in central England.

In London on Monday, the opposition demanded that the UK parliament be recalled from its summer break to discuss steps to mitigate Brexit disruptions after leaked government documents forecast possible food, fuel and medicine shortages should Britain crash out from the bloc.

"There's a need now to bring MPs (members of parliament) back together again because we need time now to really have a proper debate and discussion about this," McDonnell, a close ally of Corbyn, told BBC radio.

His comments add weight to a demand made on Sunday, signed by more than 100 lawmakers, to recall parliament to discuss what they called a "national emergency".

Parliament is currently not due to sit until Sept 3, when it will reconvene for a short session before breaking up again to allow for annual party conferences. Lawmakers are already fretting that they do not have enough time to try to stop a no-deal Brexit.

Labour, which is opposed to a no-deal exit, wants to bring down Prime Minsiter Boris Johnson's government and form its own emergency coalition under Corbyn's leadership to delay Brexit.

Lawmakers from other parties have dismissed the possibility of Corbyn, a veteran leftist, leading any so-called 'Government of National Unity', preferring either someone else to do the job or else to focus on other parliamentary procedures to block a no-deal.