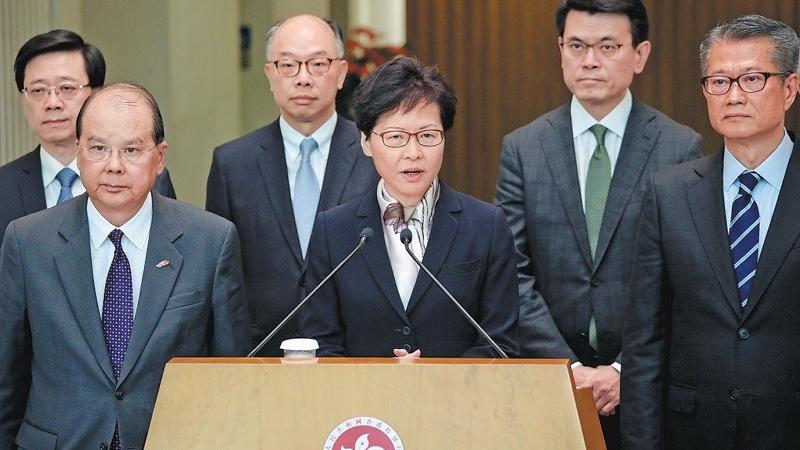 Hong Kong's Chief Executive Carrie Lam Cheng Yuet-ngor speaks at a news conference in Hong Kong on Aug 5, 2019. Lam said recent chaos has pushed the city to the "verge of a dangerous situation", but the government will be resolute in ensuring public order. (PHOTO / CHINA DAILY)

Carrie Lam Cheng Yuet-ngor, Hong Kong’s chief executive, said on Monday that protesters’ sustained acts of disruption are pushing “our city, the city we all love and many helped to build, to the verge of a dangerous situation”.

Lam, speaking at a news conference, pledged resolute action to maintain law and order and restore confidence. She said the protests have gone beyond the nowshelved extradition law amendment bill and now are aimed at destabilizing the special administrative region at the cost of the stability of 7 million residents’ lives and futures.

Lam said the protesters’ actions are a blatant provocation to national sovereignty and challenge the “one country, two systems” principle.

“We all love Hong Kong and have made different contributions to its stability and prosperity over the years. This is the time for us to rally together to set aside differences and bring back order, and say no to chaos and violence,” she said.

We all love Hong Kong and have made different contributions to its stability and prosperity over the years. This is the time for us to rally together to set aside differences and bring back order, and say no to chaos and violence

It will take time for Hong Kong to restore what has been done to its economy, livelihood and the entirety of society, she added.

Financial Secretary Paul Chan Mopo, speaking to reporters, warned that Hong Kong’s economy is in great danger from China-US trade tension, the global economic slowdown and many international variables. Locally, many businesses have been affected. Economic growth was negative in the second quarter, and if things stay the same in the third quarter, Hong Kong will fall into a recession, Chan cautioned.

On Monday, Hua Chunying, a spokeswoman for the Foreign Ministry, said in a statement that violent acts by radical protesters in Hong Kong have crosses the bottom line of a civilized society and endangered the lives of the city’s residents as well as their properties.

Some in the United States ignore such problems as abuse of power by its police officers but arrogantly criticize and smear Hong Kong police officers who perform their duties in a restrained and civilized manner in the face of violent protesters, Hua said. Some US politicians reveal a double standard through their hypocrisy and arrogance, she said.

The ministry again urges the US to stop interfering in the affairs of China’s Hong Kong Special Administrative Region and sabotaging the SAR government’s operation that is based on rule of law, Hua said.

Violent clashes between protesters and police erupted in different districts of Hong Kong on Monday.

Protesters gathered in different locations across the city at around 1 pm. Within an hour, some protestFrom page 1 ers spilled on to nearby roads where they set up makeshift barricades, blocking traffic on some of the major thoroughfares. The police began the dispersal operation in Admiralty, Tai Po, and Wong Tai Sin at around 3 pm.

In the evening, some radical protesters moved on to Sham Shui Po, Sha Tin, Tuen Mun, and North Point and continued the mayhem. They besieged and attacked police stations in these areas and the nearby disciplined services living quarters. Many hurled what believed to be fire bombs and hard objects to the buildings.

At night, radical protesters surrounded the police stations in Sha Tin and Tuen Mun with water filled barriers and fences and set fire to piles of debris which was later put out by firefighters.

The government issued a statement in the early mornign of Tuesday (today), condemning the rapidly escalating violence.

“The protesters' organised acts disregarded the law and order, deprived the right of other members of the public to go to work and carry on their daily lives, and seriously affected economic activities,” reads the statement.

Also on Monday, a group of protesters reprised the act of tearing  down a national flag from a flag pole and throwing it into the sea in Tsim Sha Tsui around 7 pm. The protesters escaped afterwards. The similar act of insulting China’s national symbols have drawn fury from the public on the mainland as well as Hong Kong.