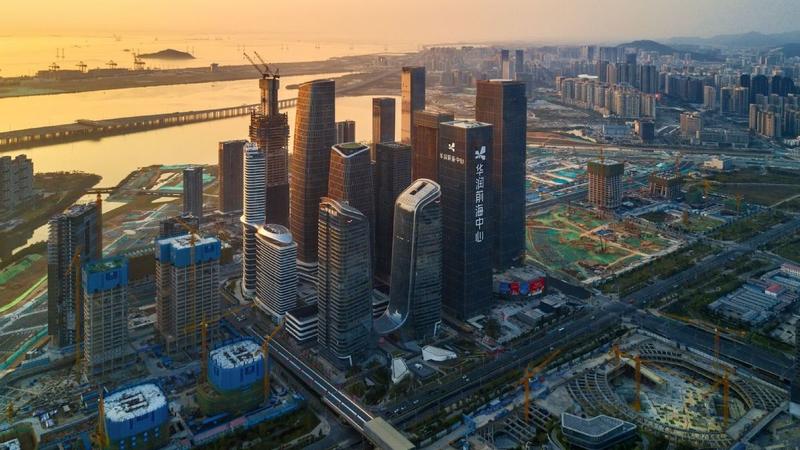 This undated photo shows a view of the Qianhai Special Zone in Shenzhen, Guangdong province. (LIANG XIASHUN / FOR CHINA DAILY)

Many of Hong Kong's young people are embracing a historic opportunity in the Guangdong-Hong Kong-Macao Greater Bay Area, which has become a cradle for startups in particular, thanks to preferential polices, increasing business opportunities and an integrated living environment.

Lei Zi-hou of Hong Kong, who is in his 20s, shifted between several jobs after graduation but failed to find one that could match his major of electronic science and technology.

He started to consider mainland offers in the second half of 2018 and got a job at a software company in Guangzhou, the capital of Guangdong province.

But it was still not his ideal job.

"It has always been my dream to set up my own business," he said. After working cross-border for a while, he now believes an opportunity is emerging for him to realize his dream.

He found that many cities in Guangdong have opened incubators for Hong Kong and Macao entrepreneurs to establish startups - part of measures to implement the nation's plan for developing the Greater Bay Area.

The blueprint, released in February, aims to bolster the integrated development of nine cities in Guangdong with the Hong Kong and Macao special administrative regions. Following the guidelines, detailed measures have been carried out to make it easier for people from Hong Kong and Macao to live and work in the area.

ALSO READ: HK youths must take the ride to a better destiny

For example, the incubator that Lei has chosen in Jiangmen provides rent-free offices and, more important, supervisors to introduce him to local manufacturers and potential business partners, he said.

Besides starting new businesses, some Hong Kong-based companies are expanding to the mainland as business integration increases, and their employees are relocated along with the expansion and decide to stay

He is preparing an application for the incubator on a project involving intelligent household products and is sorting out the supply chain. But he believes his dream is about to come true.

As more people from Hong Kong consider working or starting their own business across the border, some pioneers have become mentors to young entrepreneurs.

Among these pioneers is Chan Sing. In 2015, he took his cross-border e-commerce startup to an incubator in Shenzhen after running into difficulty raising funds in Hong Kong.

He said that at that time it was not easy for an internet-based startup to get sufficient financing due to lack of collateral, given that most of the fundraising channels in Hong Kong were banks.

Within six months, however, he had managed to secure a 50 million yuan (US$7.1 million) investment in Shenzhen.

For the growing number of Hong Kong young people pursuing opportunities in Shenzhen, "the psychological support from a fellow townsman would be especially encouraging," he said.

So he organized an incubator in Shenzhen along with a local district government. More than 40 teams have jumped on board, of which two-thirds are from Hong Kong.

He said financial technology and international trading of the mainland's high-tech products are the two major opportunities for these startups, giving full play to Hong Kong's advantages in finance and professional trading services.

Besides starting new businesses, some Hong Kong-based companies are expanding to the mainland as business integration increases, and their employees are relocated along with the expansion and decide to stay.

Loeng Zi-hin began working in Shenzhen in 2016 when his employer, Hong Kong-based Bielomatik Machinery Co, a provider of automatic manufacturing devices, was entering the mainland market.

"I found the technology industries are more diversified (in Shenzhen)," he said.