HK services sector to get more access to mainland 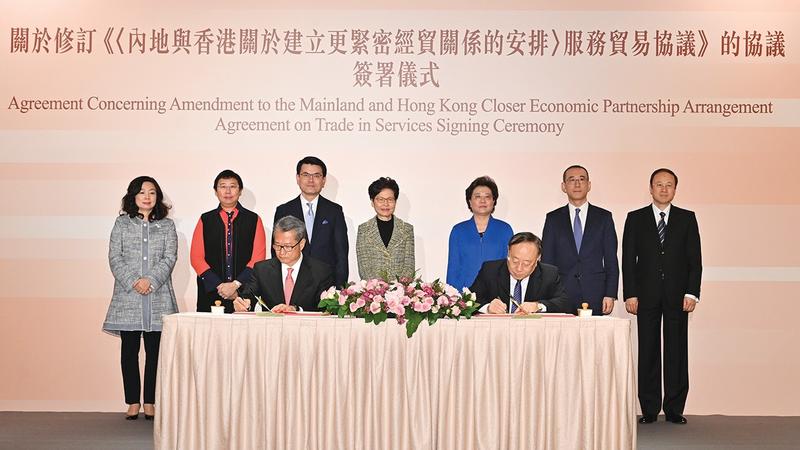 The Chinese mainland will further lower its market access thres­hold for Hong Kong enterprises and professionals, with an agreement to amend the existing Closer Economic Partnership Arrangement on trade in services being signed on Thursday.

Wang said the amendment agreement incorporated appeals and suggestions from services sectors in Hong Kong to make it easier for the special administrative region’s enterprises and professionals to do business on the mainland.

Amid the surge of protectionism and unilateralism around the globe, which has weakened the world’s trading system and hindered economic growth, the agreement showed that the mainland and Hong Kong are determined to propel open markets and liberalization of trade with no fear of storms or tribulations, Chan said.

The CEPA dates from 2003. The agreement to amend it updates later commitments on the liberalization and facilitation of trade in services.

Those commitments, made under the CEPA framework, were part of the agreement on the trade in services implemented in June 2016 in response to the Hong Kong business community’s proposals for more participation in the development of the mainland market.

A number of sectors in Hong Kong’s services industry will benefit from the amendment agreement in such areas as financial services, legal services, construction and related engineering services, and testing and certification, television, motion pictures and tourism services.

Liberalization measures include removing or relaxing restrictions on equity shareholding, capital requirements and business scope in the establishment of enterprises. The qualification requirements for Hong Kong professionals to deliver services on the mainland are being relaxed. It also loosens quantitative and other restrictions for Hong Kong’s exports of services to the mainland market.

In addition, the amendment agreement introduces measures in the nine Pearl River Delta cities of the Guangdong-Hong Kong-Macao Greater Bay Area. The 144-hour visa-exemption transit policy, for example, would be further enhanced through increasing the number of inbound control points and expanding the area where it can be used.

Guo said the amendment agreement takes the Greater Bay Area into consideration, which will elevate the level of openness in the region and allow Hong Kong services professionals to tap into the Bay Area more easily.

The amendment agreement will take effect in June. The CEPA — the first free trade agreement ever concluded by the mainland and Hong Kong — created new business opportunities for the mainland, Hong Kong and foreign investors by opening up huge markets for Hong Kong goods and services.