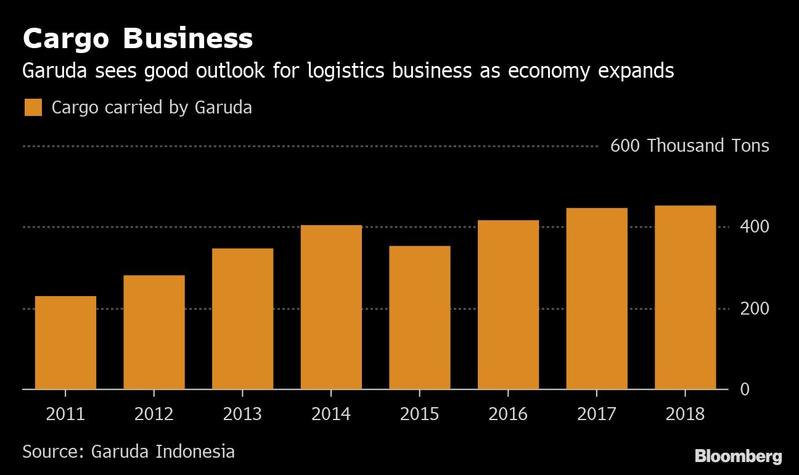 Delivering cargo to the farthest reaches of the world’s biggest archipelago has forever been a challenge. Indonesia’s biggest airline sees a solution in drones.

PT Garuda Indonesia plans to use 100 unmanned aerial vehicles procured from China’s Beihang UAS Technology to ship goods across the nation’s more than 18,000 islands, Director for Cargo and Business Development Mohammad Iqbal said, without disclosing a price. The state-run airline will operate the drones from 30 logistic centers, each with a dedicated airstrip, within five years, he said.

The aircraft, having a wingspan of 18 meters, a range of 1,200 kilometers and a cargo capacity of 2.2 tons, will cost about 30% less than conventional cargo aircraft and will be assembled locally under license from Beihang

“This will totally change the landscape of the logistic industry in Indonesia,” Iqbal said in an interview at the company’s Jakarta headquarters. “The outlook for the cargo business in Indonesia is not just good, but very good.”

Garuda will set up a venture to procure the drones, Iqbal said. The aircraft, having a wingspan of 18 meters, a range of 1,200 kilometers and a cargo capacity of 2.2 tons, will cost about 30% less than conventional cargo aircraft and will be assembled locally under license from Beihang. Another venture will operate the logistic centers and the airstrips.

Indonesia is preparing to spend more than US$400 billion by 2024 to strengthen its infrastructure and retain its lead as a key mining and manufacturing hub in Southeast Asia. The resource-rich nation, the world’s fourth-most populous, will have 25 new airports by 2024, Planning Minister Bambang Brodjonegoro said last month, as part of the government’s Highway in the Sky plan to improve connectivity.

Even on land, the country is planning an unprecedented US$70 billion splurge. By 2024, Indonesia’s toll roads will stretch for 5,400 kilometers, almost triple the length of the current network, Danang Parikesit, head of the country’s toll-road regulator, said last week.

Garuda will conduct trials with three drones in the eastern part of the country starting September until the end of the year. Commercial runs will start early next year in the Maluku islands. The drones will fly seafood to Garuda’s cargo hub in Makassar for onward shipping to Hong Kong and Singapore.

The unmanned aircraft will further aid e-commerce in Southeast Asia’s biggest economy, where the rise of online shopping has boosted demand for logistics and shipping companies. Two of the four Indonesian companies that have reached a US$1 billion valuation without tapping the stock market are online merchants.

Despite massive investments in roads and bridges during President Joko Widodo’s first term, many parts of the country are still inaccessible, particularly the eastern fringes, such as Papua island. The difficult mountainous terrain there makes ground transportation impossible or uneconomical.

Bolstering its cargo operations would also help Garuda cope with falling passenger demand as a result of rising ticket prices, said Fahressi Fahalmesta, an analyst at PT Ciptadana Sekuritas Asia, who has a buy recommendation for Garuda, with a price target of 620 rupiah.

“Cargo revenue has the potential to grow noticeably due to strong demand from the e-commerce business,” Fahalmesta said in a text message. “Employing drones is a clear sign Garuda is paying more attention to improve its cargo revenue.”

Garuda would need government support to operate the drones. Not only would the military-grade machines have to use transmitters to relay their positions and other information, air-traffic controllers would need to be trained to manage the unmanned aircraft.

“We don’t have the infrastructure in place for a drone-delivery ecosystem,” said Gerry Soejatman, an aviation expert in Jakarta. “The government needs to set up the routes, the operational area, as well as the infrastructure to pinpoint their location so the air traffic controllers know where they are.”