'We are one,' says PM Ardern as NZ mourns with prayers, silence 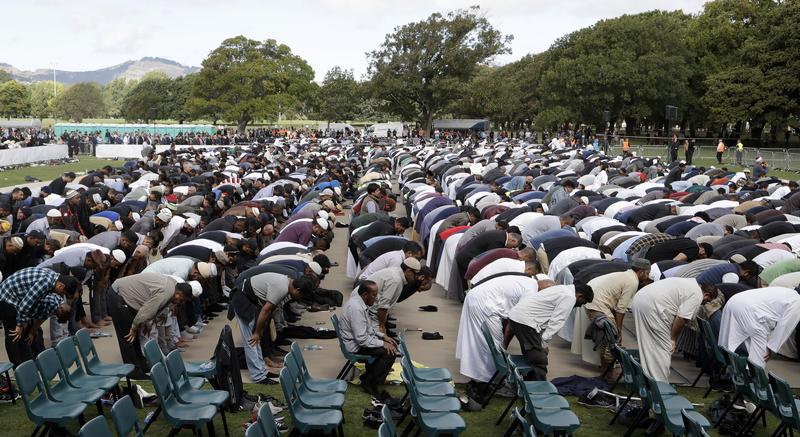 CHRISTCHURCH — The Muslim call to prayer sounded out over Christchurch and around New Zealand on Friday, as thousands gathered to remember the 50 people killed by a lone gunman at two mosques a week ago.

Prime Minister Jacinda Ardern joined about 20,000 people standing quietly at Hagley Park, in front of the Al Noor mosque where most of the victims were killed during Friday prayers last week.

"New Zealand mourns with you. We are one," she said in a short speech, followed by two minutes of silence.

Ardern, who swiftly denounced the shooting as terrorism, has announced a ban on military-style semi-automatic and assault rifles. 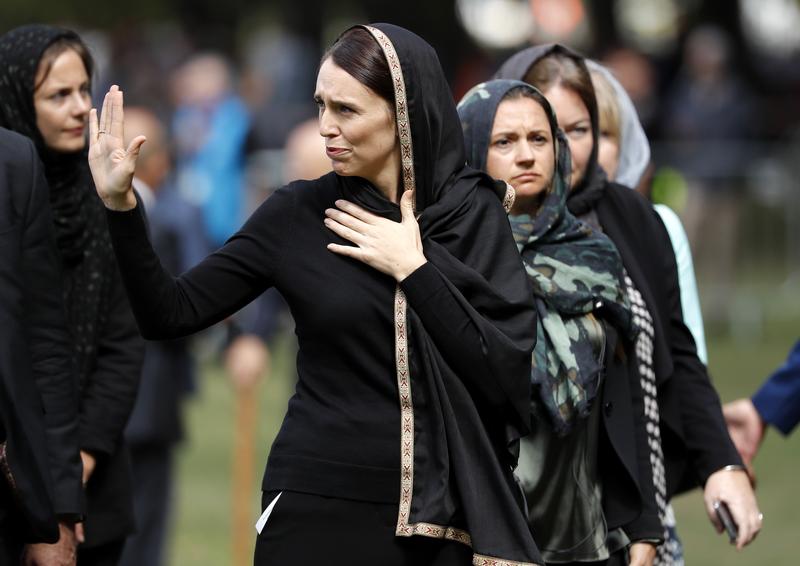 The country is under heightened security alert since the attack, and police said on Friday they were investigating a threat made against Ardern on Twitter.

New Zealand Herald reported that a Twitter post containing a photo of a gun and captioned "You are next" was sent to the prime minister. Reuters could not verify this independently. 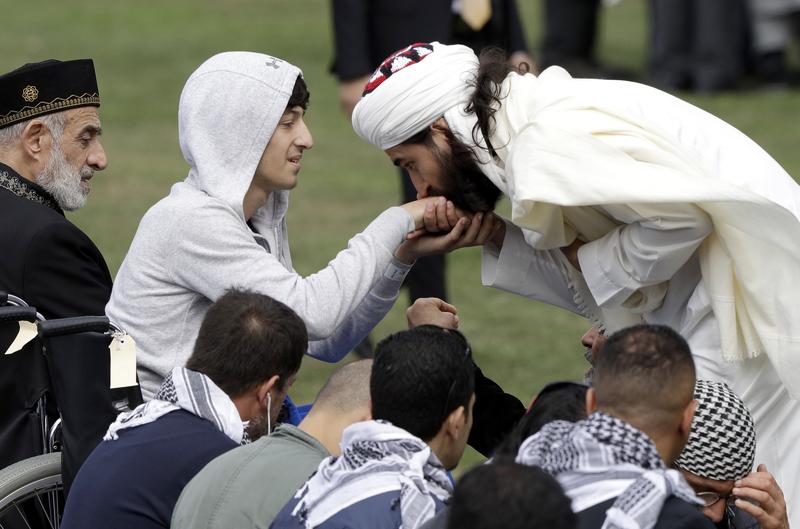 Australian Brenton Tarrant, 28, a suspected white supremacist, has been charged with one murder following the Christchurch attack and was remanded without a plea.

He is due back in court on April 5, when police said he was likely to face more charges.

Most victims of New Zealand's worst mass shooting were migrants or refugees from countries such as Pakistan, India, Malaysia, Indonesia, Turkey, Somalia, Afghanistan and Bangladesh.

"We are broken-hearted, but we are not broken. We are alive, we are together, we are determined to not let anyone divide us," Imam Gamal Fouda told the crowd at the Al Noor mosque, many wearing headscarves in support of the grieving Muslim community. 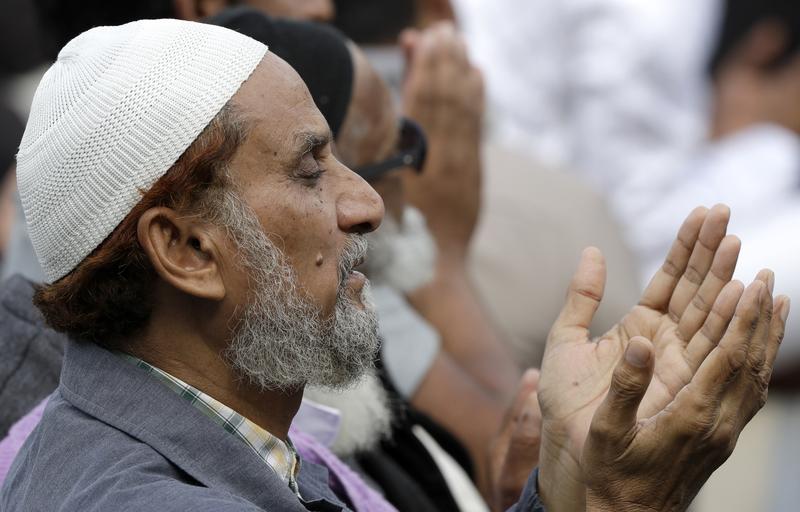 "To the families of the victims, your loved ones did not die in vain. Their blood has watered the seeds of hope," he said in prayers broadcast nationally.

Tens of thousands of people paid their respects around the country with some forming human chains in front of mosques.

Others said silent prayers at schools, cafes and even offices.

Relatives and other mourners thronged into a Christchurch cemetery where 26 victims of the attack, and one person who died in a car crash that was unrelated to the mosque shooting, were laid to rest in a mass burial.

“This is a special janazah. We don’t do these every day," one mourner said over a microphone, referring to an Islamic funeral prayer. 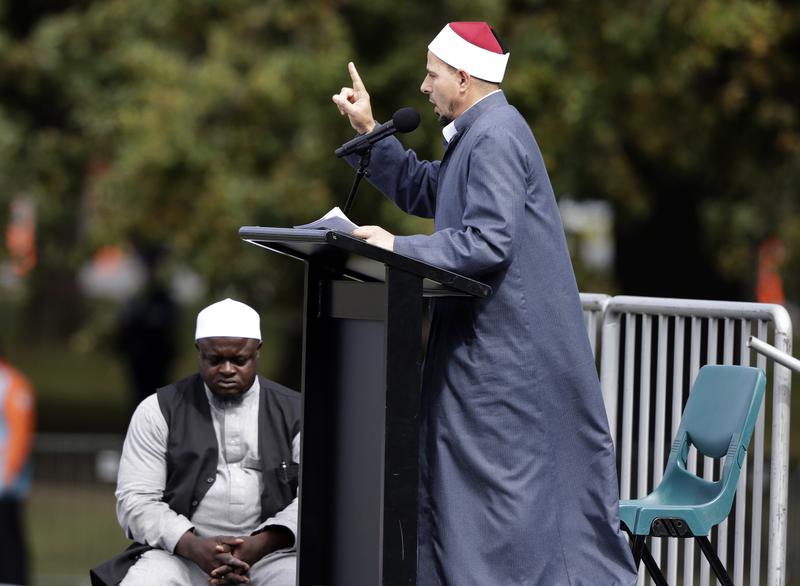 "We don’t bury 27 of our brothers and sisters every day.”

The first to be laid to rest was Naeem Rashid, who was hailed as a hero, killed trying to tackle the gunman at the AlNoor mosque.

Ardern, surrounded by ministers and security officials at Hagley Park, wore a black headscarf and a black suit. Female police at the park also wore headscarves, with a red rose on their uniforms.

In a powerful speech that lasted about 20 minutes, Imam Fouda said through its love and compassion, New Zealand was unbreakable. 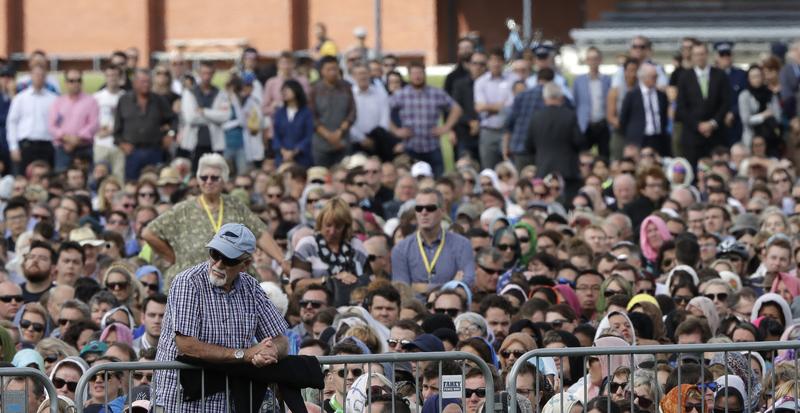 "We are here in our hundreds and thousands unified for one purpose – that hate will be undone, and love will redeem us," he said.

He thanked Ardern for her compassion, saying: "It has been a lesson for world leaders."

Muslims account for just over 1 percent of New Zealand's population. 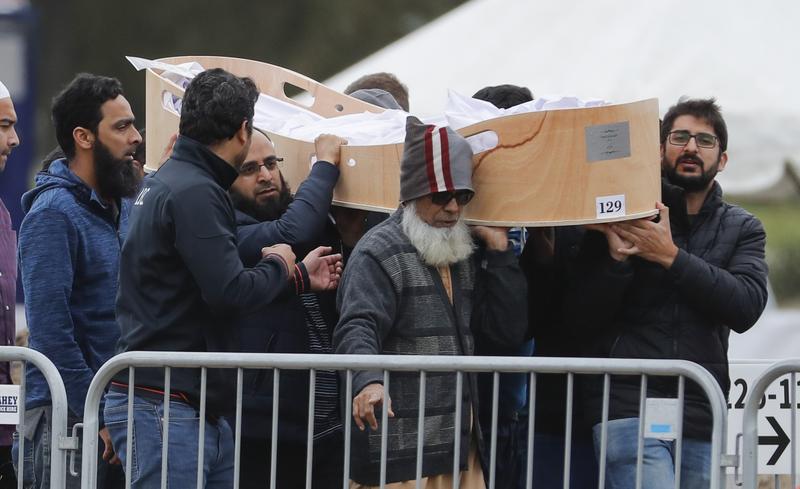 Mourners carry the body of a victim of the mosque shootings for a burial at the Memorial Park Cemetery in Christchurch, New Zealand, March 22, 2019. (VINCENT THIAN / AP)

Many women wore headscarves in New Zealand as a sign of support to the community, and a #headscarfforharmony movement was trending on Twitter.

"We are wearing headscarves showing our support, love and solidarity, and hope that by everybody doing this it will demonstrate to Muslim women ... that they are one with us," said Robyn Molony, 65, with a group of friends wearing headscarves at Hagley Park.

Residents of Christchurch are still recovering from a devastating earthquake that hit in 2011, killing 185 and injuring thousands.

"Since the earthquakes, we’ve gone through a lot as a city and we’re a lot more caring and looking out for one another,” said James Sheehan, 62. 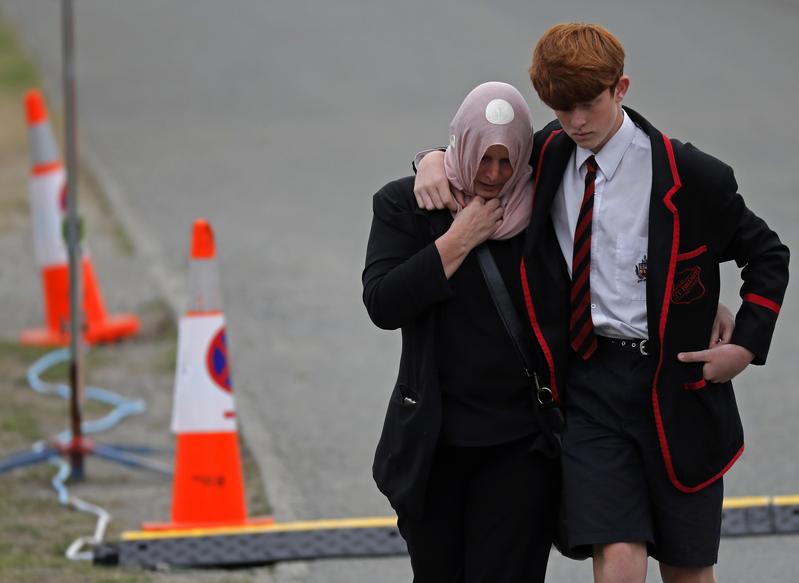 Mourners leave the cemetery after the burial service for a victim of the March 15 mosque shootings at the Memorial Park Cemetery in Christchurch, New Zealand, March 21, 2019. (VINCENT YU / AP) 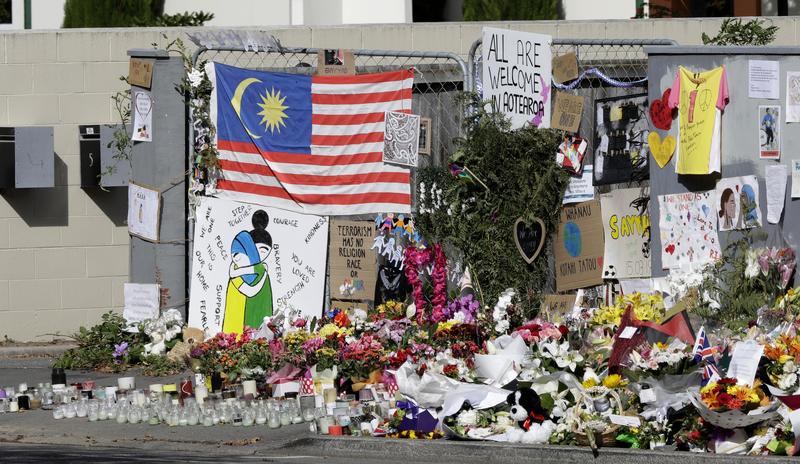