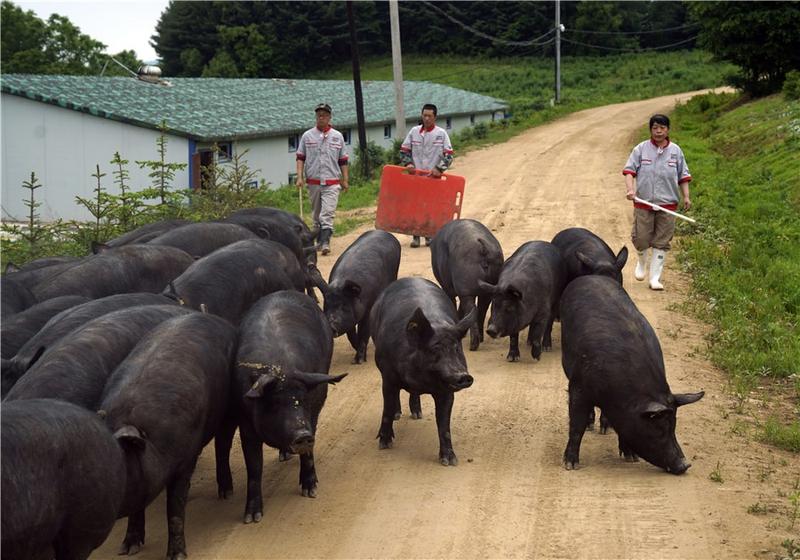 Zhu Guolong, who owns a mid-sized pig farm in Jilin province, had planned to expand his farm as pork prices gradually rose from the summer, but he did not carry out his plan for fear that the African swine fever that has swept some parts of the country may continue to spread.

"I fear that I would lose money if the disease continues to spread even after I expand my farm," said Zhu, who owns the Changchun Topigs Animal Husbandry Co Ltd in Dehui.

"If prices continue to stay at such high levels, I will consider expanding my farm then," he said.

According to the Ministry of Agriculture and Rural Affairs, China's pork prices in surveyed markets averaged 51.22 yuan (US$7.3) per kilogram in the last week of November, the fourth consecutive week of falling prices. In some cities, pork prices peaked at more than 60 yuan per kilogram in October.

Given the expected increases of supply and high base effect, pork prices may decline sharply in the third quarter of 2020

Zhang Ming, Economist of the Institute of World Economics and Politics of the Chinese Academy of Social Sciences

In June, pork prices were only about 20 yuan per kilogram. Then they started to surge and more than doubled in October, pushing the national consumer price index above 3 percent to hit 3.8 percent, and further lifting it to 4.5 percent in November.

Facing the continual and strong spikes in pork prices, the authorities have adopted a slew of policies to increase market supply and encourage hog farming.

Governments at all levels have vowed to support the building of pig farms and fiscal subsidies are given to those who raise pigs.

In Jilin province, for example, the provincial government has provided subsidies and loan interest discounts for raising pigs. It has also encouraged the expansion of insurance coverage for raising of pigs and sows to alleviate risks to farmers and enterprises.

"We will implement relevant policies from the central government," said Lu Guoping, an official of the Jilin Animal Husbandry Bureau.

Imports have been increased to fill the gap in the domestic market. And the authorities have taken out pork reserves to increase market supply and stabilize prices.

Moreover, as China and the United States signed the Phase One trade deal, the country is set to increase imports of pork from the US, which will help increase domestic supply.

"Prices of live pigs hit 40 yuan per kilogram in the wake of the seven-day National Day holiday, the highest level this year," said Wang Dali, head of a pig farm owned and operated by Jilin University in Changchun, Jilin province. However, consumers could not afford such high prices and the demand decreased, leading to price falls, he said. "Even without the government measures to control prices to make pork affordable, prices will drop."

He said the State's release of pork reserves into the market is not on a large scale and cannot satisfy market demand. "But the move sends an important signal to the market: the State will not allow pork prices to continue to rise; then pig farmers will not wait for higher prices and increase sales of pigs, leading to more supply and lower prices," he said.

On Dec 27, 2 million tons of pork reserves were released into the market, the seventh such move this year. Some local governments have also taken similar measures to increase pork supply. China's output of pork amounted to 54 million tons in 2018.

But given the advent of the Lunar New Year, which falls on Jan 25, pork prices may not drop significantly and may even rise moderately during the Spring Festival holiday, analysts said.

Traditionally, demand for pork increases seasonally in the month before Spring Festival, said Zhang Ming, an economist of the Institute of World Economics and Politics of the Chinese Academy of Social Sciences. The rising demand may bring extra pressure on pork prices, although the authorities would also take measures to intervene, he said.

With all these factors taken into consideration, he said, pork prices may hover at high levels until March 2020 and start to moderately fall starting from the second quarter of 2020.

"Given the expected increases of supply and high base effect, pork prices may decline sharply in the third quarter of 2020," he said.

If that happened, China's consumer inflation measured by CPI may peak in the first half of 2020 and fall sharply in the third quarter, which would provide room for China to cut its interest rates to boost growth, Zhang said.

While falls in pork prices, which are expected to happen after the summer of 2020, will benefit consumers and the country's inflation controls and monetary policy maneuvers, they will not be good news for pig farmers.

"For pig farmers, the profit margin is high, but things are not always so promising," said Zhu.

This year, following price rises, profits are on the rise. "But costs are also rising," Zhu said, adding that the salaries of his workers rose by more than 30 percent this year. "As prices rose, there are more investors building new pig farms and they hire new hands, which leads to a shortage of labor."

Although he made a lot of money this year, the profits cannot cover his losses last year, when prices were extremely low, Zhu said, adding that if the current high prices continue, his profits would cover losses by January 2020. "We sold live pigs at about 6 yuan per kilogram at the lowest level last year and the more we sold, the more losses we suffered."

Before this round of pork price surges, China's pork prices had flattened out at low levels for more than two years and farmers were forced to reduce the scale of hog raising because it was not profitable.

"This round of pork price rises has also come from external factors that pig farmers and enterprises cannot control," said Zhang, referring to the spread of African swine fever and the environmental control policies by some local governments. "The combination of the two factors has led to sharp decreases in the numbers of pigs and sows."

As African swine fever spreads, pig farmers and enterprises have become more alert and taken measures to prevent it.

READ MORE: Pork shortages set to ease by next year

"The government, industrial associations and ourselves have taken time to learn how to control the spread of the disease and now we are more experienced and more capable, both in terms of methodology and equipment, to control it," said Wang of the Jilin University pig farm.

Wang said his farm has increased frequency of disinfection and keeps more disinfection equipment in store so that the procedure will not be interrupted by dysfunctional equipment.

Many newly built pig farms have had equipment, such as that used for ventilation and automatic dung clearing, installed so that the improved living environment would help improve the immune systems of the pigs to help prevent infection, Wang said.

Some local governments that had forbidden pig raising in the name of environmental protection, meanwhile, are revising their policies, Zhang of the CASS said.