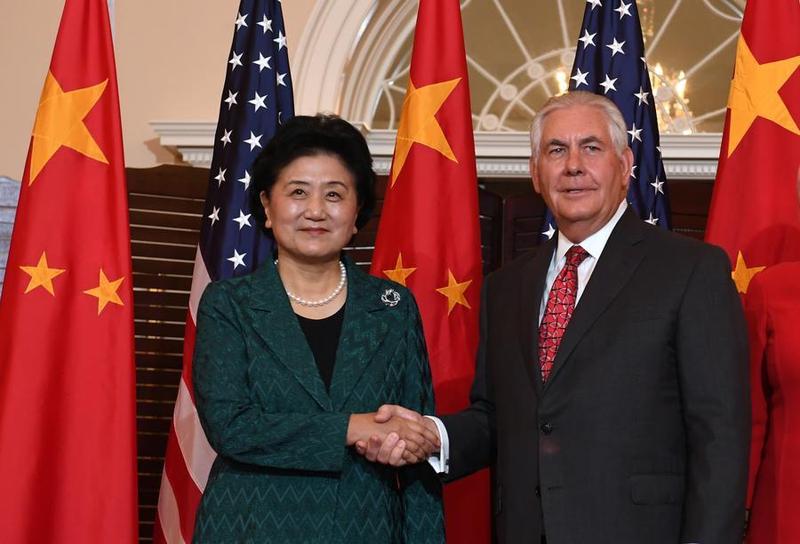 WASHINGTON - China and the United States held the first round of the bilateral Social and People-to-People Dialogue in the US capital on Thursday.

The dialogue was co-chaired by Chinese Vice Premier Liu Yandong and US Secretary of State Rex Tillerson.

Under new circumstances, strengthening people-to-people exchanges is vital to the sound and stable development of bilateral relations, Liu added.

The dialogue is one of the four high-level dialogues established during the Mar-a-Lago meeting between Chinese President Xi Jinping and US President Donald Trump in Florida in April.

The two sides should implement the consensus reached by Xi and Trump, raising the people-to-people exchanges and cooperation to a new level, so as to lay a firm social foundation for the development of bilateral relations, Liu said.

To ensure stable and long-term people-to-people exchanges, Liu proposed that the two sides focus on the development of their relations in the next 50 years.

The first round of the China-US Social and People-to-People Dialogue resulted in a joint statement and an action plan which includes more than 130 outcomes.

According to the statement, China and the US will team up for global health progress, boost cultural exchanges, encourage more bilateral educational exchanges and push for renewal of sci-tech cooperation.

According to the dialogue's action plan, China and the United States will take into account proposals of the Beijing-led Belt and Road Initiative to deepen cooperation for safety, progress and innovation in health matters for both sides and the rest of the world, and commit themselves to building a community of shared destiny where health matters are concerned.

The two partners also agreed to launch cooperative programs to prevent and control such major communicable diseases as AIDS, promote exchanges and dialogue between health personnel at various levels, and boost health research on such non-infectious diseases as cardiovascular and cerebrovascular diseases as well as cancer.

According to the action plan, the two sides will adopt a "double 100,000" two-way overseas study plan, which will allow China to send 100,000 government-sponsored people to study in the United States and permit 100,000 US students to study in China in the following four years.

Besides, China will provide 10,000 scholarships in the coming four years to encourage excellent US students to study in China on a short-term basis, according to the plan.

The United States will continue to implement the Fulbright scholarship program, a US flagship academic exchange program.

The action plan said China and the United States are committed to concertedly pushing forward the renewal of the China-US Science and Technology Cooperation Agreement.

The scientific and technological cooperation between the two partners dated back to 1979 when they signed the S&T Agreement, under which the two countries have since reached nearly 50 inter-agency agreements and jointly supported thousands of cooperative programs.

EXCHANGE AT ALL LEVELS

China and the United States will help promote bilateral cooperation between public cultural industries, as well as exchange visits among high-level cultural groups.

The statement also mentioned that exchanges and cooperation at local levels are one of the most active and robust areas in China-US relations, which indicates that the commonalities between the two countries far outweigh their differences.

READ MORE: 'China, US have least discord on people-to-people exchanges'