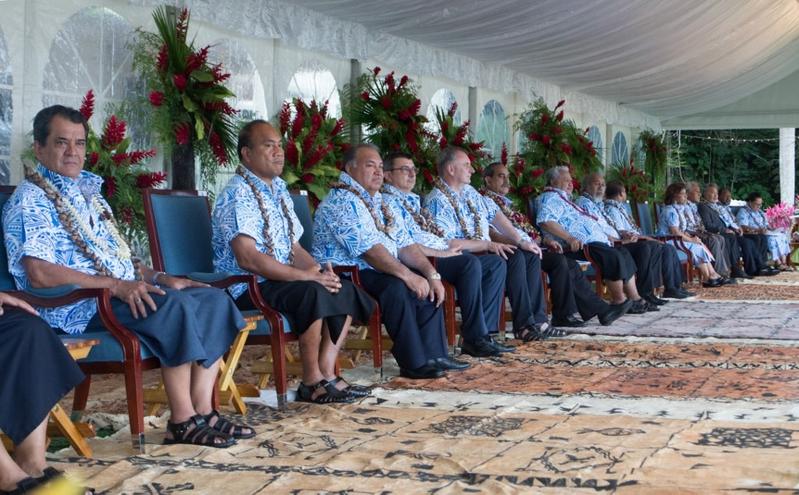 Pacific Island leaders attend the opening ceremony of the 48th Pacific Islands Forum in Apia, Samoa on Sept 5, 2017. Pacific Islands leaders began negotiations over climate change and other policies at an annual summit on Aug 15, 2019, talks that will test Australia's relationship with the region as it refuses to embrace tougher emission reduction targets. (KENI LESA / AFP)

FUNAFUTI, Tuvalu - Pacific Islands leaders began negotiations over climate change and other policies at an annual summit on Thursday, talks that will test Australia's relationship with the region as it refuses to embrace tougher emission reduction targets.

Negotiations among leaders from the 18-member Pacific Islands Forum in Tuvalu are expected to be protracted after Australian Prime Minister Scott Morrison signalled he would not accept climate targets sought by other countries.

It would be symbolic, it would be very unfortunate

"It would be symbolic, it would be very unfortunate," Tuvalu Prime Minister Enele Sopoaga told Reuters of any potential Australian blocking of tougher climate targets.

Many Pacific islands are pressing for the region to embrace limiting global temperature rises to no more than 1.5 degrees Celsius (2.7 degrees Fahrenheit) above pre-industrial levels and an immediate end to coal mining.

Australia, which has a large coal mining industry, opposes the proposal. New Zealand Prime Minister Jacinda Ardern said on Wednesday that Canberra would have to "answer to the Pacific".

The low-lying Pacific islands are on the frontline of global climate change, battling rising sea levels and related crises that have forced some residents to move to higher ground.

Australia has historically enjoyed significant sway in the Pacific, but it has been challenged in recent years.

Morrison is a firm supporter of the coal industry, and his strong backing of a large coal mine planned for the state of Queensland by was seen as a key factor in his government's surprise re-election at polls in May.

In 2016 Australia signed the Paris Agreement that commits signatories to policies that limit temperature increases to no more than 2 degrees Celsius. Morrison has said Australia will meet its climate change commitments.

Seeking to improve its credentials in the Pacific, Australia this week offered A$500 million (US$337 million) to the region to invest in renewables and prepare for the impacts of climate change, although leaders said that was not enough.