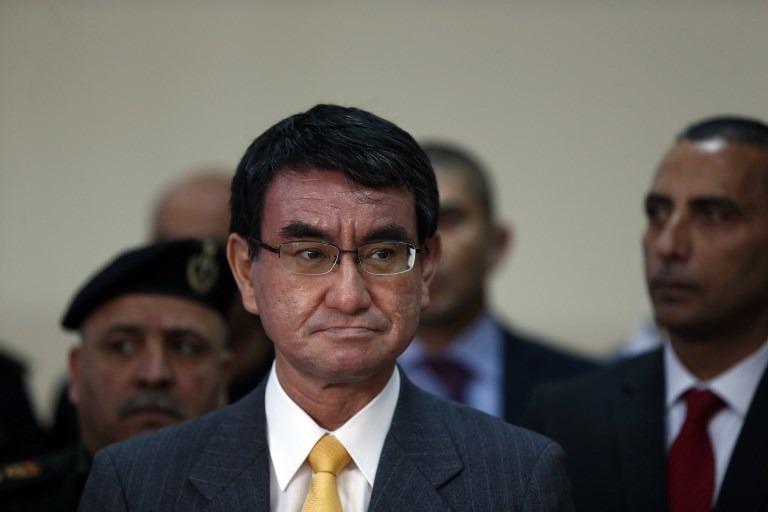 Japanese Foreign Minister Taro Kono is shown a scale model during the unveilling of the second phase of the Jericho Agro Industrial park in the West Bank city of Jericho on Dec 26, 2017. (AHMAD GHARABLI / AFP)

TOKYO - Japanese Foreign Minister Taro Kono said Friday that he hopes Japan and China could further enhance mutual trust and steadily develop the relationship of friendly cooperation based on the overall interests, as this year marks the 40th anniversary of the signing of the China-Japan Treaty of Peace and Friendship.

Kono made the remarks in a written interview with Chinese media ahead of his trip to China on Saturday, which will mark his first visit to the country since he took the current portfolio.

Kono said he hopes his visit at the beginning of this year would be a good start for bilateral relationship.

"I'm willing to promote cooperation and communication between Japan and China in all areas while properly addressing outstanding problems, to further enhance mutual trust and steadily develop bilateral relationship of friendly cooperation based on the concept of strategic and mutually beneficial relations," he said.

Noting that this year also marks the 40th anniversary of China's reform and opening up, Kono said over the past 40 years, China has made great achievements and the extensive cooperation between China and Japan has also made much progress.

The total trade value between China and Japan, which was some US$5 billion 40 years ago, now stands at 60 times of that amount, while the trade interdependence between the two countries deepens, he added.

As the world's second and third largest economies respectively, China and Japan have great responsibility for promoting world peace, stability and prosperity, and improving bilateral relationship is in the interests of not only the two countries, but also the whole international community, he said.

He said the bilateral relationship showed momentum of improvement last year when the two countries marked the 45th anniversary of the normalization of bilateral ties.

Regarding cooperation under the China-proposed Belt and Road Initiative, Kono said Japan and China cooperating to address the immense needs for infrastructure in Asia would bring great benefits to the economy of both countries as well as to the prosperity of Asia.

He hoped that during his first visit to China as foreign minister, he would be able to discuss with Chinese officials, including Foreign Minister Wang Yi, the ways to improve bilateral ties, including promoting high-level exchanges.