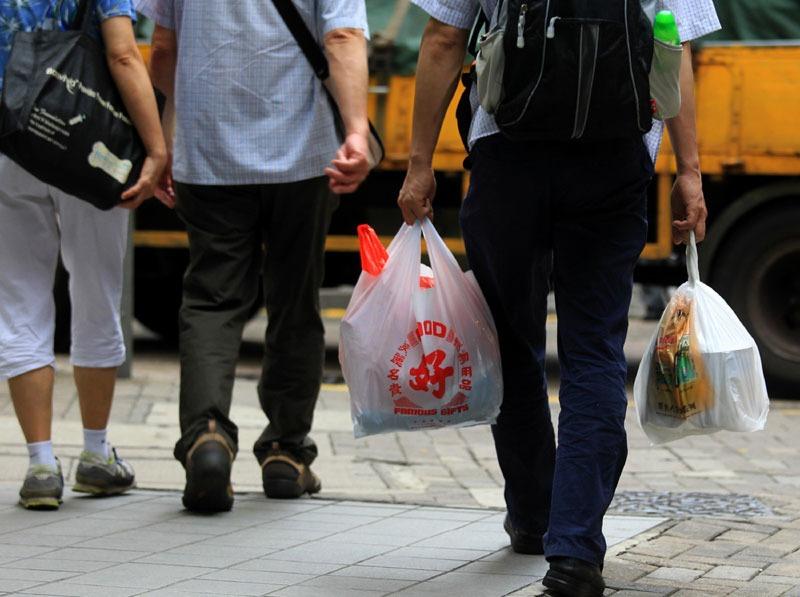 As the Chinese mainland steps up its fight against plastic pollution, Taiwan plans a major ban on the material by 2030, Hong Kong moves to tackle solid waste from the source via an environmental levy on plastic bags and Macao weighs a similar fee through legislation.

Like the Chinese mainland, Hong Kong, Macao and Taiwan have also taken measures to tackle the challenges posed by plastics waste.

Taiwan plans to ban plastic altogether by 2030 while Hong Kong has implemented an environmental levy on plastic bags since 2015. Macao too is considering a similar levy through legislation.

Starting from this year, express delivery companies in the Chinese mainland are following guidelines published by the State Post Bureau in December to reduce the generation of waste and improve recycling and green packaging.

Under the guidelines, large bags used in parcel transportation should be reused at least 20 times. Green packaging materials should also be given priority. The move could save 5.5 billion packages a year, among other benefits, according to a report by the China Post Express News.

The Chinese mainland’s efforts to tackle the plastics scourge go back many years.

In fact, last year marked the 10th year since the Chinese mainland banned free plastic bags. Between 2008 and 2016, the campaign had cut the number of plastic bags consumed in large stores and supermarkets by two thirds, which is equivalent to reducing the consumption by 1.4 million tons and carbon dioxide emissions by 30 million tons, according to Xinhua, citing the National Development and Reform Commission (NDRC).

But challenges remain. According to a 2018 survey by the China Zero Waste Alliance, a non-profit group that aims to help solve the country’s waste crisis, only 3.7 percent of retailers strictly abide by the restrictions through correct notices, using plastic bags with required thickness and charging for plastic bags.

Meanwhile, the rapid development of e-commerce and food delivery services creates unprecedented pressure on the environment. In 2016, the express delivery industry used 14.7 billion plastic bags and 330 million rolls of packing tapes, according to data from the State Post Bureau.

In 2016, the number of plastic bags directly used by express delivery companies was 68 billion, down 17.76 percent from 2015

But the industry, from package producers to ecommerce platforms, has been working proactively to reduce the use of plastic items. For instance, in 2016, the number of plastic bags directly used by express delivery companies was 68 billion, down 17.76 percent from 2015.

In January, 2018, NDRC said it is working on new measures regarding the prevention and management of plastic waste, including extensive restriction on emerging industries such as ecommerce and food delivery, alternative products that are recyclable and biodegradable, as well as strengthening law enforcement.

Provincial and municipal governments are also stepping up to take specific measures to deal with local problems. Take Hainan province as an example, its Department of Ecology and Environment drafted a plan in December for public consultation, with an aim to fully ban the production, sales and use of single-use and non-degradable plastic items by 2025.

In Hong Kong, plastic waste is the third-largest component of municipal solid waste, accounting for 20 percent of the total, according to 2017 statistics from the city’s Environmental Protection Department. Every day, a total of 2,124 tons of plastic waste is disposed of in Hong Kong, while only 13 percent is recycled. 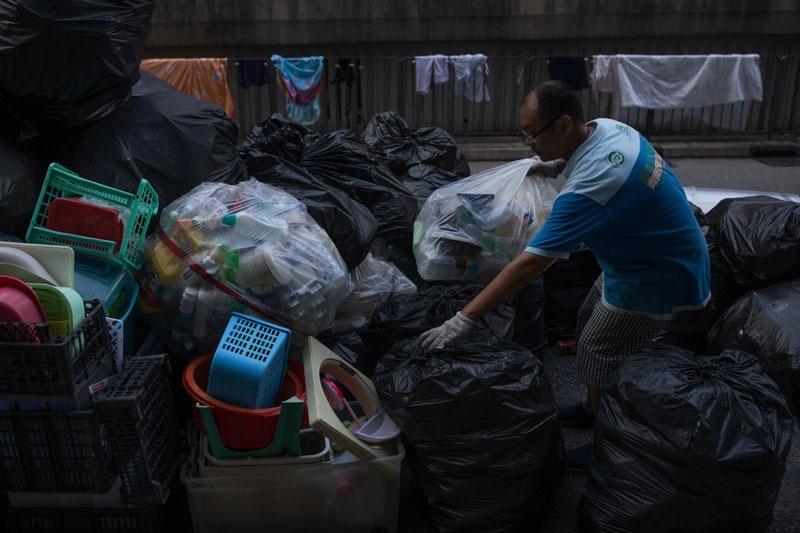 “The local landfill is one way plastic waste is disposed of,” said Greenpeace campaigner Chan Hall-sion. “However, if being discarded improperly, the waste will end up in the sea or other natural environments. In recent years, the amount of plastic waste in these areas has been rising, making it an increasingly serious problem for the environment.”

Every day, a total of 2,124 tons of plastic waste is disposed of in Hong Kong, while only 13 percent is recycled

According to a survey by the environmental protection group, it is estimated that over 17.5 million pieces of plastic waste enter the ocean every year from Shing Mun River, a main waterway in Hong Kong.

Plastic bags are the biggest contributor of plastic waste, followed by plastic bottles and plastic dining wares, according to official statistics. Since 2015, retailers are required to collect from customers an environmental levy of no less than 50 cents (7 US cents) for a plastic bag.

But Chan feels the impact of such a restriction is quite limited. In addition, free plastic bags are still being offered to consumers for some purchases, such as frozen foods.

The local government can also take lessons from around the region, said Chan. “Taiwan is a very good example as the government has announced that it will ban all plastics.”

Taiwan has been restricting the use of plastic items since 2002 and is planning a comprehensive ban on single-use plastic items, including shopping bags, cutleries, straws and cups, by 2030, according to the government’s Environmental Protection Administration, or EPA.

EPA data showed that the use of plastic shopping bags in major businesses in Taiwan has been reduced by 58 percent, with the annual consumption rate dropping from 3.4 billion to 1.4 billion pieces.

There are many beverage shops in Taiwan. Since the shops are mostly small, many of them only offer take-out services, which generate a large number of disposable cups

“There are many beverage shops in Taiwan. Since the shops are mostly small, many of them only offer take-out services, which generate a large number of disposable cups,” said Hsieh. “The cups are usually made with polystyrene, polypropylene, paper or other compound materials, so the recycling rate is often very low (due to their low cost).”

Hsieh hopes more innovative measures will be taken, including the banning of plastic straws for in-store customers, the adoption of eatable straws, and the provision of shared cleaning services.

Plastics are also a major component of municipal solid waste in Macao, accounting for 23 percent of the city’s total. However, unlike Hong Kong and Taiwan charging for plastic bags, Macao does not, and the local government is working to reduce plastic bag usage through education and promotional events.

A recent example is a campaign called Reducing Plastic is Very Easy launched by the Macao Environmental Protection Bureau (DSPA). Through the campaign, the government encourages citizens to reduce the use of disposable cutlery, and rewards them with environmental-friendly tableware.

Ho Wai Tim, president of Macau Ecological Society, said the city lacks legal support to restrict the use of plastic bags. The Macao government is also working on a new law, but the discussion has been ongoing for years. The DSPA was only established in 2009.

“In Macao, the main method to deal with plastic waste is incineration, but this generates carcinogenic substances, such as dioxins. When those substances are emitted to the air, they are harmful to people living nearby,” said Ho, adding that the recycling rate of plastic waste in Macao is also very low.

According to the Report on the State of the Environment of Macao in 2017, the disposal quantity of municipal solid waste in Macao continues to rise, with plastics accounting for 23 percent of the total.

“For example, if Macao consumes 50 million plastic bags per year now, there should be a specific timeline for when we are going to reduce the number to 30 million and gradually to 10 million,” said Ho.

Chan from Greenpeace said the Chinese mainland’s ban on plastic waste imports has greatly affected the management and recycling of plastic waste in Hong Kong, since it used to be a key destination for the city to dispose of its waste.

The Hong Kong government said a pilot program will be launched this year to provide free plastic waste recycling, and Chan hopes more detailed measures will be released soon.

“We need to focus on local issues,” said Chan. “And we need to do that from the source.”