By Robert Blain in Melbourne 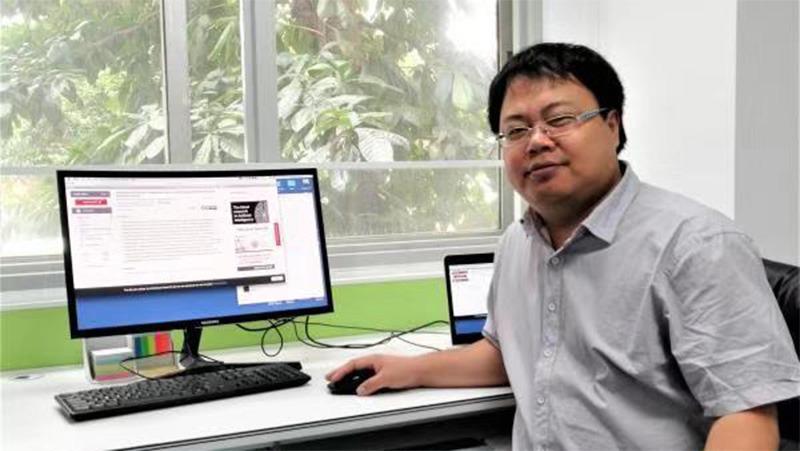 Events from a young age shaped the way Zhongfang Wang looked at the world and compelled him to make a difference. Driven by seeing the distress of a close family member, he was determined to study medicine as a way to benefit mankind.

“My father has chronic obstructive pulmonary diseases and suffered a lot many years ago. Therefore, I had dreamed of being a doctor to help him since I was very young,” says Wang.

His initial plans, however, did not unfold as he had hoped.

“Unfortunately, after my university entrance examination, I was allocated to the laboratory medicine department under the public health faculty. In fact, I was very frustrated when I heard I could not study medicine,” explains Wang.

Undaunted by the setback of being unable to undertake his lifelong dream, he was still found a way to make a difference in global healthcare – through his pursuit of the understanding and ways to fight emerging viral diseases. His research into influenza, in particular the H7N9 (so-called bird flu) virus, has been significant.

It is a career choice that has taken him further than he could have ever imagined.

Born in Zhucheng, Shandong Province, in the north of China, Wang began his early tertiary education at the prestigious Peking Union Medical College.

A pivotal moment occurred in Wang’s career in 1999.

“I attended a seminar which showed how the B subtype rotovirus (affecting mostly babies and young children) was isolated and recognized by Professor Hong Tao in China in the 1980s – it really attracted me how scientists could help in public health.”

Spurred by his growing interest in this area of research, Wang completed a PhD at Giessen University, Germany in 2010 to examine how a virus gains its virulence against its host. He followed this up with post-doctorate work at Ghent University in the Netherlands.

Then, in 2012, Wang came to Australia to work at thePeter Doherty Institute of Infection and Immunity, affiliated with theUniversity of Melbourne. This was shortly before the outbreak of the H7N9 bird flu virus ¬– which first appeared in Shanghai in 2013. Wang was quickly able to put his growing expertise in this area of virology to good use.

When the initial outbreak of the H7N9 virus occurred, he discussed the situation with his supervisor, Professor Katherine Kedizerska.

“She encouraged me to contact Chinese collaborators to do some research in human immunity against H7N9. My previous research experience in virology, laboratory medicine and immunology, really helped me a lot to push the H7N9 study forward.”

Acting on this advice, Wang began working with scientists at Fudan University’s Shanghai Public Health Clinical Centre. It proved to be a very fruitful partnership, leading to several potentially life-saving discoveries relating to the bird flu virus – such as identifying that immunity to the H7N9 virus was given by a particular type of white blood cell.

In conjunction with Professor Kedizerska, Wang has played a key role in establishing a long-term collaboration between Fudan and Melbourne.

One of Wang’s key breakthroughs (through his collaboration with Fudan University) was the identification of a genetic marker that helped predict the severity of the H7N9 virus in a particular individual. Significantly for the region, the genotype which carries this genetic marker is quite common in Asian populations. In this way, individuals at higher risk can be identified, vaccinated and, if necessary, treated in a timely manner.

“If they get infected, hospital staff should also be aware that those people’s condition could progress rapidly, and do some preparatory management,” says Wang.

In this way, the severity of disease in the sufferer can be reduced, possibly even saving their life. According to the World Health Organization, the mortality rate of someone contracting the H7N9 virus is about 30 percent.

The early warning sign of the genetic marker predicting an individual’s susceptibility to bird flu could one day deliver a massive benefit in mankind in reducing the mortality rate, and save many lives with timely treatment, if bird flu ever becomes a full-blown pandemic – a possibility scientists cannot rule out.

Wang points out that as nasty as the so-called bird flu virus is, it currently is not as big a threat as the SARS (severe acute respiratory syndrome) virus was – due to the highly infectious nature of SARS.

“H7N9 is still limited in human-to-human transmission, therefore it only puts a potential pandemic threat to people. It is less severe than SARS, which can spread easily among people by air droplets, and could cause severe acute respiratory syndrome,” says Wang.

The SARS virus first appeared in southern China in late 2002. Once the outbreak spread to Hong Kong, it quickly jumped to major cities across the globe in the first half of 2003 before being contained later that year.

Wang believes that the lessons learned from the SARS outbreak have helped fight subsequent viral outbreaks, such as H7N9.

“We have improved a lot since the 2003 SARS outbreak,” he explains.

And nowhere have measures been implemented with greater intent than China.

“In the 10 years since the SARS outbreak, China has successfully built a quick-response disease control network against infectious diseases, in counties, cities and provinces. Local centers for disease control have been set up across China, as well as diagnosis and research platforms, (which) are quite very well established at a national and university level.”

Wang explained that after the SARS outbreak, China’s government put great effort into establishing a preparation system against infectious diseases. He added that the system worked effectively and efficiently in combating H7N9.

“For example, the pathogen was recognized quickly, the public was informed immediately, the government’s response network was initiated efficiently and effectively, including free therapy against H7N9. Live poultry markets were closed too.”

With the initial outbreak of bird flu, patients infected with the virus attended hospital in Shanghai and were diagnosed and confirmed within 24 hours.

“Government, CDC (Centers for Disease Control) and hospital initiated the responsive network quickly including free treatment and closing live poultry markets. Therefore, in my view, SARS was a lesson – and we learned to fight against H7N9 successfully.”

He adds that the ease of international travel can exacerbate the threat of viruses.

“With the globalization of travel and trade, which causes geographic mobility (approximately 2.1 billion air passengers travel annually), the SARS outbreak warned us we are living in a small world where there are no borders when facing emerging infectious diseases.”

Wang explains that it essential that governments, world health organizations, private sectors, scientists, and researchers should work together to formulate a global strategy.

“This was practiced very well in Africa (during the) Ebola outbreak in 2014-2015 – the global outbreak alert and response network was established and acted effectively.

Wang has recently undertaken a new challenge at the Guangzhou Medical University (GMU) – as a professor and Principal Investigator at the State Key Laboratory of Respiratory Disease. He hopes that his extensive experience and international research into emerging infectious diseases can make him an asset in his new role.

“The combination of fundamental research and medical study, the vigorousness of the working atmosphere around talented scientists, the diversity of respiratory diseases they are working on, all of these draw me to take the position at GMU.”

He adds: “After a few years working in the flu and flu immunology area, I realized how important it is to get involved on the first line when an outbreak happens, and to get first-hand material to understand the disease correctly and in a timely (manner).”

Wang said that in the past century, Guangdong has become something of a hotbed for the outbreak of viral diseases –such as the 1977 flu pandemic – with the potential to create a significant threat to public health.

He adds the State Key Laboratory of Respiratory Disease is well recognized in the field and has earned its reputation through combating emerging infectious diseases since 2003.

“It has the best doctors in China, who specialize in respiratory diseases, along with an excellent platform for diagnosis and therapy,” says Wang.

A key aspect of the ongoing good work that Wang is his continued collaboration with immunologists at the University of Melbourne. He returns to Melbourne on a regular basis to confer with them. His experience in Australia has been invaluable in putting together his own team in Guangzhou. Wang believes that collaboration between doctors and scientists is crucial in continuing to make progress in his field.

“Ways of thinking and behaving are quite different between working in laboratories and in medical practice. Scientists generally draw attention to the theoretical details such as cellular and organic mechanisms, while doctors tend to consider the human body as a whole – concerned whether it can bring benefits to the patients and how we can do better to fight the infections in the big picture.”

Wang adds that collaboration between fundamental research and medical practices can definitely help to understand the diseases and pathogens quickly and accurately – especially for new emerging diseases.

“For example, during the SARS outbreak, it was the laboratory identifying and confirming the new pathogen as (the) SARS coronavirus, which gave the doctors completely different therapeutic guidelines.”

Although now based in Guangzhou, Wang remains in close collaboration with the Australian researchers at the Peter Doherty Institute – due in part to funding from the Australia-China Science and Research Group Mission.

Speculation remains that the world is due for another deadly viral pandemic – such as the Spanish Flu that swept the globe 100 hundred years ago.

“Historically, it is quite true that every 30-40 years, there is a pandemic caused by flu. Luckily, compared to the 1977 pandemic – with one million deaths – the 2009 H1N1 (swine flu) pandemic was mild. However, due to global movement, some local epidemics may become global problems.

“In the meantime, the antibiotic resistance problem becomes even more urgent. Therefore, we should admit that some potential pandemic threats are imminent, and the world should always have it in mind as well as have a preparedness plan ready.”

And with Wang’s dedication and commitment to the cause, the world can perhaps breathe a little a little easier.