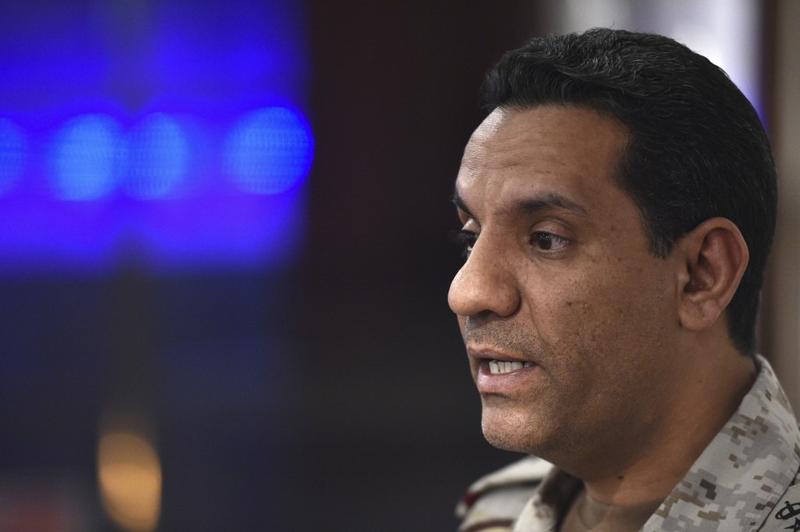 Spokesman of the Saudi-led military coalition Colonel Turki Al-Maliki talks during an interview in the capital Riyadh, on May 21, 2019. (FAYEZ NURELDINE / AFP)

DUBAI, United Arab Emirates — Saudi Arabia's special forces captured the leader of the Islamic State group's branch in Yemen during a raid on a house that was under surveillance, according to a Saudi military statement on Tuesday, dealing a blow to the extremist group which has taken advantage of the country's turmoil to launch devastating attacks.

The IS group, like al-Qaida, expanded and recruited amid Yemen's civil war to further its reach in the southern tip of the Arabian Peninsula.

A spokesman for the Saudi-led coalition at war in Yemen, Col Turki al-Maliki, said the June 3 operation that led to the arrest of Yemen's IS leader, known by his moniker of Abu Osama Al-Muhajir, lasted just 10 minutes. Also captured in the raid was the group's chief financial operator in Yemen and other suspects who were not named, according to the statement.

It was not mentioned in the statement where the men are now being held nor where in Yemen the raid occurred. It also did not provide details on why the Saudi military was announcing the success of the raid three weeks after it took place.

Yemeni tribal leaders said the raid took place in Mahfad district, a stronghold for IS and al-Qaeda, in Yemen's southern province of Abyan. They spoke to The Associated Press on condition of anonymity for fear of reprisals.

Al-Maliki said in his statement that additional details about the operation could not be disclosed at this time and would be made available in the future due to ongoing investigations.

The Islamic State group's Yemen offshoot was formally established in late 2014. Four months later, the Saudi-led war was launched to support Yemen's internationally recognized government, after Houthi rebels overran the capital of Sanaa.  The war has killed tens of thousands of Yemenis and pushed millions to the brink of famine.

The IS group in Yemen, seen as more brutal and less established in Yemen than al-Qaida, has been in fierce competition for influence with the rival militant group

The extremist Sunni group has launched a string of attacks since it was formed. Its most devastating took place in March 2015, when suicide bombers unleashed enormous blasts at two Shi'ite mosques in the capital that killed 137 people. In late 2015, IS militants killed the governor of the southern port city of Aden and, in May 2016, a pair of IS suicide bombings in the same city targeted young men seeking to join the army, killing at least 45.

The IS group in Yemen, seen as more brutal and less established in Yemen than al-Qaida, has been in fierce competition for influence with the rival militant group.  The US has targeted the leadership of al-Qaida in Yemen with drone strikes over the years.

Unlike al-Qaida in the Arabian Peninsula, as the group in Yemen is known, the IS offshoot in Yemen has not been as successful in winning over local tribes. Only a few hundred armed militants were believed to have been fighting for the group as of last year, making it a marginal player in the overall conflict in Yemen, according to the UN Office for the Coordination of Humanitarian Affairs' Relief website.

The Saudi military said its forces managed to capture the IS militants without causing harm to the women and children who were in the house during the raid.

The coalition said the raid took place with cooperation from Yemeni special forces and resulted in the confiscation of weapons, ammunition, laptops, cash, and GPS and communication equipment.

"The operation is considered a significant blow to the terrorist group Daesh (ISIS), especially in Yemen," al-Maliki said, adding that it demonstrates Saudi efforts to combat terrorism.

Al-Qaeda in the Arabian Peninsula, as the Yemeni group is known, has long been considered the network's most dangerous branch and has attempted to carry out attacks on the US mainland.

The tribal leaders Tuesday spoke on condition of anonymity, fearing for their safety.