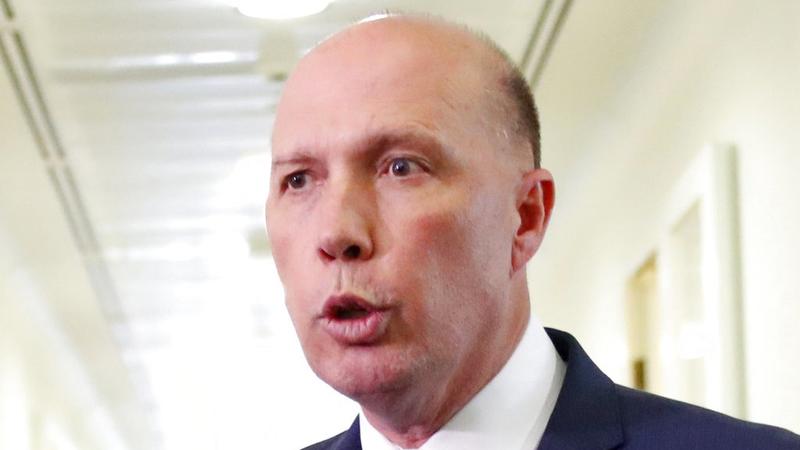 In this Aug 24, 2018, file photo, Australian Home Affairs Minister Peter Dutton, right, speaks to the media after a party meeting in Canberra, Australia. Dutton is facing a sanction after engaging in a war of words with a former Australian Border Force commissioner. (DAVID GRAY / POOL / AP)

CANBERRA - Australia's Minister for Home Affairs Peter Dutton is facing a sanction after engaging in a war of words with a former Australian Border Force (ABF) commissioner.

"He was a man who had groomed a girl 30 years younger than himself. He is discredited and disgraced," Dutton said.

Under Australian law, Members of Parliament (MPs) are granted immunity from civil or criminal liability for actions taken, or statements made, in the course of their legislative duties.

I ... watched Question Time (QT) and heard a minister accuse me of being a sexual predator

Quaedvlieg was dismissed from the ABF in March after a nine-month investigation found that he modified ABF policies so as to advantage a person, in this case his partner, for recruitment.

On Tuesday night he lodged an official complaint with Tony Smith who, as speaker of the House of Representatives, ensures that MPs obey the rules of the house.

"I ... watched Question Time (QT) and heard a minister accuse me of being a sexual predator," Quaedvlieg wrote on social media.

"I've written to the speaker - this is not what privilege is for."

He said he was moved to lodge the complaint when Prime Minister Scott Morrison "endorsed" Dutton's comments during an appearance on Australian Broadcasting Corporation (ABC) television.

"While errors of fact can be made, and tolerated where corrected, personal smears to the tenor of those made by Mr Dutton with respect to his parliamentary statement today that I 'groomed a girl...' are disgusting and offensive and I call on him to formally withdraw that comment," he told the Guardian Australia.

The feud between Dutton and Quaedvlieg stemmed from a Senate inquiry into Dutton's conduct regarding a series of visas granted to au pairs who were refused entry into Australia.

He told the inquiry that he was asked by Dutton's office to help a "mate" of the minister for home affairs with a visa problem.

Dutton rejected that version of events, labelling them false and fabricated.