Bracing up for the transhuman era

As smart technologies pervade our lives like never before, we turn the spotlight on some of HK’s most noteworthy achievers from across different creative fields who engage with artificial intelligence, or the idea of it. The five-part series explores what architects, artists, designers and writers make of the ways in which machines are impacting human society and how they plan to adjust and renegotiate their places in a changing world order where AIs outnumber humans by several folds.

The fourth instalment features new media artist Chris Cheung Hon-him, aka h0nh1m, who wears a metallic surveillance collar with a countdown clock and calls himself a “future generation digital slave”. 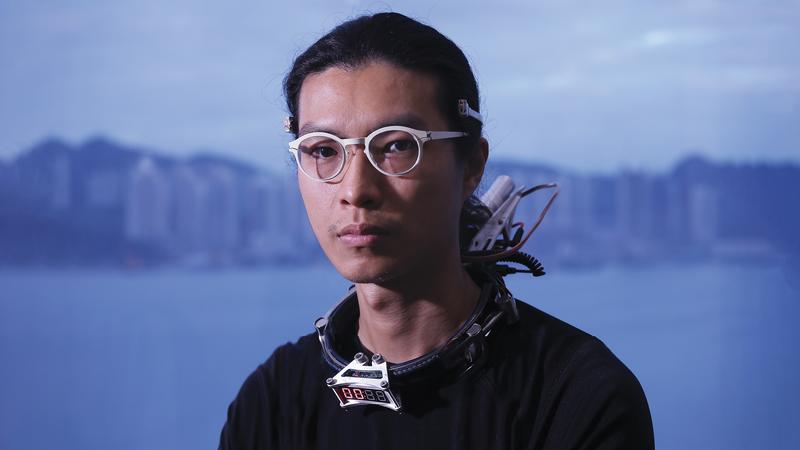 Victor Wong, who created the world’s first, and probably only, artificial intelligence ink artist, A.I. Gemini — a robotic arm that can dip a brush in ink to draw surreal moonscapes — says it was perhaps inevitable that artists should be engaging with artificial intelligence technology at this time. “If you look at the history of art, artists usually go for the newest technology available to them at the time,” he says. “I think AI is the technology of the moment.”

Fellow Hong Kong artist Chris Cheung Hon-him, who goes by the artist name h0nh1m, is already looking beyond the present moment and has a foot in what he calls the “transhuman era”, in which human beings become a fusion of organic and machine parts. In his public appearances, Cheung often wears a heavy metallic collar fitted with bone conduction earphones and a countdown digital clock, with wires and metallic wedges protruding sharply from the back of his neck. This CollarX, as he calls it, could serve as an audio guide, but is also a surveillance device connected to CCTV cameras that can read the behavior of the wearer, tracking and trying to manipulate the choices he makes.

Cheung calls himself a “future generation digital slave”. The CollarX device, flowing black clothes and a pair of glasses whose pronounced white frames look like they are inlaid with metallic wires but probably aren’t are the accoutrements of Cheung’s signature style. The new media artist, whose public persona is a well-crafted and meticulously put-together work of art, has been running a quiet campaign, drawing attention to the yoke of surveillance that a sizeable section of humanity living in urban societies willingly wears by simply carrying a smartphone in their pockets.

“I put on CollarX at some of my recent talks because I believe this is what our future might look like,” says Cheung. “A few decades from now a lot of technology will be implanted in our bodies. Or we might have a synthesized body which will be part human and part machine, containing some kind of AI technology.”

At his 2016 surveillance-themed show, Surviving the Glass System, audiences were made to wear CollarAG, an earlier iteration of CollarX — which was locked around their necks using an electric drill — and asked to complete a tour of the exhibition in 30 minutes flat or face a likely disaster. In spite of the potential but unspecified risk, the show drew a throng of visitors willing to stick their necks out and be harnessed. Cheung believes part of the enthusiasm on display was due to peer pressure. “Everyone wants what others have.”

A much-feted alumnus of the School of Creative Media of the City University of Hong Kong, and a winner of several noted international and local art and design awards, Cheung founded the new media art collective XCEED in 2008.  Since then he has been using advanced technology to create amazing soundscapes combined with mesmerizing images that have a calming, Zen-like effect on the viewer even when they are a commentary on grave environmental crises.

CarbonScape, an interactive soundscape installation, is a case in point. Audiences walk through a cluster of 18 transparent tubes inside which dark spheres indicating carbon dioxide levels around the globe rise up through transparent chimneys in response to ambient sounds, creating a visual symphony.

An amazing synchronicity of music and movements is common to Cheung’s other environment-themed shows — DynamiCity, RadianceScape and RadianceScape Live! The last of these, for example, is an animated digital installation representing a dialogue between live radiation data collected from major cities around the world and compared to those from Chernobyl and Fukushima — the locations of two of the most disastrous radiation leaks from explosions in nuclear power plants in human history. The data, visually represented by a steadily morphing streak of light, travels through 3D maps of different cities around the world like a soaring kite. The imagery is captivatingly beautiful.

When I ask Cheung what comes first between spreading awareness and creating a work of art with aesthetic appeal, he seems reluctant to prioritize one over the other, preferring to make spontaneous choices. “It depends on how and where the inspiration strikes me,” he says.

“Most of my projects are a manifestation of my concerns for the future,” Cheung hastens to add. “There are a lot of concerns about the way humans are evolving and the issues they are faced with. Climate change and AI development are two of those.”

Cheung’s ongoing show, No Longer Write – Mochiji, at Taoyuan Museum of Fine Arts in Taiwan, is an AI-powered interactive installation in which audience-participants are encouraged to try their hand at calligraphy and add the results to a digital pool of works by legendary Chinese calligraphers such as Wang Xizhi, Dong Qichang, Rao Jie, Su Shi, Huang Tingjian and Wang Yangming.

The AI compares the characters drawn by master calligraphers and audience members through a deep learning process and comes up with a set of new calligraphic styles, “combining certain characteristics of the old calligraphy with the new to evolve a completely new style of writing the character,” says Cheung. “It’s like parents from the past and present coming together to give birth to a child.”

Then, in an unexpected plot twist, all the writing on the digital wall, including that added by the audience, blurs. The digital canvas resembles a pool in turmoil in which the characters are tossed around and ultimately disappear.

The image resonates with an apocryphal story about the calligrapher Wang Xizhi who is said to have lacked a natural talent for calligraphy and so practiced his craft every day for many years. “The pond he sat next to while drawing the characters turned black from the continued dipping of his brush in it. In Mochiji I have tried to show how AI can learn from the ancient masters and create a similar texture in just about a second,” says Cheung.

His aim is to raise a number of questions, he says. “Does the writing still mean anything to the AI when it becomes illegible to humans?  Where do the characters disappear after they fade away? The show highlights our fear of machines and new technology.”

I ask him if there is indeed anything about AI that humans ought to be wary of.

“I think it depends on how you use AI,” says Cheung. “There are a lot of misapprehensions about machine learning, because we don’t know about their learning process.” He mentions the news about new chat bots in the market who might be able to communicate between themselves using a language that humans won’t understand.

In Mochiji Cheung wanted to demonstrate the difference between the ways in which humans and AIs read. “When an audience-participant draws a Chinese character, the machine reads the brush strokes in terms of pixels and tries to trace the outline of the character.”

Watching the churning on the digital screen and the blurring of Chinese characters into unrecognizable forms could be a somewhat-confounding experience. “The idea is to inspire audiences to rethink their existing notions of calligraphy, ponder whether we will still be writing by hand in the future. And even if we did will it still be relevant?” Cheung asks.

One of the reasons he chose to use AI for the project was because of its ability to keep coming up with sets of new possibilities. “There isn’t a moment in Mochiji which is a repetition,” says Cheung. “Here the AI is constantly learning and adding new specimens of writing to its database. In a traditional form of art it won’t be possible to demonstrate such quick live interactions with the audience. So a work like this allows me to create a unique experience and engage with the audience.”

What Mochiji also does is visually demonstrate Cheung’s core artistic philosophy of making creative spaces more open and inclusive.  Putting the handiwork of anonymous exhibition visitors in the same space as canonical pieces created by the masters of Chinese calligraphy ties in with such a conviction.

“I have created a platform in the form of Mochiji which will keep evolving and people will keep adding to it,” says Cheung, who believes in French literary critic Roland Barthes’ 1967 thesis that once a work of art is placed in the public domain its author becomes irrelevant.

Unsurprisingly, he is all for open-source generated art projects. It’s an idea that had captured the imagination of Hong Kong artists and designers half a decade ago, when a number of newly opened shared creative spaces gave users access to 3D printing machines and encouraged brainstorming project ideas over a cup of coffee.

Such initial enthusiasm seems to be on a downturn now, says Cheung, one reason being the exorbitant rents in Hong Kong. “It is tough to sustain an open-space ecology in a major center of trade and commerce such as Hong Kong because of the costs of maintaining such a space,” he says.

Meanwhile, Cheung himself continues to share XCEED’s knowledge-programing language and ideas through open-source platforms, using both his resources and art to engage with people in a creative space free of hierarchies.