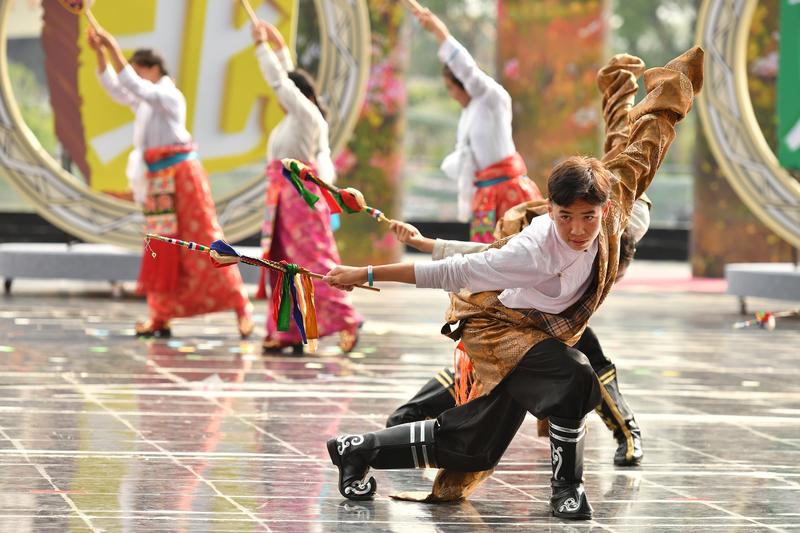 This summer, Beijing Garden Expo Park is abloom. Not just because of the ongoing 2019 International Horticultural Exhibition, but it was also radiant with florescent adolescence, as thousands of festively-dressed teenagers gathered, conversed and performed as part of a recent Joy Dancing Beijing cultural and art exchange.

"These kids are all quite timid, but when they start dancing, you can see their passion."

Teacher and the Artistic Director of Remeng Keba Ensemble, Qinghai

Among them was Dombzhub Tsering, a Tibetan high school boy. "By attending the festival, I have encountered a lot of dance styles I have never seen before and I have learned much about dances from different countries and their cultures," he says.

He and his teammates at the Remeng Keba ensemble from Northwest China's Qinghai province opened the event on Aug 10 by performing The Great Mountain Peak, a folk dance featuring original choreography that illustrates a local ritual to offer sacrifices to the mountain gods.

"These kids are all quite timid, but when they start dancing, you can see their passion," says Wang Hongbo, their teacher and the artistic director of the ensemble.

Set up in 2014 by Wang and several other voluntary teachers, the troupe aims to help the Tibetan children receive more educational opportunities. For the troupe's name, Keba is a reference to the name of their village, that lies deep in the mountains of Hualong Hui autonomous county in Qinghai, while Remeng means "fervent dreams".

This is the sixth time that the troupe has participated in the annual event. Wang and other teachers seek every opportunity to broaden the horizons of the children.

"The first time I took them to this festival, they were shocked by the scale of such a gala. They saw so many things that they were never aware existed," Wang says.

According to Wang, by joining in the ensemble, quite a few teenagers from the village have gone on to study the performing arts at university in big cities. Dombzhub Tsering also aspires to continue his studies when he graduates from high school, with his greatest aspiration being to study drama at an art college in Beijing.

An exchange week for international youth, this year's event welcomed over 5,000 participants from 13 countries, including Russia, Germany, Peru and India. Many performers showcased traditional dances from their own countries. 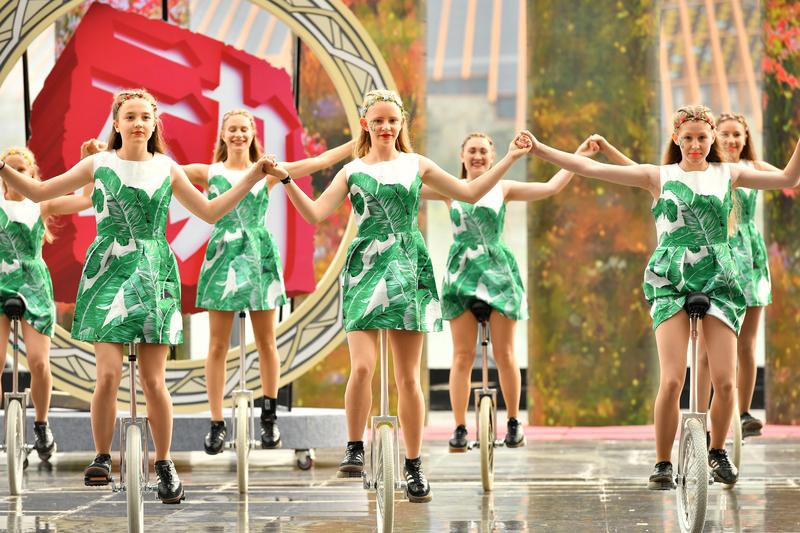 Peruvian students from the Juan XXIII Peruvian-Chinese School brought Pallas de Corongo, a local dance style that is treasured as a folk culture heritage. The female dancers were lavishly dressed, each wearing a circular head garment, big sleeves and multiple layers of petticoats, adorned with embroidery, lace and brooches.

Although easy on the eye, the outfits were not as easy on the body. Several student performers said that the head piece was painful to wear, but the physical toll did not dampen their enthusiasm for being a part of this exchange event.

"We study in a Peruvian Chinese school, so we have known a lot of Chinese people and have heard a lot of beautiful things about China. I love this experience," says Brenda Escajadillo, one of the students.

Another student Fabiana Mena adds: "We get to experience and learn about Chinese culture. It is so different from reading about it in the news or hearing stories from other people."

While traditional art forms are a major part of the festival, many countries also brought elements of pop culture, or performance art that holds a special appeal to youth, such as street dance from South Korea.

With their professional techniques, teenagers from Einradkids Hamburg, a unicycle club in Germany, proved that persisting in childhood hobbies can also help performers shine on the big stage.

"The unicycle club is a pretty big deal where we live, and a lot of young girls start unicycling at a really young age. Most of my friends started doing it when they were around 4 or 5 years old. We just stuck with it. It's fun," says Pauline Scholl, who has been practicing unicycle for 14 years.

The festival also included a variety of activities offering students the chance to learn about diverse cultures. They performed at the Beijing Museum of Natural History, traveled to Beijing's iconic historical landmarks, and went on field trips to study traditional Chinese cultural elements such as calligraphy.

"We hope that young Chinese people can act as messengers to promote our culture. Meanwhile, teenagers can come to our event to communicate with peers from around the globe and, in this way, develop a holistic world view," says Guo Haixia, founder of the exchange week.