UN report: Up to 30,000 Islamic State members in Iraq, Syria 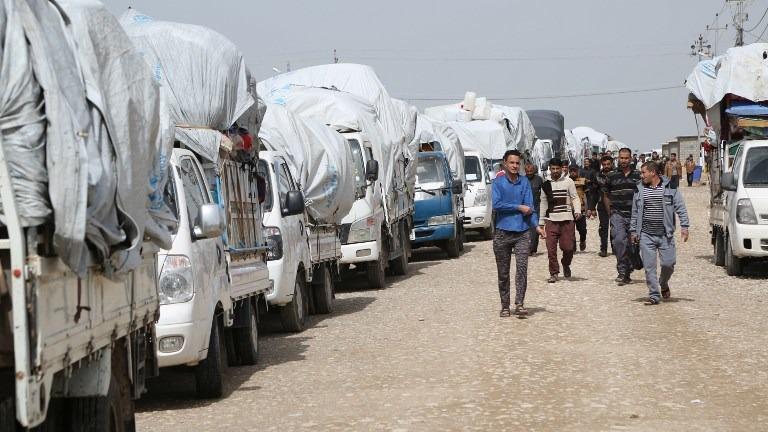 Iraqi civilians from the Hawija region who were displaced by fighting with Islamic State (IS) group fighters walk past government-hired trucks waiting to return them home from the Laylan camp, 25 kilometres east of the northern city of Kirkuk, on March 30, 2018. (MARWAN IBRAHIM / AFP)

UNITED NATIONS — The Islamic State extremist group has up to 30,000 members roughly equally distributed between Syria and Iraq and its global network poses a rising threat — as does al-Qaida, which is much stronger in places, a United Nations report says.

The report by UN experts circulated Monday said that despite the defeat of IS in Iraq and most of Syria, it is likely that a reduced "covert version" of the militant group's "core" will survive in both countries

The report by UN experts circulated Monday said that despite the defeat of IS in Iraq and most of Syria, it is likely that a reduced "covert version" of the militant group's "core" will survive in both countries, with significant affiliated supporters in Afghanistan, Libya, Southeast Asia and West Africa.

The experts said al-Qaida's global network also "continues to show resilience," with its affiliates and allies much stronger than IS in some spots, including Somalia, Yemen, South Asia and Africa's Sahel region.

Al-Qaida's leaders in Iran "have grown more prominent" and have been working with the extremist group's top leader, Ayman al-Zawahri, "projecting his authority more effectively than he could previously" including on events in Syria, the experts said.

The report to the Security Council by experts monitoring sanctions against IS and al-Qaida said the estimate of the current total IS membership in Iraq and Syria came from governments it did not identify. The estimate of between 20,000 and 30,000 members includes "a significant component of the many thousands of active foreign terrorist fighters," it said.

While many IS fighters, planners and commanders have been killed in fighting, and many other fighters and supporters have left the immediate conflict zone, the experts said many still remain in the two countries — some engaged militarily "and others hiding out in sympathetic communities and urban areas."

IS fighters swept into Iraq in the summer of 2014, taking control of nearly a third of the country. At the height of the group's power its self-proclaimed caliphate stretched from the edges of Aleppo in Syria to just north of the Iraqi capital, Baghdad.

With its physical caliphate largely destroyed, the Islamic State movement is transforming from a "proto-state" to a covert "terrorist" network, "a process that is most advanced in Iraq" because it still controls pockets in Syria, the report said.

The experts said the discipline imposed by IS remains intact and IS leader Abu Bakr al-Baghdadi "remains in authority" despite reports that he was injured.

"It is just more delegated than before, by necessity, to the wider network outside the conflict zone," the experts said.

The flow of foreign fighters to IS in Syria and Iraq has come to a halt, they said, but "the reverse flow, although slower than expected, remains a serious challenge."

While the rate of terrorist attacks has fallen in Europe, the experts said some governments "assess that the underlying drivers of terrorism are all present and perhaps more acute than ever before." This suggests that any reduction in attacks is likely to be temporary until IS recovers and reorganizes and al-Qaida "increases its international terrorist activity or other organizations emerge in the terrorist arena," they said.

The experts looked at the threats posed by IS and al-Qaida by region:

—ARABIAN PENINSULA: Al-Qaida's leaders recognize Yemen "as a venue for guerrilla-style attacks and a hub for regional operations." Yemen's lack of a strong central government "has provided a fertile environment for al-Qaida in the Arabian Peninsula." Its strength inside Yemen is estimated at between 6,000 and 7,000, compared with only 250 to 500 IS members in the conflict-wracked country.

—NORTH AFRICA: Despite the loss to IS of the Libyan city of Sirte and continued airstrikes, the extremist group "still has the capacity to launch significant attacks within Libya and across the border, reverting to asymmetric tactics and improvised explosive devises." Estimates of IS members vary between 3,000 and 4,000, dispersed across Libya. Up to 1,000 fighters in Egypt's Sinai peninsula have pledged allegiance to IS leader al-Baghdadi. Al-Qaida is also continuing a resurgence in Libya.

—WEST AFRICA: An al-Qaida-affiliated coalition has increased attacks on French, U.S., U.N. and other international interests in the Sahel. Al-Qaida in the Islamic Maghreb has urged attacks on French private companies. The Islamic State in the Greater Sahara is active mostly at the Mali-Niger border and has less of a footprint. "Member states assess that terrorists are taking advantage of territorial control and ethnic conflicts to radicalize populations."

—EAST AFRICA: The al-Shabab extremist group in Somalia, an al-Qaida affiliate, "remains the dominant terrorist group" in that country, with improvised explosive devices "its weapon of choice." Despite sustained military action against al-Shabab, "the group has enhanced its capabilities as it retains its influence and appeal." Member states said IS in Somalia "is fragile and operationally weak," but "it still presents a threat" because the country remains a focus for possible future operations.

—EUROPE: During the first six months of 2018, "the threat in Europe remained high" but "the tempo of attacks and disrupted plots was lower than during the same period in 2017." Much activity involved individuals with no prior security records or deemed low risk. IS used the media to urge sympathizers in Europe to conduct attacks in their home countries. Member states expressed concern that returnees could disseminate knowledge and skills related to making drones, explosive devices and car bombs.

—CENTRAL AND SOUTH ASIA: According to an unidentified U.N. member state, IS poses an immediate threat in the region but al-Qaida is the "intellectually stronger group" and poses a longer-term threat. Some leaders of the al-Qaida "core," including al-Zawahiri and Osama bin Laden's son, Hamza, are reported to be in Afghanistan-Pakistan border areas. IS continues to relocate some key operatives to Afghanistan. One unidentified government reported newly arrived IS fighters from Algeria, France, Russia, Tunisia and central Asian states.

—SOUTHEAST ASIA: Despite last year's heavy losses in the Philippines, IS affiliates in the country "are cash rich and growing in membership." Intermediaries facilitated financial transfers from the IS "core" to Philippines affiliates and arranged bomb-making and firearms training for recruits from Indonesia at camps in the Philippines. Attacks in Indonesia by an IS-linked network using families as suicide bombers could become "a troubling precedent."