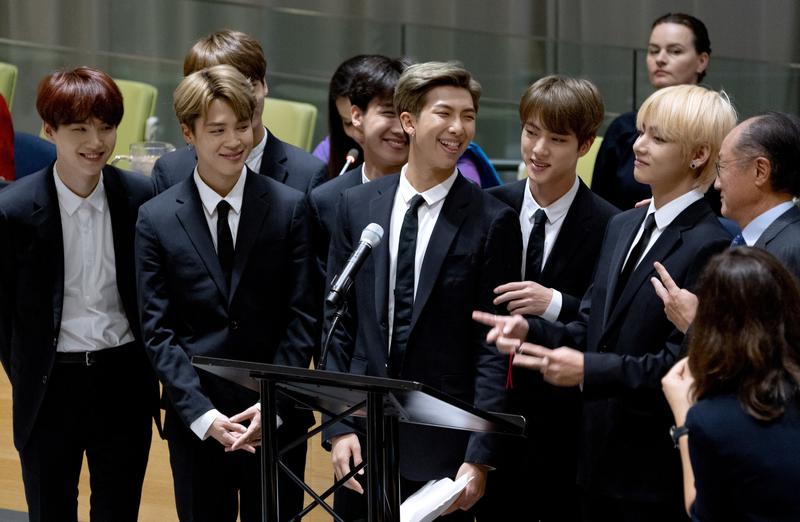 In this Sept 24, 2018, photo, members of the Korean K-Pop group BTS attend a meeting at the UN high level event regarding youth during the 73rd session of the United Nations General Assembly, at UN headquarters. (CRAIG RUTTLE / AP)

TOKYO — A Japanese broadcaster canceled a live TV appearance of the Korean band BTS after a photo went viral of a band member wearing a T-shirt showing an atomic bombing juxtaposed with the celebration of Korea's liberation from Japan after World War II.

Japanese social media was filled with chatter over the photo of Jimin wearing the shirt with an image of a mushroom cloud with the English words "patriotism" and "Korea." TV Asahi said it had talked with the band's recording company to try to learn why he wore the T-shirt. The broadcaster's statement also apologized to viewers who had looked forward to the band's appearance, which had been scheduled for Friday.

Universal Music said it will continue to support BTS but confirmed their appearance on the live music show Music Station was canceled.

South Korean K-pop and movie stars are extremely popular in Japan, sometimes in stark contrast to the controversy and hostility than can mark other aspects of the two nation's ties due to Japan's occupation of the Korean Peninsula in the early 20th century until the end of World War II.

Some Japanese fans of the band expressed disgust on Twitter that their show was canceled over a T-shirt.

The seven-member BTS has collaborated with Japanese American DJ and musical artist Steve Aoki and has reached No 1 on the Billboard chart.