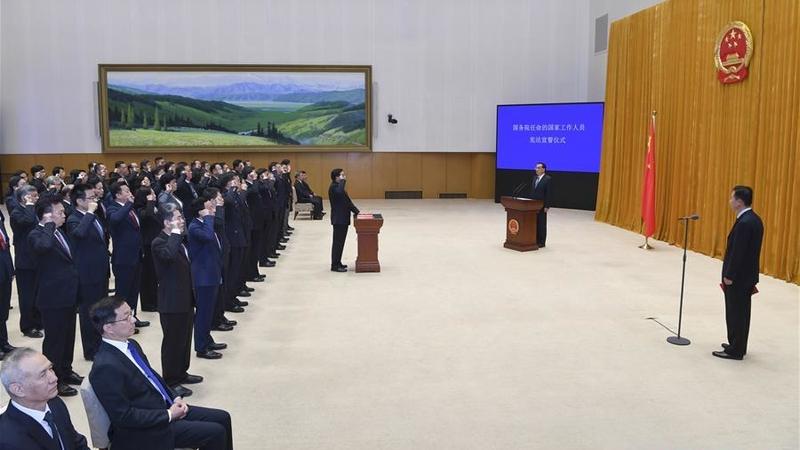 Senior officials of the State Council take an oath of allegiance to the Constitution at a ceremony, which is overseen by Premier Li Keqiang, in Beijing, capital of China, Nov 20, 2018. (ZHANG LING / XINHUA)

BEIJING - China will launch its first Constitution Week publicity campaign from Dec 2 to 8, according to an official circular released Monday.

Leading officials and public servants should take the lead in learning, observing, upholding and being allegiant to the Constitution, and better employ the rule-of-law thinking and approaches to solve problems, according to the circular.

Constitution Week is part of a month-long publicity campaign for this year's Constitution Day, which falls on Dec 4

It called for extensive Constitution education for Chinese youth and improved Constitution publicity in the whole society, including enterprises, rural areas, government organs, communities and cyberspace, in a manner welcomed by the public.

The circular was jointly issued by the Publicity Department of the Central Committee of the Communist Party of China, the Ministry of Justice, and the national office for law popularization.

The document underlined the responsibility of various authorities to advance Constitution publicity and education in legislation, law enforcement, judicial work and legal services.

Constitution Week is part of a month-long publicity campaign for this year's Constitution Day, which falls on Dec 4.