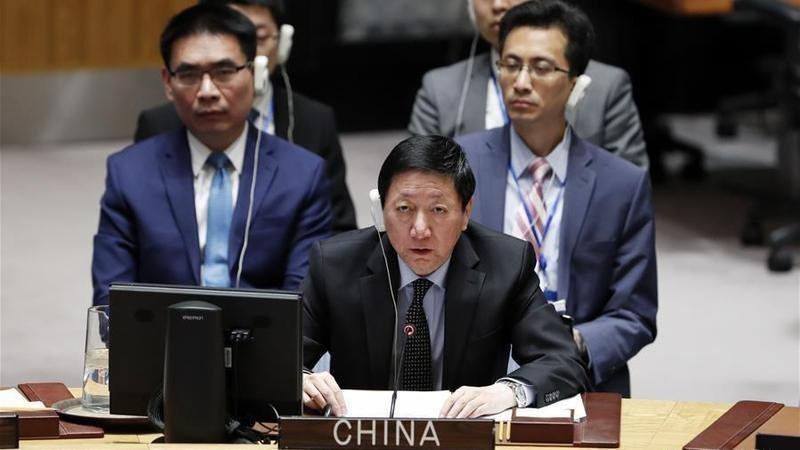 In this April 9, 2018 photo, Wu Haitao, China's deputy permanent representative to the United Nations, addresses a meeting of the UN Security Council at the UN headquarters in New York. (LI MUZI / XINHUA)

UNITED NATIONS — A Chinese envoy on Friday called for the improvement of UN peacekeeping through mandate optimization, capacity building and partnerships.

"Since 1948, the Blue Helmet has become the symbol of the United Nations, bringing peace and hope to the world. In the face of the new situation and new challenges, UN peacekeeping needs to keep pace with the times and strive for improvement," said Wu Haitao, China's deputy permanent representative to the United Nations.

The mandate needs to be realistic, actionable, and targeted instead of trying to be everything everywhere

Wu said that improving the operation mandate is the foundation. "The mandate needs to be realistic, actionable, and targeted instead of trying to be everything everywhere."

Wu urged the international community to pay serious attention to the actual needs of troop-contributing countries (TCCs), especially those from the developing world, and provide them with the required resources for peacekeeping, saying that enhancing capacity building is the key.

The UN Secretariat should develop uniform standards for the organization, training, and supervision of peacekeepers, he said.

While strengthening peacekeeping performance, it is necessary to ensure the safety and security of peacekeepers, Wu added.

Wu also stressed the need for strong partnerships in peacekeeping. "Host countries, TCCs, and fund-contributing countries should form synergy. The UN should also continue to deepen its cooperation with regional and sub-regional organizations."

In evaluating peacekeeping performance, there should be indicators for both peace and development, he said. "Peacekeeping operations also need to create safe and stable environments for host countries to achieve poverty eradication and promote peace through development so as to secure sustainable peace."

Peace and security has become a priority in China-Africa cooperation. China will continue to provide assistance to the African Union in support of its initiative to silence the guns in Africa by 2020, he added.

As the second-largest financial contributor to UN peacekeeping and the largest TCC among the five permanent members of the UN Security Council, China stands ready to continue working with all other countries to promote a greater role of UN peacekeeping, said the envoy.