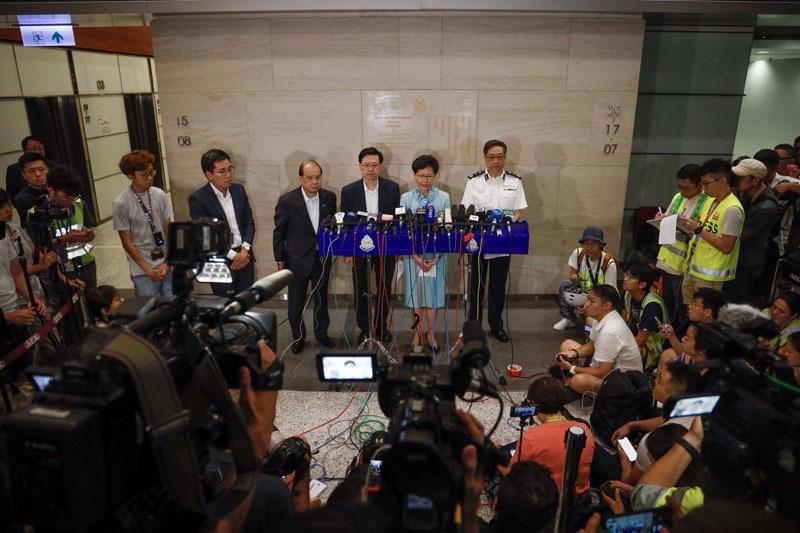 Following is the transcript of remarks by the Chief Executive, Carrie Lam; the Chief Secretary for Administration, Matthew Cheung Kin-chung; the Secretary for Security, John Lee; and the Commissioner of Police, Lo Wai-chung, at a media session on July 2, 2019.

Chief Executive: Let me just repeat very briefly what I have said in Cantonese. On July 1, that is the 22nd anniversary of the establishment of the Hong Kong Special Administrative Region, we have seen two entirely different public scenes. One is a regular march on July 1. Regardless of the number of participants in the march, the march was peaceful and generally orderly, and this fully reflects the inclusiveness of Hong Kong society and the core values we attach to peace and order. The second scene that we have seen, which really saddens a lot of people and shocks a lot of people, is the extreme use of violence and vandalism by protesters who stormed into the Legislative Council (LegCo) building over a period of time. This is something that we should seriously condemn because nothing is more important than the rule of law in Hong Kong. I hope community at large will agree with us that with these violent acts that we have seen, it is right for us to condemn it and hope society will return to normal as soon as possible.

READ MORE: CE Carrie Lam vows to get HK to a new start

Reporter: Mr Lo, Police Commissioner, can you tell us why there were no police officers inside LegCo building? What kind of games is the police playing? Are you setting a trap on protesters? And Mrs Lam, sorry, I have a second question for you. Do you feel that personally you are responsible for the violence tonight because of your lack of positive response to the protesters’ demands? Thank you.

Commissioner of Police: Let me answer first, I totally disagree with what this gentleman has just said.  We had officers inside the LegCo defending LegCo for nearly eight hours. During the period, we had been under siege of the protestors. They kept on using violent tactics to try to intrude into the LegCo. It was until nine o’clock at night time, several incidents happened that made us to do a temporary retreat.

First of all, there were many protestors outside the LegCo main entrance and they were starting using violent tactics to charge the inner door of the LegCo.

Secondly, due to the local environment, we were unable to use some of the force that we could use in open ground.

And lastly, but not the least, during the charging they threw in some white smokes. As you know there was already a toxic powder attack on my officers in the afternoon. So without knowing whether this was another toxic powder attack, we had no other choice but to temporarily retreat from the LegCo.

Before we retreated, we had already asked the LegCo security to appeal to all working staff within the LegCo to leave due to the incident. And by 9pm, we had been told that all working staff had left. That meant we were sure that no other civilians were within the building, so my officers had no choice but to temporarily retreat, to do a regrouping and to do some redeployment to take back LegCo later on.

Chief Executive: It is not true to say that the Government has not responded. We have not responded to every demand asked because of good reasons. First of all, if the cause of the social tensions that we have seen is a bill to amend the Fugitive Offenders Ordinance, on June 15 I have announced the suspension of the bill. Subsequently we have explained and elaborated that by suspending the bill at this point in time with no timetable and no plan to resume the debate of the bill in the Legislative Council, the bill will expire, or the bill will die, in July 2020 when the current LegCo term expires. That is a very positive response to the demands that we have heard.

As for some of the other demands, let me come back to this very important principle of the rule of law. To demand the Government, without any investigation and checking with the law about whether offences have been made, that we should release everybody arrested, we should not take any follow-up action against some of the violent acts we have seen or even to grant an amnesty to all those involved in these protests, all these will not be in accordance with the rule of law. The rule of law is exactly what I have been talking tonight. I hope we all agree that this is something of paramount importance to Hong Kong and will continue to guide the Government's reactions and responses to social issues and to demands and aspirations of our people.